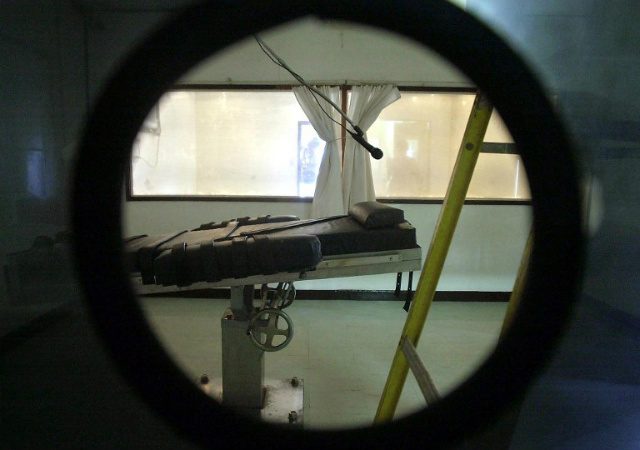 MANILA, Philippines – A week after Indonesia postponed the execution of Filipino worker Mary Jane Veloso, the Philippines said it is closely watching the cases of 92 Filipinos on death row around the world.

In an interview on ANC’s Beyond Politics, Philippine Foreign Undersecretary for Migrant Workers’ Affairs Jesus Yabes also said the country is ready to help 3,800 Filipinos jailed in other countries.

“We monitor them, and we have a program of visits for the family,” Yabes said in an interview aired Tuesday evening, May 5.

Yabes explained that most of the Filipinos on death row were convicted for murder and drug-related offenses. One of them was convicted for espionage in Qatar.

He added that “only person right now” who faces imminent execution “is the one in Saudi Arabia.”

He said the Philippine government vows to help any Filipino on death row “whether the person is guilty or not.” He said, “So long as these are Filipinos who are abroad and are in stress situations, then we assist.”

Migrant workers’ rights advocate Susan Ople pointed out, however, that the government needs to reform its processes to help migrant workers on death row.

“There’s a lot to be done. Just handling the families alone, you really have to show a great degree of compassion,” she said.

Ople cited the case of Veloso’s mother, Celia, who drew criticism for denouncing the Philippine government even if it helped seek a reprieve for her daughter.

Sentenced to death for drug smuggling, Veloso was supposed to be executed on April 29, but Indonesia delayed her execution because of Aquino’s last-minute appeal. (READ: DFA hits Velosos’ claims: We helped Mary Jane)

Ople said she understands the Veloso family’s situation because the 30-year-old Filipino worker’s case has been an “emotional roller-coaster for them.”

To better handle cases like this, she urged the Philippine government to create “a special body that looks into victims’ assistance” in “death row cases or all major cases.”

There are roughly 10 million Filipinos working overseas – many as maids, laborers and in other low-paid jobs – because there are few job opportunities at home.

With many coming from poor farming areas and lacking in street smarts, they are easy pickings for international crime gangs on the hunt for drug mules, migrant workers’ group Migrante said. – with reports from Agence France-Presse/Rappler.com