May 14, 2015 1:15 AM PHT
Bea Cupin
Facebook Twitter Copy URL
Copied
(UPDATED) 'Considerable amounts' of US dollars were transferred from the Philippines to Canada during the years that two controversial buildings were being constructed in Makati City, says the Court of Appeals resolution 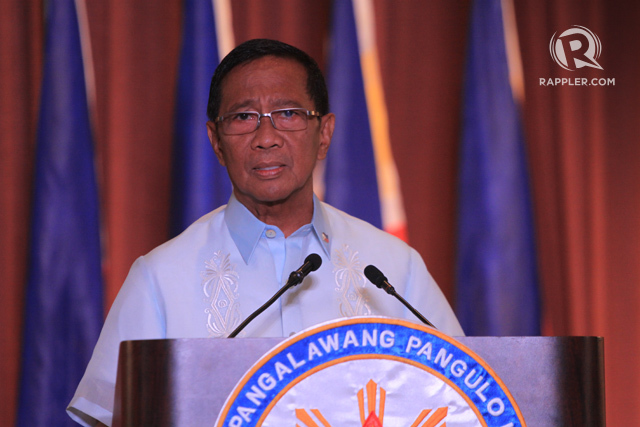 MANILA, Philippines (UPDATED) – Why were Vice President Jejomar Binay and his financial officer Gerardo “Gerry” Limlingan Jr, transferring “considerable amounts” of US dollars from the Philippines to Canada between 2008 and 2014?

It’s among the questions that arise from findings of the investigation into the alleged anomalies of Binay during his decades-long stint as mayor of Makati. (READ: Binay ‘dummies’ closing accounts since Senate probe)

Binay is at the center of a months-long Senate probe and is the subject of graft complaints before the Ombudsman, alongside his son, incumbent Makati Mayor Jejomar Erwin Binay Jr.

The Binays’ detractors allege that father and son earned from the construction of the Makati City Hall Building II and the Makati Science High School building during their terms as mayor.

The Vice President is also accused of earning from what his critics call a lopsided deal between the Boy Scouts of the Philippines (BSP) and land developer Alphaland. Binay has been the national president of the BSP for close to two decades.

“Considerable amounts of US dollars were transferred from Philippine to Canadian banks in the years of 2008 to 2014, the period when the subject buildings were constructed,” read the Court of Appeals’ May 11 resolution. 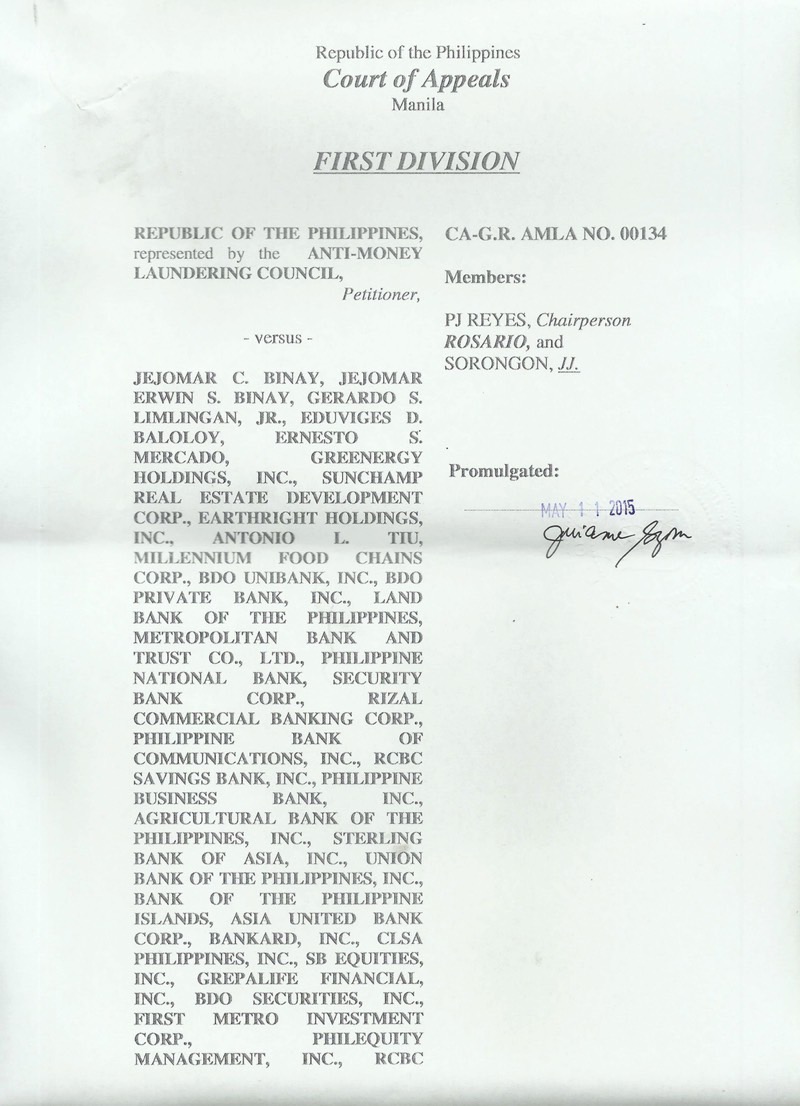 The resolution, which freezes the bank accounts of Binay and his supposed dummies, emphasized the urgency in its decision, noting that some of the accounts covered by the order, were closed after the Senate Blue Ribbon sub-committee began its probe in August 2014.

“The US dollar transfers originated from accounts held either individually by Limlingan and VP Binay at [RCBC], [Metrobank], or [BDO],” read the resolution, a copy of which was given to the media by former Makati vice mayor and chief whistleblower Ernesto Mercado.

Other accounts the AMLC monitored include 3 accounts owned by Binay at BDA, Metrobank Sta. Ana, and Landbank in Makati City, and Binay’s and Limlingan’s two joint accounts at BDO JP Rizal, and another account owned by Binay, Limlingan and a certain Lily Hernandez Crystal in Metrobank.

“The AMLC observed large and frequent transactions made between the period of 2008 to 2014 involving the aforementioned accounts of VP Binay, maintained individually or jointly with either Limlingan or Lily Hernandez Crystal,” read the CA resolution.

The “large and frequent transactions,” according to the AMLC, “were not commensurate to the income declared by VP Binay in his SALN for said years.”

The AMLC also observed other transactions in Binay’s other accounts, this time with Security Bank, PNB, RCBC Savings Bank – accounts under Binay’s name or owned jointly with Limlingan and Crystal from 2008 to 2012.

His camp had previously said this was caused by some P13.5 million in excess campaign contributions. Fresh off his electoral win, Binay’s net worth increased by almost P13 million – from P44.8 million in 2009 to P58 million by the end of 2010.

Limlingan received a monthly salary of P30,000 in 2011 and 2012, the AMLC noted, citing figures from the Landbank of the Philippines. Baloloy, meanwhile, also got her salary from the Makati City government.

“The AMLC’s investigation would however disclose that in 2007 to 2014, cash deposit transactions, majority of which were in million of pesos, were applied to the individual and joint accounts maintained by Limlingan and Baloloy in BDO, Metrobank and Security Bank,” the CA resolution read.

Transactions flagged by the AMLC do not end there. The AMLC monitored “other large transactions made in 2007 to 2014 in the joint accounts maintained by Baloloy and Limlingan with other individuals likewise allegedly associated with VP Binay.”

Another alleged dummy of Binay, businessman Antonio Tiu, was also flagged by AMLC as having transactions that did not match his and his business’ income. Mercado himself had “considerable amounts of money” deposited to his accounts from 2007 to 2014.

“The amount of money involved in these transactions [was] not commensurate to the income and net worth he declared in his SALNs for the said years,” the CA said of Mercado, citing the AMLC report.

Some 242 accounts, 5 of which are owned solely by VP Binay, have been ordered frozen by the CA over the AMLC account. The other accounts also frozen include those owned by Mayor Binay, Binay’s alleged dummies – including Limlingan, Baloloy, and Tiu.

In a statement on Friday, May 15, Joey Salgado, head of media affairs at the Office of the Vice President, scored the AMLAC report for claiming, as reported in the media, that money transfers made by the Binays to Synnovate, Synnovate Ltd. and David Rink Consultancies in Canada were illegal.

“Had AMLAC bothered to do a simple Google check, they would have known that these companies are legitimate market research companies. They were paid for services rendered.,” Salgado said.

“This is another clear proof that AMLAC misled the Court of Appeals into issuing the freeze order. Now, the publication of the leaked report is misleading the public, which was the objective of those behind the leak,” he added. – Rappler.com