Miriam to PH: Use int’l deal vs Canada garbage 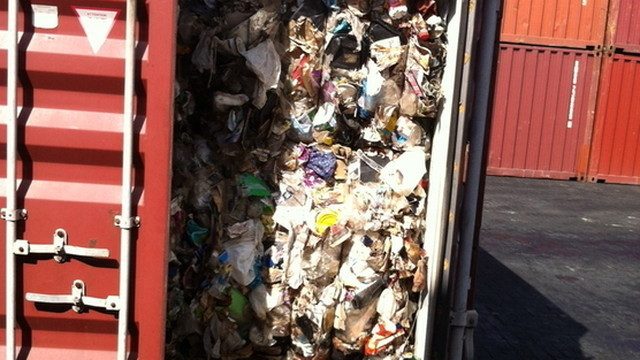 MANILA, Philippines – “This issue goes beyond waste management and threatens our sovereignty. I am alarmed that the government seems willing to say that we are an international trash bin out of fear of ruffling Canada’s feathers.”

Senator Miriam Defensor Santiago said on Sunday, May 17, that the Philippine government should force Canada to take back the garbage illegally shipped to the country by citing an international agreement.

In Senate Resolution No. 1341, the chairperson of the Senate committee on foreign relations said that Canada should be held responsible for exported waste under the Basel Convention.

Around 50 container vans that arrived in the Philippines in batches since 2013 contain mixed garbage such as non-recyclable plastics, household wastes, and used adult diapers. The shipments were misdeclared as “plastic scraps.”

Under Article 9 of the Basel Convention, hazardous and other wastes illegally moved overseas should be “taken back by the exporter or the generator, or if necessary, by itself into the State of export” within 30 days after discovery of the “illegal traffic.”

The country of origin “shall not oppose, hinder or prevent the return of those wastes.”

In 2014, the senator also filed Senate Resolution no. 919, which urged her colleagues to investigate the issue in aid of legislation.

Santiago pointed out that the “willingness” of the government to tolerate the trash seems to be out of fear of straining bilateral ties.

Canadian Ambassador Neil Reeder told the Philippine Department of Foreign Affairs (DFA) in April that “[Canada] would like to explore with the Philippines options for processing the rest of the shipment – in accordance with Philippine law – in the Philippines.” (READ: Canada wants illegal garbage ‘processed in PH)

Yet if the request is accepted, the senator said that it might set a bad image for the country.

“The decision to process the waste in the Philippines upon the request of the Canadian government sets a dangerous precedent for other countries to dump their waste in Philippine soil with impunity,” she said.

Despite calls from various environmental and labor groups, Philippine President Benigno Aquino III did not bring up the issue with Prime Minister Stephen Harper during his state visit to Canada earlier this month. – Rappler.com