The residents of Pag-asa: Life on a disputed island

May 18, 2015 4:00 PM PHT
Carmela Fonbuena
Facebook Twitter Copy URL
Copied
For decades, Pag-asa residents have been oblivious to sporadic incidents elsewhere in the West Philippine Sea. But now they see China's massive reclamation in the area and know that times have changed.

He did not give it much thought when his foreman first told him about the assignment. Jobs were scarce. He was single and had no responsibilities to leave behind. He expected to be back home as soon as they finished the job. 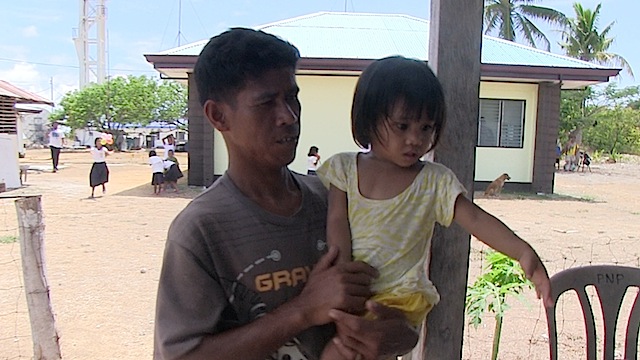 “I came from the town of Roxas in Palawan for a construction work. I ended up liking it here. I later became an employee of the municipal hall,” Dacumos told Rappler in Filipino.

He has sailed back home a few times, but it’s here where he had chosen to build a life and a family. “It’s quiet here. Life is good. We are able to save because everything is free,” he added.

Dacumos and a little over a hundred others constitute a small Filipino community in the island about 300 nautical miles from mainland Palawan. Everything they need to survive in a place that cannot grow rice or corn is provided to them by the local government – housing, solar home system for electricity, and food packages that include 14 kilos of rice per person a month, cooking oil, canned good, noodles, salt and sugar.

There’s cable TV signal for those who can afford the monthly fees, and the municipal government is working to connect the school library to the Internet.

Pag-asa, a Filipino word which means hope, is a barangay (village) and the political seat of power of Palawan’s municipality of Kalayaan (Freedom) that was established in 1978. Indeed, the second biggest naturally occurring island located outside the country’s 200 nautical miles exclusive economic zone (EEZ) brings hope that the small nation can protect its claims in the world’s busiest trade route which is also believed to be rich in oil and natural resources.

Kalayaan Mayor Eugenio Bito-onon, who came from Palawan’s Brooke’s Point town, arrived on the island on a C-130 plane in 1997 after taking the job as municipal planning officer. There were only about 20 residents then, he recalled, because it was previously reached only by Filipino troops manning military outposts. Aside from the runway, the municipal hall, multi-purpose hall, and a 5-bed lying in clinic were already in place when he arrived.

“When I saw the place, I said ‘This is so beautiful.’ It’s an island. It’s like a resort. But most of the people here were soldiers,” Bito-onon said in Filipino.

He witnessed the civilian population grow. Most of them were visiting construction workers like Dacumos, municipal employees like the mayor, and their relatives.

“It’s not so hard to live in the island. The government is very supportive. We’re just like a big family,” Bito-onon told Rappler in Filipino.

“Basta yung mga matakaw sa alak at basagulero, pinapauwi ko para di makahawa. Nakakaipon na rin ang mga matino at matibay sa isla (I send home those who turn out to be drunkards and troublemakers so they don’t influence the residents. The good ones are able to save.),” he added. 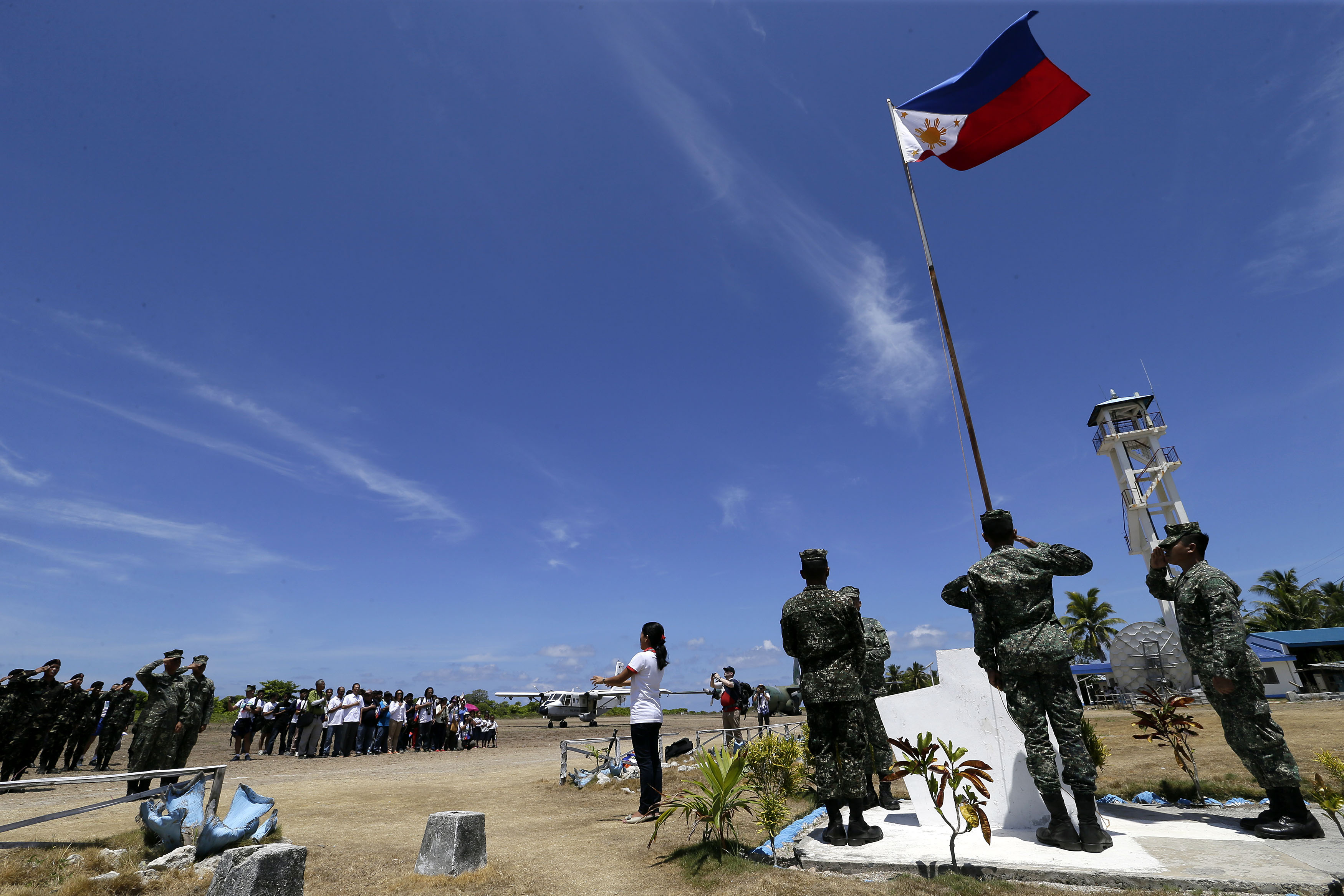 Over time, Palaweños have heard about the freebies on the island. Many wanted to move here, but Bito-onon said he has to limit the population to 120 to protect the vegetation. “The forest might be denuded if we accommodate more because we rely on firewood to cook. Transportation is difficult. We cannot bring in cooking gas,” he said.

There’s no harbor on the island, a project that has been repeatedly delayed by lack of funding or by protests from China. Ships have to dock 2 kilometers away from the shore, making the movement of supplies to the island very difficult.

“We need a harbor. It’s okay if they forget our other wishes. Just give us a harbor and we’ll take care of the rest,” Bito-onon said.

For decades, the island residents have been generally oblivious to sporadic incidents elsewhere in the West Philippine Sea. They’ve regarded these tensions faraway as matters to be settled diplomatically.

But they know times have changed. They watched China begin reclamation early this year in nearby Subi (Zamora Reef). Only 14 nautical miles away, the cranes are visible to the naked eye. Residents also speak of how light from Subi Reef twinkles at night.

(We have a good view of the high-rise crane. There are several instances when warships try to run after us or they cross our bow. All of these are affecting the residents. But they’ve been here for a while. They won’t be scared away so easily.)

It’s a distraction that families here would rather not have. Take the case of Randy and Gloria.

Randy met his wife Gloria here. She’s a widow with two children from Palawan’s Taytay municipality. She arrived in Pag-asa much earlier than Randy upon the prodding of her brother, whose wife was also a former municipal hall employee.

Gloria also thought she would only come to visit and then take the next ship back home. But fate had other plans.

It was Bito-onon himself who wed them in a ceremony in the summer of 2014 after the birth of their daughter. 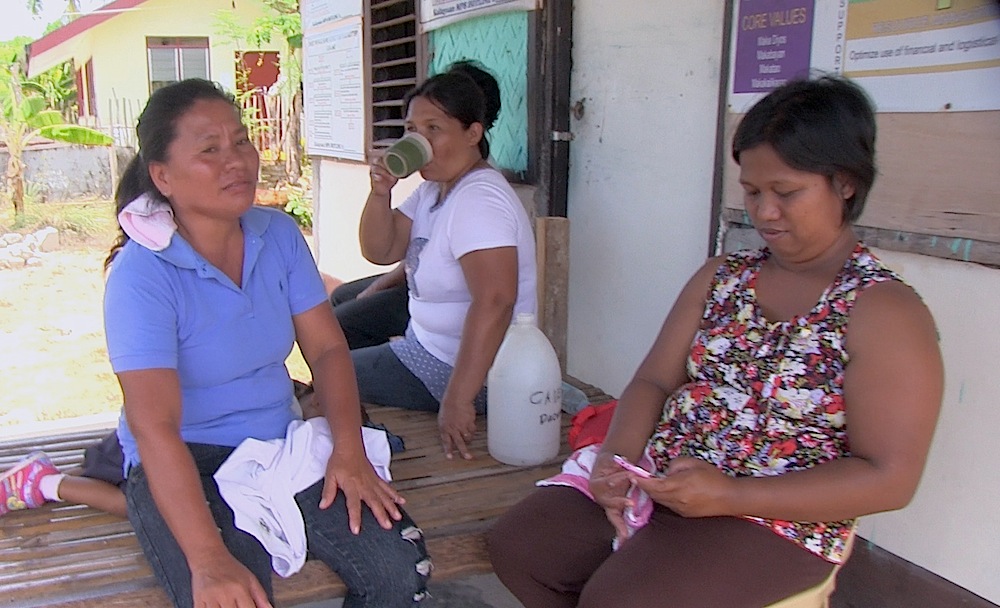 They started a new family as the region saw massive changes.

When Randy arrived in 2008, Gloria Macapagal-Arroyo was president and the country entered into a joint exploration agreement – the Joint Marine Seismic Undertaking (JMSU) – with China and Vietnam.

She ushered in years of friendship with China following disputes over its occupation of Mischief (Panganiban) Reef in 1995 while Filipino troops were away to take shelter from a bad weather and what the Philippines called “creeping invasion” when it constructed structures in the reef in 1999. Fidel Ramos and Joseph Estrada were presidents, respectively, during the two incidents inside the country’s EEZ.

But while Arroyo’s JMSU calmed the seas, she was accused of treason because the site of the JMSU is 80% within the country’s EEZ.

Her critics linked the JMSU to the controversial and allegedly graft-ridden loans extended by China – North Rail and national broadband deal projects, among others – as the supposed reward for Philippine officials for “selling out” the Philippines.

President Benigno Aquino III would succeed her in 2010 and tension with China resumed following the discontinuation of the JMSU.

Two years later, in 2012, the situation exploded into a naval standoff in Scarborough Shoal off the coast of Zambales province in Luzon. It resulted in the practical occupation by the Chinese of the fertile fishing ground that used to provide livelihood to Filipino fishermen.

This incident, also within in the country’s EEZ, would prompt the Philippines to file its historic arbitration case against China. It’s a gambit that continues to split government officials and security observers. (READ: Aquino: This battle is not just about China and Justice Carpio: What is at stake in our case vs China)

China started driving away fishermen in Scarborough Shoal using water cannons, blocking resupply and rotation missions to Ayungin Shoal, and then reclaimed in 7 reefs turning them into artificial islands feared to become military outposts. Lately, it started challenging aircraft, too, prompting concerns that China is imposing an air defense zone in the region.

Randy takes comfort in knowing that none of them have been hurt in spite of the reports. Unlike the situation in Scarborough Shoal, the fishermen of Pag-asa island are not being harassed.

In this part of the South China Sea, Mayor Bito-onon said the fishermen coming from different countries peacefully co-exist although illegal fishing is a constant concern.

And while Chinese media had reported supposed plans to invade Pag-asa, Mayor Bito-onon dismissed it. “Hindi ako naniniwala na kukunin ng China kahit anong isla ng Pilipinas. Hindi ‘yun. Napaka-stupido naman ng China para kunin pa ang mga isla natin (I don’t believe that China will take the islands of the Philippines. It will be stupid for them to do that.),” Bito-onon said. 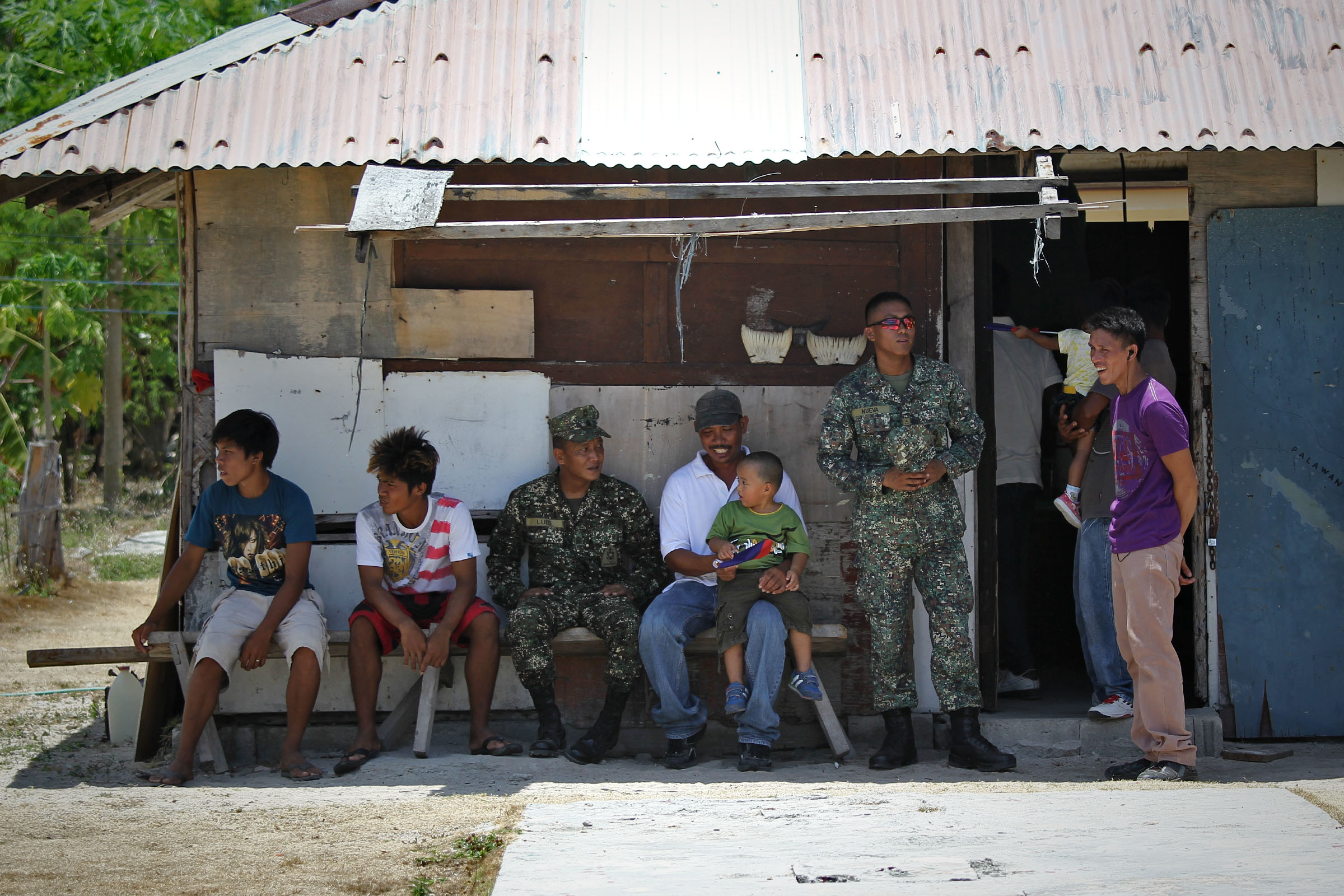 “I’m visiting this place to establish the fact that Pag-asa is a territory of the Republic of the Philippines,” Catapang told reporters during the visit that China protested as “futile and illegal.”

Public reaction to the Philippine military’s actions mirrors the split among government officials. There are those who call for a more aggressive response to China, especially in the social media, and there are those who feel military statements and photo releases relating to China’s reclamation activities are not helping.

The government has been too careful not to antagonize China any further while the arbitration case is pending. Malacañang has ordered the military to defer to the Department of Foreign Affairs (DFA) in issuing statements about the dispute. It has also stalled plans to, among others, repair the runway and construct a much-needed harbor in Pag-asa island. (READ: PH runway in Spratlys erodes as China reclaims to build own)

A military officer said they are avoiding a situation where the ramming incidents in Scarborough would be repeated in the Spratlys, where the military has several outposts that can only be reached by ships.

On the ground, the troops are not lacking in resolve but they can only do so much without the hardware. “Bilang isang sundalo, nandito po kami para ipagtanggol at bantayan po ang West Philippine Sea lalong lalo dito sa Pag-asa,” said Corporal Tychico Octobre of the Philippine Marines, who has been guarding the shores of Pag-asa in the last 5 months.

But they find it difficult to repel even illegal fishermen who do not hesitate to come near the island. The Philippine Coast Guard is also present here, but it has a few men and fewer boats. They work under the supervision of the Philippine Navy. 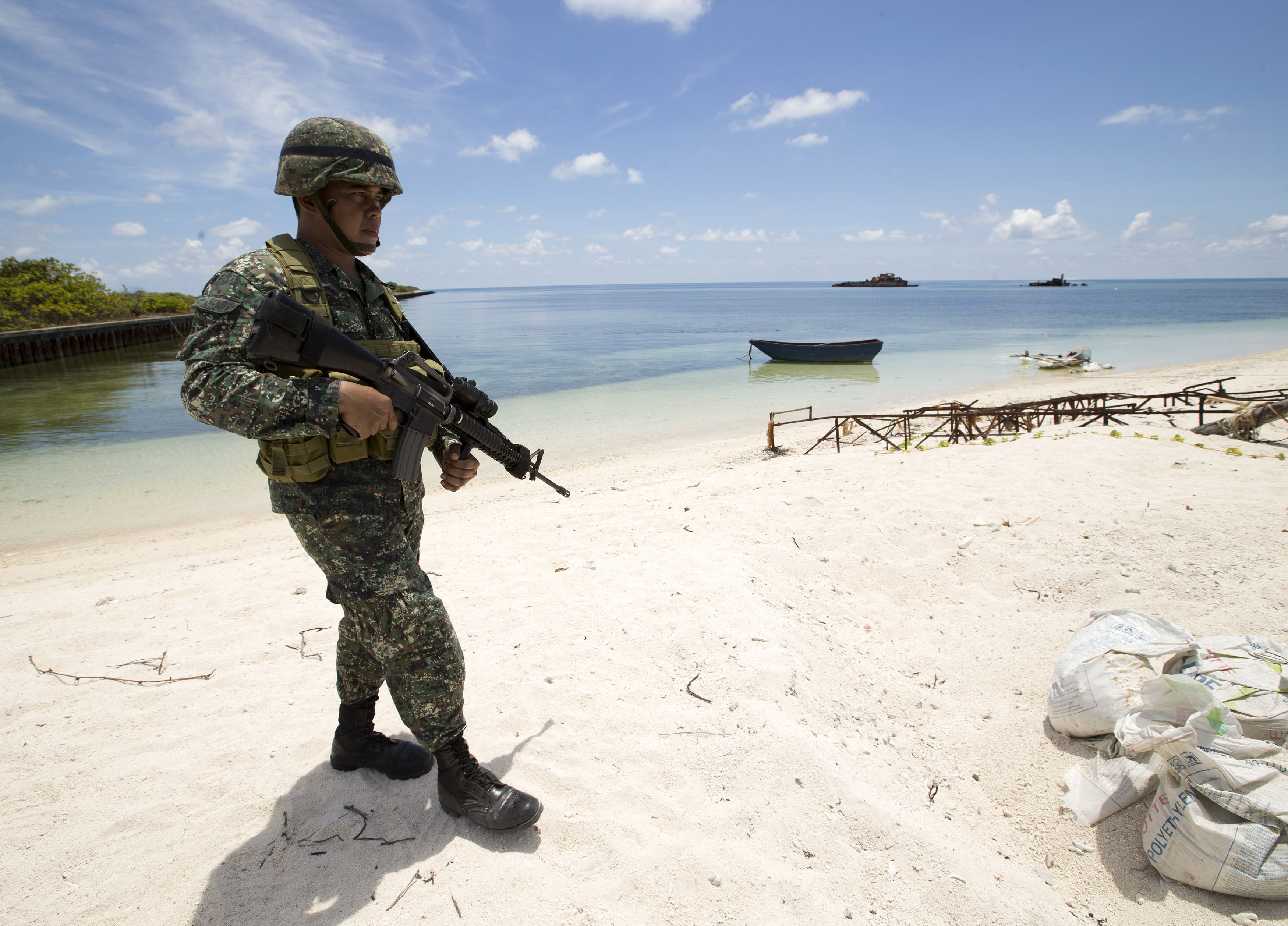 In spite of the worsening situation, Mayor Bito-onon is busy making the island accessible to tourists.

“We have long been promoting Pag-asa or Kalayaan to tourism but we’re only doing a backyard approach. We do not have that much money but we have a roadmap for developing tourism,” Bito-onon said in a joint press conference with Catapang here.

He is building a jump-off station in mainland Palawan, where tourists will ride a shuttle that will bring them to a small steel-hulled boat for a 26-hour trip to the island. Here, there will be a lodging house and a Pasalubong Center or a gift shop for souvenirs.

It’s an opportunity for tourists who are willing to wait even years to get booked for the rare trip. The steel-hulled boat that can accommodate 25 tourists at a time is now being built in Subic, costing the municipality about P10 million. Bito-onon said the first trip will bring in construction supplies.

He now has clients. Last month, a ham radio station was set up on the island, connecting it to a community of 85,000 adventurers in 120 countries. “In their community, Pag-asa or Kalayaan is No. 19 in their “rare-to-go” list.  Tourism is feasible for them because they want adventure,” Bito-onon said.

Bito-onon is eagerly awaiting a favorable ruling on the country’s arbitration case, which is expected next year. “I appreciate the arbitration case. It will settle [the disputes] permanently and legally. Doon na rin ako sumunod na kapag natapos ang arbitration case, paspasan na ang Pilipinas na mag-develop,” Bito-onon told Rappler (Once the case is settled, then we can fast-track the development here.) – Rappler.com