May 29, 2015 2:08 PM PHT
Rappler.com
Facebook Twitter Copy URL
Copied
'I join my colleagues in seeking further investigation by the Ombudsman of the matter and the consequent filing of the appropriate criminal complaint which in this instance appears to be plunder,' the senator says 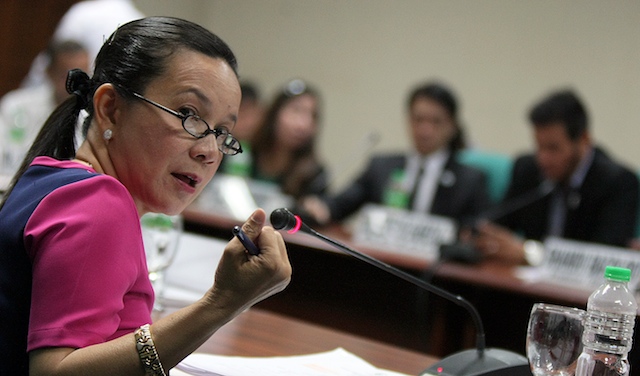 “As in the PDAF inquiry, I join my colleagues in seeking further investigation by the Ombudsman of the matter and the consequent filing of the appropriate criminal complaint which in this instance appears to be plunder,” Poe said in a statement.

She said after reading the subcommittee recommendation, she “found the same supported by documentary evidence as well as expert and personal testimonies that remain unrebutted by competent evidence to the contrary.”

Poe’s move further distances the neophyte senator from the Vice President, a family friend who supported the presidential bid of the late Fernando Poe Jr in 2004.

The senator had earlier thumbed down the possibility of a tandem with Binay, who remains the leading presidential contender despite being hounded by corruption allegations. (READ: Poe on tandem with Binay: ‘I don’t see it happening‘)

Pimentel and Poe are among the 4 senators who have signed the report as of May 28. The others are said to be Senate Majority Leader Alan Peter Cayetano and Senator Antonio Trillanes IV.

Pimentel had declined to divulge details of the report, in deference to  the Senate blue ribbon committee chairman, Senator Teofisto Guingona III.

A copy of the report seen by Rappler showed that father and son Binay should face plunder charges for signing documents as the agency heads for preliminary services for the parking building. The facility started construction during the term of the elder Binay, and was completed under the younger Binay’s watch.

The subcommittee also recommended the filing of plunder cases against members of Makati City Hall’s Bids and Awards Committee, resident auditors of the Commission on Audit, and the contractor, Hilmarc’s Construction Corporation.

A majority or 9 signatures of the 17-member committee is needed for the draft report to be endorsed as the official report of the panel. The nearly 50-page report is now being circulated for signatures.

The Binay camp expressed “sadness” over Poe’s decision to sign the report.

(Vice President Binay is saddened because it seems that Senator Grace Poe has sided with the senators who have persecuted him and his family, and have bullied innocent people.)

Quicho chided Poe for allegedly not even reading the affidavit submitted by Binay to the subcommittee, wherein the top official “clarifies matters and explains why the allegations against them are baseless.”

He said that the report “highlights the senators’ lack of respect for the rule of law,” since it was allegedly based on a “one-sided inquisition.”

The Vice President has never appeared before the Senate panel probing the corruption allegations against him, dismissing it as a “kangaroo court.” Mayor Binay attended the first hearing in August, but never returned since then as he accused the panel of following a “script” to discredit his family.

Binay and Poe have been neck and neck in latest surveys on voters’ preferences for president. Binay belongs to the opposition party United Nationalist Alliance; Poe is independent but ran as a guest candidate of the ruling Liberal Party (LP) in 2013. – Rappler.com