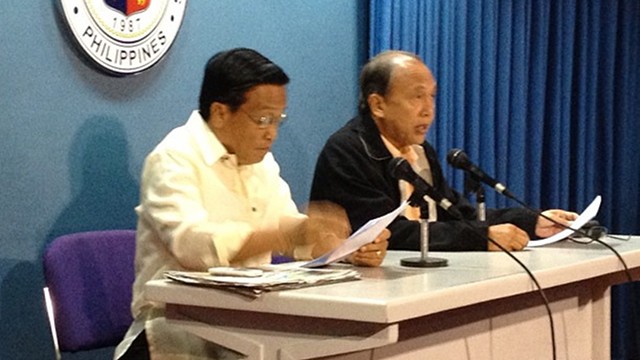 MANILA, Philippines – House Minority Leader and Quezon Rep Danilo Suarez and other members of the House minority bloc are withdrawing their support for the Reproductive Health bill (RH bill).

Suarez told reporters on Monday, July 30, up to 8 members of the minority will withdraw their support for the controversial bill.

The minority bloc’s move comes a week before the crucial August 7 scheduled House vote on whether or not to terminate the period of deliberations.

President Aquino endorsed “responsible parenthood” during his State of the Nation Address (SONA) last week. It remains to be seen if this will translate into votes next week.

Suarez said he had always been a hesitant co-author. He added his recent travels to developed countries convinced him that the coutry doesn’t need the RH bill.

Suarez said he originally supported it because he was alarmed by the growing number of unwanted pregnancies in the Philippines. “But in the course of my travels in developed nations, I was concerned. When you go around, you don’t see children. Bihira,” he said.

“My point is: Which is easier to handle? An overpopulation thriving in hunger, which can be addressed with good governance? Or a negative growth rate and convince your people to bear children?” he asked.

Early this year, the minority bloc was shaken by an internal dispute between Suarez and former minority leader Albay Rep Edcel Lagman, the strongest supporter of the RH bill.

Garin remains confident that supporters of the RH bill have the numbers in the House of Representatives. “Ako personally, sa tingin ko may numbers. Lalo na sa termination ng debate,” she said.

Garin said a number of solons who do not agree with the current version of the RH bill want to terminate the debate so they can amend the bill.