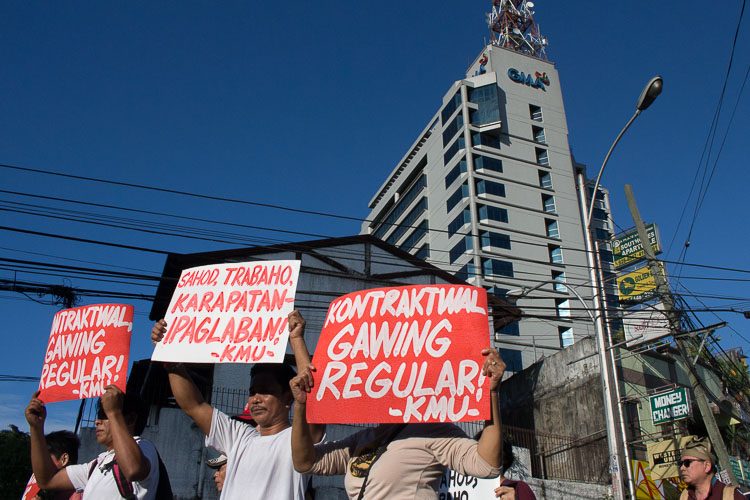 Facebook Twitter Copy URL
Copied
Long-time trade unionist Leody de Guzman explains that the protesting talents would greatly contribute to the 'anti-contractualization' campaign, as their 'intellectual skills' would help in terms of 'articulating the demand'

MANILA, Philippines – Members and supporters of the Talents Association of GMA (TAG) staged a protest on Friday, June 5, in front of network giant GMA-7’s main headquarters, urging an end to widespread contractualization not just in media but in various industries.

Talents are runners behind television programs but are considered independent contractors instead of regular employees despite their years of exclusive work with the network.

The talent system, which deprives workers of job security and other law-mandated benefits, is an industry-wide practice. Protesting groups allege it is meant for media corporations to maximize profit at the expense of its laborers, while GMA-7 insists on the talents’ employment status.

In 2014, two batches of regularization cases were filed before the National Labor Relations Commission (NLRC) against GMA-7. Both involved TAG members who risked their jobs suing the network over what they regard as labor injustice.

TAG President Christian Cabaluna believes the present exploitative system has lingered for so long that many media practitioners have accepted it as the norm, which he said, should not be the case.

Cabaluna stressed that his group is not against GMA-7 per se but against customary hiring arrangements that deny workers what is due them.

To date, some TAG members have yet to receive their salaries for one full pay cycle due to a new policy requiring acknowledgement receipts from them.

Long-time trade unionist Leody de Guzman explained that the protesting talents would greatly contribute to the anti-contractualization campaign, adding that their “intellectual skills” would help in terms of “articulating the demand.”

De Guzman, who heads the labor group Bukluran ng Manggagawang Pilipino, said the Philippine labor movement has been calling for a full stop of contractual labor for decades. He started as a labor leader 30 years ago.

Based on the results of a survey released by the Philippine Statistics Authority in May 2014, one in 3 workers in establishments with at least 20 employees are non-regulars. They represent 1.149 million of the 3.769 million establishment workers in the country.

Below are photos from the protest last Friday: