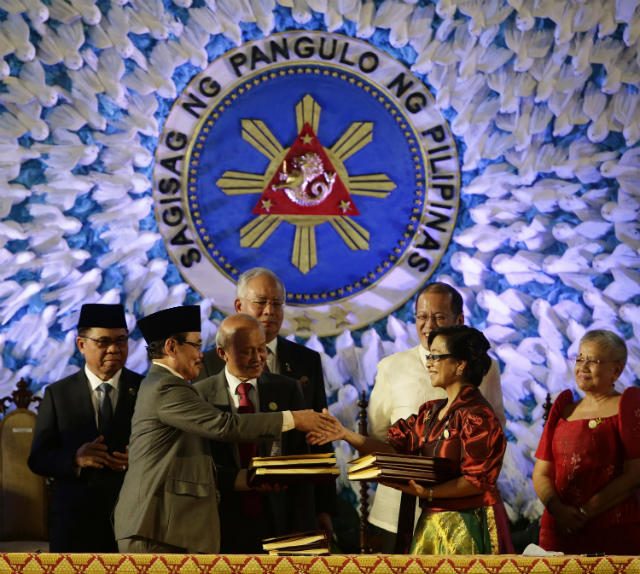 “The Petition seeks to avert the destruction of the Republic of the Philippines, the dismemberment of its territory, the fragmentation of its people, the despoliation of its natural and human resources, and the wreckage of its tripartite system of government,” the petition said.

The petitioners described the FAB, signed in 2012 by Leonen as government  panel chair, as “unconstitutional and treacherous”; and the CAB, the final peace agreement signed in 2014, as “equally void, flawed and polluted.”

“The ‘FAB’ and ‘CAB’ are the crafty and ingenious revival of the MOA-AD declared unconstitutional, littered with greater and more vicious incursions into the Constitution, the laws and jurisprudence deceptively wrapped in sophistic and stylish language to obfuscate the odious radiations,” the petition said.

In 2008, the High Court declared as unconstitutional the Memorandum of Agreement on Ancestral Domain (MOA AD), which was nearly signed during the Arroyo administration but scrapped in the face of a public backlash.

The Aquino administration had defended the FAB and the CAB from comparisons with MOA AD, saying they took time to seal to remove any legal questions.

The petitioners said that contrary to the Ramos administration’s Executive Order 125, which mapped out the approach and administrative structure of peace efforts with rebels, government negotiators were not assisted by a panel of advisers designated by the president.

This, they believed, “inflicted a mortal flaw upon the peace process” and rendered it “legally infirm.”

“The FAB and CAB as the products of the vicious process are necessarily flawed.  No poisonous tree can bear edible fruit,” they said. The proposed Bangsamoro law is the “fruit” of the two agreements.

The petitioners alleged that FAB and CAB violated Article X, Section 1 of the  Constitution, which authorized and recognized only 5 territorial and political subdivisions namely provinces, cities, municipalities, barangays and autonomous regions.

They also said the power to create the Autonomous Region in Muslim Mindanao was vested only in the First Congress under the 1987 Constitution and as such, “without the prior constitutional amendments” the FAB proposal to establish the Bangsamoro to replace the ARMM “is unconstitutional and void.”

The petitioners asked the court to issue a TRO to stop the Department of Budget and Management to release funds for in relation to the implementation of the two agreements, and to return the balance of unspent funds to the National Treasurer.

The petitioners asked the Court to issue a mandamus directing  the COA to disallow the audit of all funds incurred by the government panel.

Malacañang questioned the timing of the petition.

“Well one, the timing is quite odd….We signed the FAB close to two years ago and then the CAB a year ago. And so from there, there’s no opposition when both documents were signed,” Valte said in a press briefing.

Senator Miriam Defensor Santiago, a constitutional expert, was among those who raised legal questions against the CAB shortly after it was signed in 2014, saying it would lead to the creation of a “substate.”

Valte says the government is prepared to respond to the petition, if asked by the Court. – with a report from Camille Elemia/Rappler.com