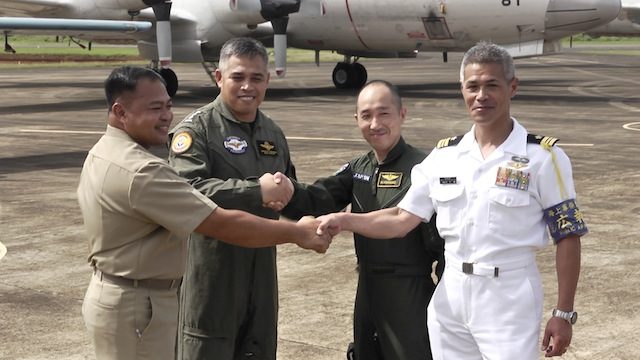 A small group of 21 officers fom the Japan Maritime Self-Defense Force (JMSDF) and 15 officers from the Philippine Navy (PN) simulated on Tuesday, June 23, a joint search and rescue operation off the coast of Palawan, the Philippine island closest to the disputed area.

It marked the first time for the former World War II enemies to fly together.

Responding to questions, Philippine Navy spokesperson Colonel Edgar Arevalo cited the Memorandum on Defense Cooperation and Exchanges (MDCE), an executive agreement signed only in January by Japan’s Minister of Defense and the Philippines’ Secretary of Defense.

“Paragraph 1 [of the agreement] provides for a framework of cooperation and exchanges between the participants in the field of defense on the basis of reciprocity and mutual benefit,” Arevalo told Rappler when asked for the legal basis of the training exercise.

During his state visit to Japan in early June, Philippine President Benigno Aquino III announced that the two countries have agreed to start talks on a VFA that will allow Japan’s access to Philippine military bases at a time when both countries are fighting China’s aggression in the South China Sea.

Japan has territorial disputes with China over Senkaku Islands in the East China Sea, while the Philippines is protesting China’s virtual occupation of shoals and construction of artificial islands in the West Philippine Sea.

The Philippines already has two VFAs, with the United States and Australia, that allow regular bilateral and multilateral training exercises. (WATCH: Biggest PH-US war games a display of what ‘bullies’ may face) He took a different track from the Enhanced Defense Cooperation Agreement (EDCA) with the US, which Malacañang insists is only an executive agreement that doesn’t require Senate ratification. (READ: A year later, SC still sitting on EDCA)

EDCA seeks to increase US military presence in the Philippines by allowing it to construct facilities and preposition assets inside Philippine military bases, which critics call “de-facto basing.” It is pending before the Supreme Court.

“With respect to the JMSDF, it is not in the training in the magnitude and duration as that of the USA pursuant with the VFA,” he said.

“This is an opportune time for us to learn so that in the event that other countries may need our help, the standards are all there and we can communicate, we can fly, we can learn, we can work with other nations without any challenges at all,” said Colonel Jonas Lumawag, Philippine Naval Air Group commander who led the Philippine team in the exercise.

JMSDF Commander Hiromi Hamano said they also got to familiarize themselves with the airport in Puerto Princesa, which happens to be one of the sites offered to the US under the EDCA.

The P3-C Orion is a US-made anti-submarine, anti-surface warfare, surveillance, and reconnaissance aircraft capable of conducting up to 10-hour long range patrols. The Philippine Navy is only capable of up to 5-hour patrols. – Rappler.com