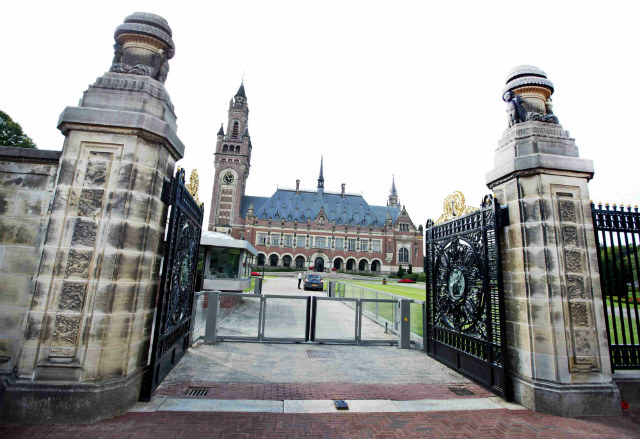 This is China’s toughest claim: The arbitral tribunal at The Hague, The Netherlands, has no right to hear the Philippines’ case.

With a powerhouse team led by internationally renowned lawyer Paul Reichler, the Philippines said it is ready to prove China wrong. (READ: Philippines in full force on 1st day at The Hague)

Philippine Solicitor General Florin Hilbay along with Reichler will present the Philippines’ position.

Joining them is a high-level contingent from all 3 branches of Philippine government:

“If the tribunal decides that it has jurisdiction over the case, the Philippines will be asked at a future date to present its oral arguments on the merits of the case,” the Philippine Department of Foreign Affairs explained on July 3.

When it comes to the merits of the case, the Philippines wants the tribunal to declare China’s 9-dash line illegal. (READ: PH vs China at The Hague: ‘80% of fish’ at stake)

He pointed out that “99.9% of legal scholars outside of China think that way.”

Philippines’ case ‘about sea, not land’

China’s core argument stems from the nature of the Philippines’ case.

In a position paper released on December 7, 2014, China said the basic issue is about who owns the disputed islands in the South China Sea.

China believes the issue is primarily about land, not the sea.

This means the case is beyond the scope of the UN Convention on the Law of the Sea (UNCLOS), the so-called Constitution for the Oceans.

The Philippines, on the other hand, uses UNCLOS as the basis for its case against China before the Permanent Court of Arbitration at The Hague.

Citing UNCLOS, Manila asserts that its case is about who has the right to fish, among other things, in the disputed South China Sea.

For the Philippines, the case is basically maritime and not territorial in nature. (READ: What’s at stake in our case against China)

The Philippines says China, instead of insisting on its 9-dash line, should follow UNCLOS.

Under UNCLOS, a huge part of the South China Sea falls under the Philippines’ exclusive economic zone (EEZ). The EEZ is an area 200 nautical miles from a coastal state’s baselines or edges, within which it has the exclusive right to fish, among other things.

‘Round one victory’ sought

Quoted by Vera Files, former solicitor general Jardeleza said, “We are very confident that we can convince the court that this is not about ownership of land.”

Now a Philippine Supreme Court associate justice, Jardeleza added that the Philippines, for instance, “is not asking the court to say who owns Panatag Shoal,” a contested portion of the South China Sea.

He said the Philippines, instead, is arguing that Panatag or Scarborough is “within our EEZ, and therefore under the rules of UNCLOS, we have exclusive rights to fish within that area.”

Philippine Justice Secretary De Lima, for her part, told the Inquirer, “I go to The Hague with my head held high, knowing that ours is a principled position based on the rule of international law and upholding of national sovereignty and dignity as a nation.”

Referring to a positive ruling on jurisdiction, De Lima added, “A round one victory will be sweet enough and will be a positive sign for the Philippines’ cause.”

The Philippines is extra confident about its case because of the powerhouse team representing the country.

Reichler is a partner at the 7-decade-old firm FoleyHoag in the United States. He serves as co-chair of its International Litigation and Arbitration Department.

Chambers Global said Reichler “belongs to a select group of elite lawyers with extensive experience litigating on behalf of sovereign states before the International Court of Justice in The Hague, and the International Tribunal on the Law of the Sea in Hamburg.”

Carpio, who has extensively studied and lectured about the South China Sea, banks on the UNCLOS tribunal as “the only forum where we can beat China.”

“In the UNCLOS tribunal, warships, warplanes, atomic bombs don’t count. They just decide the case based on the law of the sea,” Carpio told Rappler.