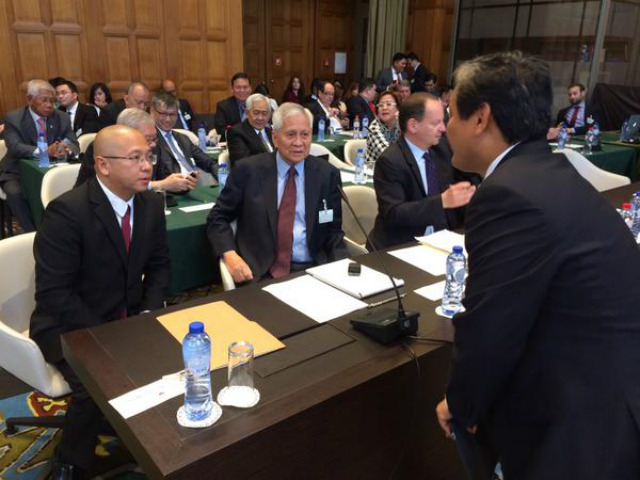 MANILA, Philippines – The Philippines said China has “irreversibly damaged” the environment as the Southeast Asian country tried to convince an arbitral tribunal at The Hague, Netherlands, that it has the right to hear the Philippines’ case.

In a bulletin Thursday, July 8, Deputy Presidential Spokesperson Abigail Valte added that the Philippines’ advocates – Lawrence Martin, Bernard Oxman, and Paul Reichler – argued “why the Philippines’ claims fall squarely within the jurisdiction of the tribunal.”

Under the United Nations Convention on the Law of the Sea (UNCLOS), only the Philippines has the right to fish within its EEZ.

Del Rosario said that “China has irreversibly damaged the regional marine environment, in breach of UNCLOS, by its destruction of coral reefs in the South China Sea, including areas within the Philippines’ EEZ, by its destructive and hazardous fishing practices, and by its harvesting of endangered species.”

It wasn’t part of the Philippines’ arguments when it filed its case against China in January 2013.

A powerhouse Philippine team is in The Hague from Tuesday until Monday next week, July 13, for oral hearings in its case against China. The issue at stake is whether the tribunal has the right to hear the Philippines’ case. (READ: Philippines vows to smash China’s strongest argument)

In his speech on Tuesday, Del Rosario also cautioned the tribunal that China’s expansive claim over disputed waters threatens the law of the sea, and endangers small countries like the Philippines. (READ: FULL TEXT: The Philippines’ opening salvo at The Hague)

The Philippines argues that the 9-dash line is illegal under UNCLOS. Instead, what UNCLOS allows is a 200-nautical mile EEZ. (READ: PH vs China at The Hague: ‘80% of fish’ at stake)

Del Rosario said: “In fact, China has done much more, Mr President, than to simply claim these alleged ‘historic rights.’ It has acted forcefully to assert them, by exploiting the living and non-living resources in the areas beyond the UNCLOS limits.”

China, for instance, has buried 311 hectares of coral reefs through its island building activities, according to the Philippines.

At the same time, China has “forcibly” prevented other coastal states, including the Philippines, “from exploiting the resources in the same areas.”

Filipino fishermen, for one, have complained that China is blocking them from fishing in the South China Sea.

Del Rosario said: “Subsequent events, including China’s acceleration of massive land reclamation activities, which it has undertaken – and continues to undertake – in blatant disregard of the Philippines rights’ in its EEZ and continental shelf, and at tremendous cost to the marine environment in violation of UNCLOS – only serve to reconfirm the need for judicial intervention.” – Rappler.com