House leader: Everyone is suffering, Duque is not special 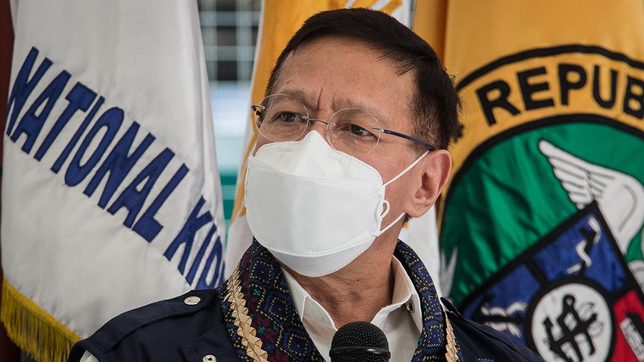 HEALTH CHIEF. Secretary Francisco Duque lll at the NKTI compound in Quezon City on Wednesday, May 5, 2021.

While he said he sympathized with the frustrated Department of Health (DOH) Secretary Francisco Duque III, House public accounts panel chairman and PROBINSYANO AKO Representative Bonito Singson said he is not special and must still answer questions posed by the Commission on Audit (COA) and the public.

“While we sympathize with him, lahat po tayo nakakaranas ng  paghihirap (all of us are facing hardships) in one way or another during these times and it does not make his (Duque’s) situation unique,” Singson said in a Rappler Talk interview on Thursday, August 19.

He added: “So while we sympathize with him, we still need to look into it. It will not, in any way, affect our objective, which is for us to be enlightened on the manner in which these funds were used.”

Singson was replying to Rappler’s question about what he thinks of Duque’s emotional monologue during the public accounts panel’s probe on Tuesday, August 17.

To recall, Duque got emotional as he hit the COA for supposedly destroying the reputation of the DOH with its findings of misused and unused P67 billion worth of funds intended for the pandemic response – findings that have sparked public outrage against the DOH and the Duterte government.

Duque said he had been sleepless for nights because of COA and he believes they were not given enough time to reply.

During the probe, COA clarified it gave DOH enough time and was only following its mandate of releasing audit reports. Singson sees his probe as a way to find irregularities and to give the DOH the opportunity to present its side of the story.

“It will not in any way affect our objective, which is for us to be enlightened on the manner in which these funds were used. That is the mandate of Congress, of the whole government. We need to shed light on this for our people,” Singson said.

“If not, their doubts will only grow, if we do not scrutinize this,” he added.

Singson also commented on police chief General Guillermo Eleazar’s call not to publicize COA’s reports to the media, simply explaining that the COA is mandated by law to release them and that the law guarantees journalists and the public access to these documents.

“When the media writes about these, it is good so that all of us can see,” Singson said.

Singson said he plans on focusing on the breakdown of the P67 billion worth of funds given to the DOH in his committee’s next hearings. The next one was scheduled for the morning of Friday, August 20.

Duque calls for emergency use applications for molnupiravir