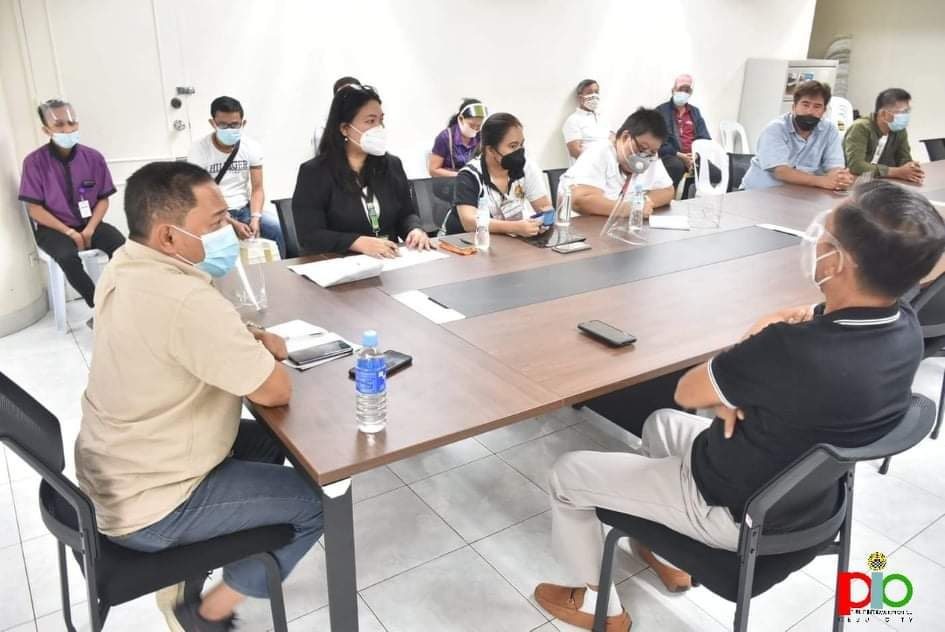 PREPARATIONS. Councilor Dave Tumulak meets with funeral parlor operators and the Cadaver Section of the Cebu City Health Department and other city government offices to discuss the shortage of burial sites in the city, on August 10, 2021

Should the number of COVID-19 cases continue to surge, the Cebu City government is considering mass burials to trim the long queues of dead bodies for cremation in funeral parlors.

According to data from the Emergency Operations Center, Cebu City has had an average of 11 deaths per day for a total of 62 deaths so far in August. Prior to the latest surge, the city had a relatively low number of COVID-19 deaths.

The latest data from the Department of Health (DOH) Central Visayas office showed that almost all COVID-19 wards in Cebu City are fully occupied. The city’s vaccine drive has so far covered only 9% of the 700,000 eligible residents.

“That is something that is bound to happen. If the mortality that we are experiencing on a daily basis in-ana…mahitabo na ((remains to be like that…it is bound to happen),” City Councilor Joel Garganera, the head of the Emergency Operations Center, told media during a press briefer on Monday, August 9.

Garganera said the city government is eyeing a lot in Barangay Adlaon as a possible mass burial site.

(We’re looking at that possibility. But if we could provide them with the necessary individual lots, which is what we are looking at in Babag, by all means that is better. But, if we cannot contain this, and our refrigerators become full, we cannot allow this to be the start of yet another pandemic.)

Councilor Dave Tumulak called a meeting with funeral parlor operators, officials of the Cadaver Section of the Cebu City Health Department, as well as other city government offices to discuss the shortage of burial sites in the city on Tuesday, August 10.

Garganera said the city government is also looking at an existing cemetery in Barangay Babag, one of its mountain barangays, to add to the number of burial lots available in the city.

Right now, he said there are at least 170 lots available in the city’s cemeteries.

The city government is coordinating with the Office of the Presidential Assistant for the Visayas for the procurement of refrigerated vans to augment its storage capacity.

(As it is right now, our hospitals are full. And they don’t have the capability to store more. In spite of the fact that they have also procured  more refrigerators, considering the number of mortalities, they will have a hard time.)

After over half a year of modified general community quarantine, stricter restrictions were imposed on the city following the detection of the Delta variant.

While local government officials earlier said that the long lines outside hospitals were due to “staffing shortages” and not due to hospitals being fully occupied, data released by DOH Central Visayas showed that almost all COVID-19 wards in Cebu City were fully occupied. During the cases surge in from December 2020 to March 2021, the city never had bed occupancy rates above the 60% danger zone due to an abundance of space in the hotel quarantine facilities and public barangay isolation centers.

Many of these facilities were closed or downsized prior to the current surge, which may be linked to the more transmissible Delta variant, although local health officials have not yet categorically said so.

The vaccine rollout has also been painstakingly slow in Cebu City. As of Tuesday, August 10, over 66,000 individuals – or 9% of the 700,000 eligible residents – have been fully vaccinated against COVID-19 since the rollout began in March.

Cebu City was named a priority area in the national government’s vaccine rollout plan but its vaccination rate is low compared to other regions.  In the 17 cities and municipalities in Metro Manila, the percentage of fully vaccinated residents ranges from 23.6% to 69.3%, far higher than the rest of the country.

Cebu City reported 269 new cases on Thursday, August 10. The city currently has 3,656 active cases, the highest number of active cases  it has had at any time so far this year.