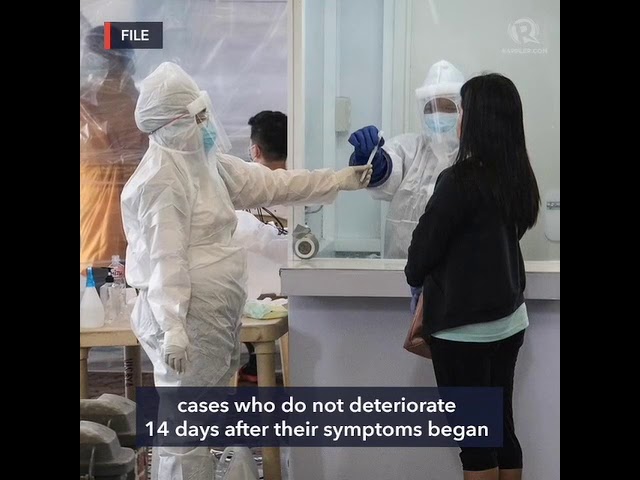 This is according to Resolution No. 60 of the Inter-agency Task Force on Emerging Infectious Diseases (IATF-EID) posted on the Official Gazette, which was also confirmed by the Department of Health’s (DOH) daily bulletin.

These new numbers bring the total confirmed cases to 89,374, according to the DOH’s daily bulletin posted on Thursday evening.

Metro Manila is again the top source of new cases. The breakdown of new cases based on location is as follows:

The country also reported a record-high number of new recoveries, 38,089. This led to a steep rise of total recoveries to 65,078 on Thursday.

Meanwhile, the death toll rose to 1,983 after the addition of 23 new fatalities.

Sharp increase due to ‘reconciliation’ of data

The DOH said these sharp increases in both confirmed cases and recoveries is due to “enhanced data reconciliation efforts” between the national government and local governments.

In early July, the DOH created the COVID-19 Surveillance and Quick Action Unit which validates and reconciles local and national data through the DOH’s CovidKaya platform.

“These massive data reconciliation efforts have resulted in faster and more accurate tagging of health statues – particularly on deaths and recoveries,” said the DOH.

For recoveries, the DOH retagged as “recovered” those mild and asymptomatic cases who do not deteriorate 14 days after their symptoms began or their swab samples collected.

On July 15, The government’s data team retagged as recovered certain mild and asymptomatic cases, with endorsement from regional offices, which led to 5,000 recoveries being added to the tally.

Reconciliations of data on recoveries will be reported every 15 days, said the DOH.

The record-high rise in coronavirus cases was reported hours before President Rodrigo Duterte was to decide on what quarantine classifications to impose on different parts of the country from August 1 to 15.

Presidential Spokesman Harry Roque previously said Metro Manila, the country’s COVID-19 epicenter, could revert to lockdown if the spread of infections continues as it had the past week where a thousand to 2,000 new cases were reported almost daily.

But earlier on Thursday, asked if Metro Manila would revert to modified enhanced community quarantine (MECQ) now that confirmed cases in the country soared past 85,000, Roque said: “Well, yes and no. I will not preempt the President. But like I said, it will not be business as usual.”

He also said the views of Inter-agency Task Force on Emerging Infectious Diseases (IATF-EID) was similar to that of Senator Sonny Angara’s, that a return to MECQ for Metro Manila would be disastrous for the economy.

Mayors, prominent businessmen, and several top government officials have expressed support for a new system of “localized lockdowns” – rather than impose stricter quarantine measures over an entire city or province, local governments would declare lockdowns in specific areas or barangays.

In a bid to save businesses and jobs, the national task force has been reclassifying businesses to allow them to operate in GCQ areas like Metro Manila.

The megacity, source of most of the new infections, has been on GCQ since June 1. Its GCQ status was extended thrice despite a steady rise in cases there.

But Duterte’s economic team, led by Finance Secretary Carlos Dominguez III, wants Metro Manila and nearby Calabarzon to transition to MGCQ as soon as possible. He said 67% of the country’s economy is based on the economies of these two regions. – Rappler.com