At least 9 dead in ‘worst flooding’ in Cagayan – governor 'WORST FLOODING'. Residents of Barangay Iraga in Solana, Cagayan,on November 14, 2020, the morning after they spent the night on their roof after massive flooding inundated their home.

Facebook Twitter Copy URL
Copied
(6TH UPDATE) Cagayan is now under a state of calamity. Thousands of people have been displaced by massive flooding and are in need of help.

At least 9 people are dead in Cagayan as it suffered its “worst flooding” in decades due to heavy rains brought by Typhoon Ulysses and the tail-end of the cold front.

Cagayan Governor Manuel Mamba said in an early morning interview on DZBB on Saturday, November 14, that one rescuer was electrocuted on Friday night, November 13, raising the provincial death toll to 9.

“This is the worst flooding to hit the province,” Mamba said in a mix of Filipino and English.

Local officials said the last time the province experienced flooding of such magnitude was 40 years ago.

Mamba said Cagayan experiences flooding every year but the extent of the current flooding is “unusual.”

The governor noted that the province is the catch basin of rain water from Cagayan Valley and the Cordillera Administrative Region.

Illegal logging has also denuded Cagayan’s forests for the past 5 decades, which the governor reiterated in the interview.

Thousands of people have been displaced as floodwaters reached roof level in parts of the province. 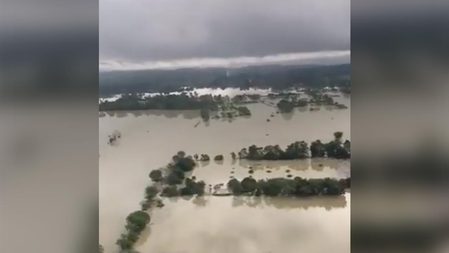 Continuous heavy rains prompted Magat Dam to open 5 gates to release water. The excess water flows to the Cagayan River and its tributaries, leading to flooding in communities. As of early Saturday morning, 3 gates remained open.

As tropical cyclones came one after another in the past month, the soil in many parts of Luzon is already saturated as well, with limited capacity to absorb rainfall.

The Sangguniang Bayan on Saturday approved the recommendation of Mamba, who chairs the Provincial Disaster Risk Reduction and Management Office, to declare a state of calamity in the province.

Those who wish to donate relief goods may bring them to the Cagayan provincial capitol, Mamba said.

Many families had to spend the night on their roofs after floodwaters inundated their homes. The national highway and other major roads are impassable, limiting rescue operations.

Rescue operations were hampered on Friday night by the strong current, complicated by debris floating on the floodwaters, as well as power lines.

Provincial Administrator Darwin Sacramed said in an interview livestreamed on the Facebook page of the Cagayan Provincial Information Office (CPIO) on Saturday morning that Cagayan has experienced “continuous flooding” over the last two weeks.

He said that the provincial government has conducted preemptive evacuation as early as 4 days ago and reiterated it on Friday, but there were still those who opted to stay in their homes as they did not anticipate the massive flooding.

The local official said 90% of the population of Tuguegarao is affected by the flooding.

This was the situation in Tuguegarao City as of Friday, November 13.

“The effect is so vast and we lack manpower and equipment,” Sacramed said in a mix of English and Filipino, adding that the provincial government has been working round the clock with what it has.

Sacramed said rescue efforts will be concentrated in the Linao area in Tuguegarao, and that operations in the city have been divided into clusters – north, east, south, and west of the city. Other flooded municipalities will get help too, he said.

Sacramed said that two helicopters will augment the rescue operations that morning, and that 1,200 relief packs have been prepositioned for distribution.

Power in some Cagayan towns had been restored as of Saturday morning.

The Cagayan PIO said that some barangays in Tuguegarao City have electricity already, but the governor has requested the National Grid Corporation of the Philippines to temporarily cut power to avoid incidents of electrocution. Of the 9 deaths in the province during the flooding, 3 died of electrocution.

As of Saturday, aside from Tuguegarao City, 26 towns are affected by the flooding.

Mamba has asked the National  Irrigation Administration to close all the gates of Magat Dam for the floodwaters to subside. As of 6  am,  Magat Dam has 3 gates opened with at least 6 meters total gate opening. Meanwhile, Buntun Bridge is still at the critical level of 12.8 meters.

The Cagayan PIO said that at least 11,392 families or 37,327 individuals are staying in evacuation centers.  As of 9 am on November 14, the flooding has affected at least 174,940 individuals in 26 municipalities in Cagayan. More than 11,000 families have been evacuated.