MANILA, Philippines – The Department of Justice (DOJ) has charged at least 16 people, including nuns, linked with the Rural Missionaries of the Philippines (RMP) for the non-bailable offense of allegedly providing funds to the Communist Party of the Philippines-New Peoples’ Army (CPP-NPA). 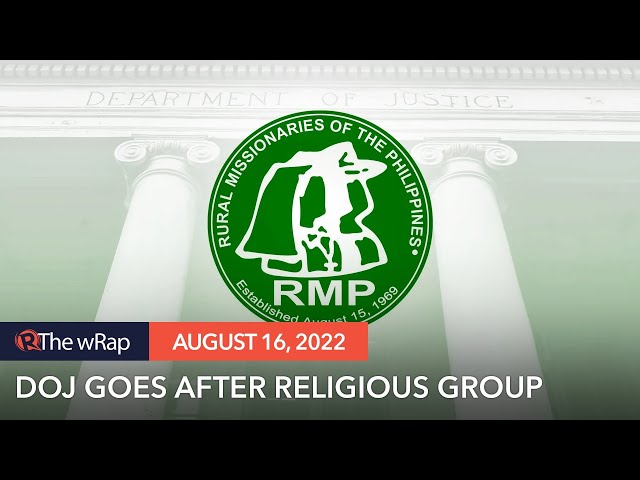 The 16 people were charged under Section 8(ii) of Republic Act 10168 or the anti-terrorism financing act which penalizes individuals found to have made “available any property or funds, or financial services or other related services” to an individual or group designated as a terrorist by the government.

No bail was recommended, lawyer Mico Clavano of the Office of the Justice Secretary said.

The charges were filed Monday, August 15, before the Iligan City Regional Trial Court, he added.

Reporters pressed for a copy of the resolution, citing the seriousness of the charge, Clavano cited privacy as reason for withholding the document.

The next step would be for the trial court judge to determine if there is basis to issue a warrant of arrest. If an arrest warrant is issued, the defendants would be jailed for an indefinite period.

In a press release on Monday, the DOJ alleged that the RMP wired a portion of money it received from foreign funders to the CPP-NPA, based on a probe by the Anti-Money Laundering Council (AMLC) and testimonies of people who claimed to be former communist insurgents.

RMP has not been designated as a terrorist group by any court in the country nor by using the contested power of the Anti-Terrorism Council under the Anti-Terror Law.

The CPP-NPA, however, was tagged as one by council in December 2020. The AMLC first froze three of RMP’s bank accounts in December 2019 based on testimonies of two people who claim to be former rebels linking the religious group to the communist insurgency.

RMP, however, has consistently denied being a communist front organization and condemned the Duterte government’s hostile crackdown on progressives and dissent.

The Union of Peoples’ Lawyers in Mindanao (UPLM), a group that has closely worked with RMP, said the DOJ’s latest move was “obviously aimed at suppressing and harassing human rights defenders.”

In a statement on Tuesday, August 16, the group also defended one of its member-lawyers named as a respondent in the terror financing charge, saying that she has helped the Northern Mindanao Region chapter of RMP in providing legal assistance to Lumad communities.

“The projects of the RMP-NMR went through the rigorous processes of selection, monitoring, and auditing by its respective donors, such as the European Union, the United Nations, and many others,” the group said.

“To indict these individuals merely on the basis of unvetted or still to be clarified statements, without strong documentary or object proof, is to act on rumors,” UPLM added.

DOJ’s move is the latest in a series of challenges faced by RMP, a non-profit organization run primarily by nuns and other lay people that is involved in grassroot works with rural poor communities.

The group marked its 53rd founding anniversary exactly on the day the charges were filed by the DOJ.

In June 2022, then National Security adviser Hermogenes Esperon Jr. ordered the National Telecommunications Office to block RMP’s website, together with at least 20 other groups the government alleged to be “affiliated to and are supporting these terrorists and terrorist organizations.”

– With reports from Lian Buan/Rappler.com