STORM-BATTERED. Five days after Typhoon Ulysses hit Metro Manila and nearby provinces, residents of Kasiglahan Village in Barangay San Jose, Rodriguez, Rizal continue to salvage whatever was left from their houses.

The Philippines, among countries deemed most vulnerable to climate change, is planning to reduce its commitment in lowering carbon emissions under the historic Paris climate change agreement.

A draft text of its first Nationally Determined Contributions (NDC) shows the country aiming to reduce carbon emissions by only 30% by 2040, a target lower than the one it gave in 2015 and for a longer period of time.

In the 2015 Intended Nationally Determined Contributions (INDC) submitted by the Philippines, it aimed to reduce emissions by 70% by 2030 compared to its business-as-usual (BAU) scenario. This entire reduction target would be conditional on aid and resources made available to the Philippines, partly through international assistance.

But a draft of the country’s first NDC, shown to civil society groups last December 23, shows that the Philippines now wants to reduce by only 30% by 2040. Of this percentage, a 20% reduction would be conditional on foreign aid while 2% would be “unconditional” reduction.

“The Philippines commits to a projected GHG (greenhouse gas) emission reduction and avoidance of 30% by 2040 from its business-as-usual scenario for the agriculture, waste, industry, transport, forestry, and energy sectors,” reads the draft text prepared by the Climate Change Comission (CCC).

The CCC, whose officials represent the country in annual international climate change conferences, said the proposed commitment includes a projected net greenhouse gas emission reduction of 185.5
MtCO2e (million metric tons of carbon dioxide equivalent) which can be done with the country’s own resources.

CCC Vice Chairperson Emmanuel de Guzman said the draft NDC would have the country commit to peaking greenhouse gas emissions by 2030 or 10 years from now.

“We express our extreme concern, disappointment, and collective scorn with the latest draft NDC text, as it does not indicate sufficiently high ambition for the Philippines’ climate change mitigation and adaptation strategies,” reads a joint statement signed by 6 groups.

They said lowering the emissions reduction target to 30%, compared to the initial 70% ” will embarrass the country before the international community.”

The climate advocates also slammed the proposed goal to set 2030 as the country’s peaking year for greenhouse gas emissions.

They said the country should peak “way before 2030” and make this more than an aspirational target.

The groups called on the Philippine government to set specific targets to reducing the country’s dependence on fossil fuel, the use of which is responsible for a big chunk of carbon emissions globally.

They suggested setting 2030 and 2050 as peaking years for the production and consumption of fossil fuels in the country. Coal, they said, should have a much earlier peaking year than other fossil fuels.

“Measures that must be prioritized include the phasing out of coal-fired power plants starting from 2021, scaling up indigenous renewable energy development, and improving energy efficiency, preventing the construction of nuclear power plants, and preserving natural carbon sinks,” proposed the groups.

Meanwhile, De Guzman had said during the December 23 consultation that the draft NDC “advances our national interest” and supports the “national development objectives of sustainable industrial development, poverty eradication, energy security and social and climate justice.”

The CCC aims to submit the country’s first NDC before the end of 2020 or on December 31.

This means the Philippines will have submitted its first NDC more than 5 years after submitting its intended NDC on October 1, 2015 and 3 years after the country ratified it.

No less than President Rodrigo Duterte wanted the previously lauded 70% carbon emission reduction target, saying it was unfair for the Philippines to commit so much when it is not a major contributor to greenhouse gas emissions.

In 2017, former CCC vice chairperson Vernice Victorio had told Rappler that Duterte only agreed to sign the Paris climate deal in 2016 after he was told the 2015 initial commitment could be lowered.

In the Paris climate change agreement, almost 200 countries committed to take steps to keep global warming to “well below” 2 degrees Celsius over pre-Industrial Revolution levels. and to strive for a limit of 1.5 degrees Celsius. 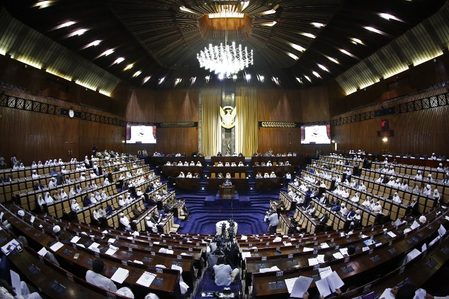 It’s the developed nations that carry the greatest share of the burden since they polluted for longer and are responsible for most of the emissions that have caused the planet to warm.

Last November, as one of 2020’s most devastating storms battered parts of Luzon, Duterte called on rich nations to drastically reduce their emissions.

Developing nations like the Philippines, which still use coal and oil to grow their economies, are encouraged to “continue enhancing” their efforts and “move over time” towards absolute cuts.

The agreement allows countries to revise their contributions every 5 years. It asked countries to update their pledges by 2020. – Rappler.com