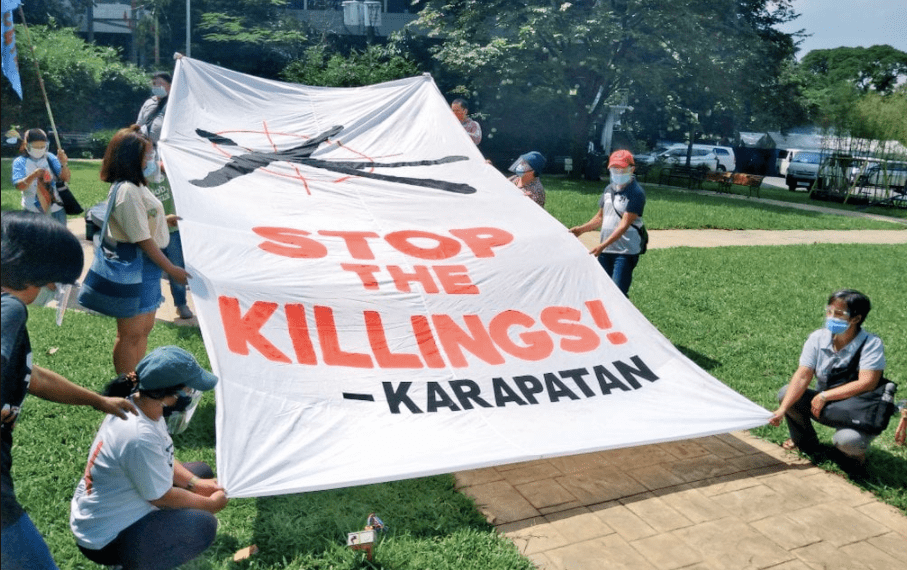 Facebook Twitter Copy URL
Copied
The proposed resolution falls short of launching an independent investigation, which human rights groups have been calling for

A proposed resolution before the United Nations Human Rights Council (UNHRC) is expected to tackle an offer of technical assistance to the Philippines amid worsening abuses under President Rodrigo Duterte.

It falls short of launching an independent investigation, which many human rights groups have been lobbying for to at least end the worsening culture of impunity in the Philippines. (READ: More killings feared if UN Human Rights Council fails to act vs impunity in PH)

The proposed resolution was tabled before the council by member-states Philippines, India, and Nepal. Joining them are UNHRC non-members Hungary, Iceland, Norway, Thailand, and Turkey.

It wants the UNHRC to recognize “the cooperation” between the government and the UN, and takes note the Duterte administration’s “efforts to further broaden positive engagement.”

It also urges UN member-states, agencies, and other stakeholders to encourage and support technical cooperation between the Philippine government and the office of UN rights chief Michelle Bachelet “with a view to improving the situation of human rights in the country in response to the Government’s requests for technical assistance and capacity-building.”

It also “encourages” the Philippines to “address the issues raised in the report and other remaining challenges in relation to the situation of human rights.”

Bachelet in June 2020 released a report which stated that local systems have so far failed to exact accountability for the killings. Said report was requested by the UNHRC through a resolution passed in 2019.

The tabled resolution is still up for amendment but is expected to be voted on by the UNHRC before the 45th Session ends on October 6.

From zero to tabled

Human rights lawyer Edre Olalia of EcuVoice said that the proposed resolution is “not enough, but it’s not bad at all,” only if the Philippine government is genuine and acting in good faith, and would not veer towards evading accountability over killings.

“The nagging questions here are: Did they enter the resolution because it wants to engage or do they want to temper international pressure?” Olalia asked.

He noted that the tabled resolution is an improvement from the zero draft, or the first version introduced jointly by the Philippines and Iceland during informal meetings in September 2020.

The zero draft, debated and opposed by various civil society organizations, fell short of the expectations of victims and human rights groups, according to Olalia.

“We viewed the zero draft as unacceptable, even odd,” he said. “Our concern was if the zero draft remained, it [would] embolden the perpetrators and the enablers of the human rights situation here.”

Some provisions were already deleted and revised, as product of negotiations. The deleted parts included the noting of “accomplishments and political context” of the Duterte government.

The tabled resolution instead highlighted the importance for the government to “ensure accountability for human rights abuses and violations.”

“[The tabled resolution] reflects the continuous efforts and attempts of many to tweak, try to reflect the reality on the ground, or at least highlight the accountability,” Olalia said.

Compel to let Bachelet in?

The draft resolution was placed before the UNHRC in the aftermath of a scathing report by Bachelet, who said that the drug war is being carried out “without due regard for the rule of law, due process, and human rights.”

Figures from the Philippine National Police show that there have been 7,884 deaths during police operations from July 1, 2016 to August 31, 2020.

The number does not reflect the victims of vigilante-style killings. Human rights groups estimate the total number of fatalities in the drug war to have reached more than 27,000 already. (READ: The Impunity Series)

The proposed resolution also asks Bachelet to monitor, update the UNHRC, and submit a report on the implementation of technical assistance to the Philippines’ human rights situation.

Karapatan secretary-general Cristina Palabay said that they hope amendments to the proposed resolution will clarify further the role of Bachelet and other UN experts in exercising their mandate when it comes to the “technical assistance” given to the Philippines.

“They have to ensure access to the country and that is the tricky part for the Philippine government,” Palabay said.

(It is important that the UN rights office be allowed to enter the country to look at the situation, because how will you offer technical assistance and capacity building if you don’t know the baseline reality?)

The draft resolution comes after years of tirades and threats from the Duterte government against UN bodies, officials, and experts over their criticism of abuses in the country.

It also comes in the face of mounting international mechanisms, including the latest resolution from the European Parliament and the preliminary examination of the International Criminal Court. – Rappler.com