Duterte defends pardon: ‘You have not treated Pemberton fairly’ 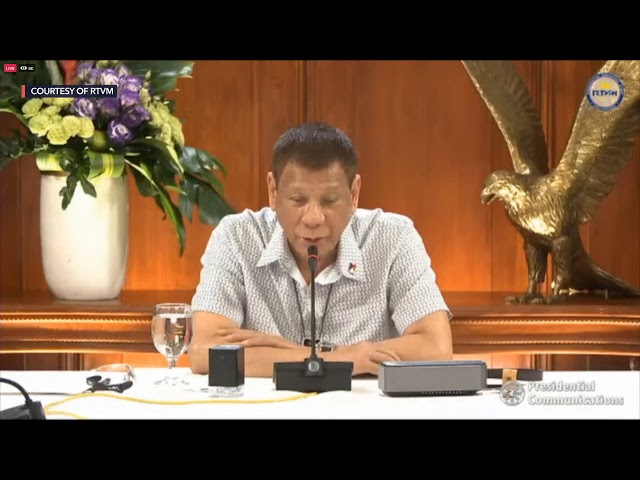 Facebook Twitter Copy URL
Copied
'If there is a time that you are called on to be fair, be fair,’ says President Rodrigo Duterte

In a televised address on Monday, Duterte said the Philippines was “not fair” to the American soldier over its failure to accurately compute his Good Conduct Time Allowance under Philippine law.

Reading the newspapers and listening to the radio, Duterte said he came to the conclusion that “it is not fair.” Duterte then told Executive Secretary Salvador Medialdea and Justice Secretary Menardo Guevarra that “it’s my decision to pardon.”

Duterte said, “If there is a time where you are called upon to be fair, be fair. Now sabi mo ‘Duterte, fair ka ba sa mga durugista?’ Ah, be cruel, be cruel. Putangina ninyo sinabi ko leche kayo, sinisira ninyo bayan.” (Now you said ‘Duterte, what about drug users?’ Ah be cruel, be cruel. Son of a bitch, I said you’re ruining the country.)

Pemberton, an American soldier convicted of homicide, was earlier sentenced to 10 years in prison last December 2015 over the killing of Laude.

The soldier, however, was set to be released 4 years earlier than his sentence after he was recently granted full credits of Good Conduct Time Allowance (GCTA) under Philippine law.

During his speech, Duterte said the government did not know what “factors” would contribute “to the equation that would arrive at the reasonable conclusion that these things happen and should be there in computing.”

Duterte was referring to questions over details of whether or not Pemberton’s GCTA credits should be computed from the time he was detained facing trial, or if it should start after his sentencing for homicide.

Duterte said there was no detailed record of Pemberton’s detainment when he was held at the Marines garrison since it “wasn’t the job” of the Marines to keep tabs on the American soldier at the time.

The Chief Executive then said there was no way to know Pemberton’s behavior while detained on trial.

Duterte said the Marines could have reported to the justice department or the police if Pemberton was unruly or acting as though “he were drunk everyday shouting,” but that no complaints were made.

“Kasi wala namang sumbong, ‘di walang ginawa ‘yung taong masama (Since no one complained, then he did nothing wrong),” he said.

While the President came to Pemberton’s defense, Laude’s lawyers earlier questioned whether or not the US soldier, who was covered by the Philippines’ decades-old Visiting Forces Agreement with the US, was even covered by the GCTA law and equal protection clause.

International law professor Romel Bagares earlier argued Pemberton was not entitled to GCTA nor was he covered by the equal protection clause as “there is a substantial difference in treatment between someone under the VFA and an ordinary convict.”

“Thus, a different modality applies to Pemberton,” said Bagares, who is one of the Laude family’s lawyers.

On Monday, Presidential Spokesman Harry Roque said Duterte’s pardon clears the issue of whether or not Pemberton is entitled to GCTA. Roque used to be the former lawyer of Laude’s family.

“This means Pemberton will be granted freedom, there is no more issue over whether or not he is entitled to GCTA,” he said. “The President cleared the punishment that was imposed on Pemberton.” (READ: Show Pemberton: Laudes slam Duterte pardon as part of cover-up)

Unequal before the law

Duterte said his decision to pardon Pemberton could not be questioned.

“It’s not because of that that I pardoned Pemberton. Kaligaya ko na lang magpakulong ng mga buang, mga gago (I enjoy imprisoning idiots). But you know, if there is a time where you are called upon to be fair, be fair,” he said.

Duterte, however, was quick to say the same exemption would not be afforded to those convicted under his administration’s anti-illegal drug campaign.

The issue has lawyers pointing out that unlike Pemberton, Filipinos did not equally enjoy the merits of the GCTA law.

“Laude’s case shows Filipinos have remained second-class citizens in their own country, their own welfare being secondary only to those of foreigners,” said the Center for International Law, one of the Laude family’s lawyers. – Rappler.com