Duterte says if Duque resigns ‘voluntarily,’ he would accept it EMBATTLED. Health Secretary Francisco Duque III gives a presentation on the pandemic situation in the country during a meeting with President Duterte.

Facebook Twitter Copy URL
Copied
Yet a week ago, President Duterte rejected even any voluntary resignation by the health chief

Philippine President Rodrigo Duterte said that if embattled Health Secretary Francisco Duque III would resign voluntarily, he would accept it, but he would not push the Cabinet member out himself.

(If Duque will offer to resign voluntarily, I will accept it. But if you tell me to tell him to resign, that will never happen.) 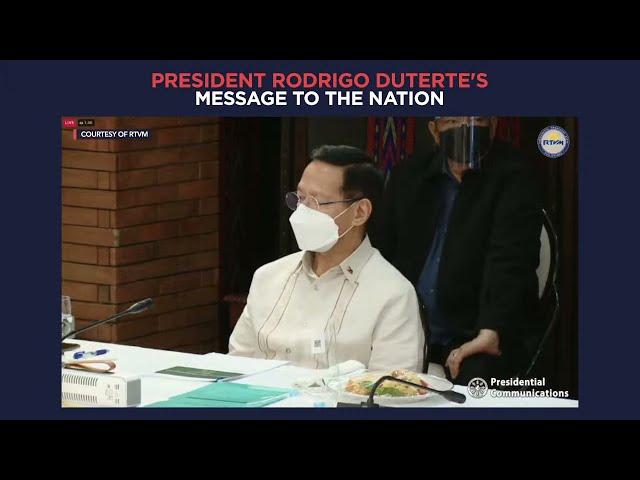 This was the opposite of what the President said last August 16, also in the presence of Duque. He had said he would reject even a voluntary resignation of Duque.

(I know you want to resign but you know I will reject it at this time. You have attempted to resign twice. Expect you to say something after this, that you will resign. I will tell you, no. You didn’t do anything wrong.)

But on Tuesday, Duterte continued to defend Duque, even saying that if this would lead to his political ruin, “so be it.”

“Maski kaming dalawa ni Duque and the rest of Philippines, I will stand by him. Kung nasira ako, eh di nasira. But I will never abandon a person just like that,” said the President.

(Even if it’s just me and Duque against the rest of the Philippines, I will stand by him. If I am destroyed, then I am destroyed. But I will never abandon a person just like that.)

He also again railed against the Commission on Audit, which issued reports putting the Department of Health under intense public scrutiny over how it handled pandemic funds.

Duterte said he doesn’t want COA to stop issuing such reports, only that the agency should have put a “preamble” that explicitly says it didn’t find outright corruption or loss of funds.

But the COA report on DOH 2020 spending was all about the deficient use of P67 billion worth of pandemic funds and made no explicit accusations of stolen tax payers’ money. However, many found COA’s findings of underutilized pandemic funds as alarming in itself.

Duterte ‘out of line’ for castigating COA – senators