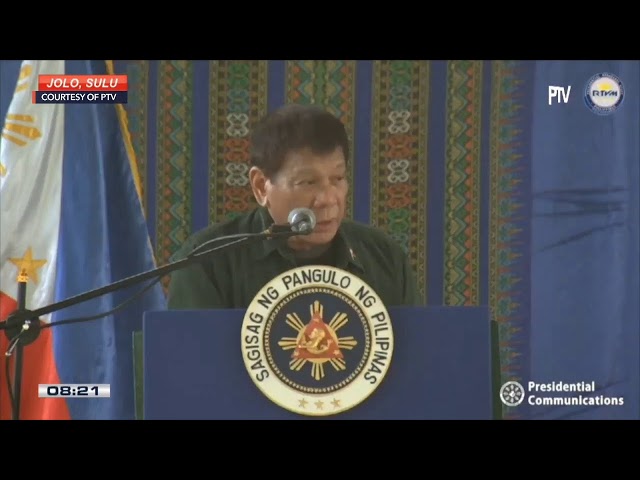 Facebook Twitter Copy URL
Copied
(3rd UPDATE) 'I would like to give importance to our soldiers, my soldiers, my police after their deaths,' says President Rodrigo Duterte

“This is to confirm that PRRD visited Jolo, condoled with some of the victims of the latest blast, and conferred with the mayor (Kerkhar Tan),” Presidential Spokesperson Harry Roque said in a statement.

The President was scheduled to be back in Manila on Sunday evening, Roque added.

During his visit to the blast site in Jolo, Duterte offered flowers in honor of the slain soldiers and was seen kissing the ground where the explosion happened.

In his speech, Duterte expressed admiration for troops’ sacrifice and patriotism, and also vowed to support the military in its fight against terrorism.

“Bilang isang Pilipino, ibibigay ko sa inyo ang lahat ng suporta na kailangan ‘nyo para matupad ang misyon ‘nyo dito sa Jolo,” Duterte said in his speech, which was aired Monday, August 31. (As a Filipino, I will give you all the support you need to carry out your mission here in Jolo.)

Duterte expressed frustration with efforts to stamp out terrorism, saying his remaining two years in office would not be enough time to address the security threat.

He then ordered soldiers to continue fighting against terrorists, but to “think about peace” during their battles.

“If we cannot agree, then we fight and we fight hard. Hanggang magkaubusan na (until we are all finished),” Duterte said.

“In God’s time, we will talk about peace. If it is hatred, it cannot be stopped anymore. It is an impossible dream,” he said. “But it behooves upon us, even leaders,  to try to talk as we wage war. I do not find anything reprehensible in talking to my enemy across the table and at the same time ordering my soldiers to fight. That’s the only way for us to move forward at this time.”

In a video message during the concert, Duterte said he was about to head to Jolo to visit the blast site and pay his respects to those killed in the explosions.

“I’ll go there to fulfill the duty of a commander in chief,” he added. “Magti-take off po kami, tamang tama, eh kaso lang sa ere walang ano, hindi ‘nyo ako mapanood.” (We’ll be taking off, and the timing is perfect. You won’t be able to watch me up in the air.)

The latest visit to Jolo is Duterte’s second in nearly two months. In July, he went and met with troops following the shooting of Army intelligence officers by police.

The Philippine National Police backed the imposition of martial law in Sulu following the blasts, but Defense Secretary Delfin Lorenzana did not support the proposal. Philippine Army chief Lieutenant General Cirilito Sobejana on Sunday then withdrew his recommendation for a province-wide martial law. – Rappler.com