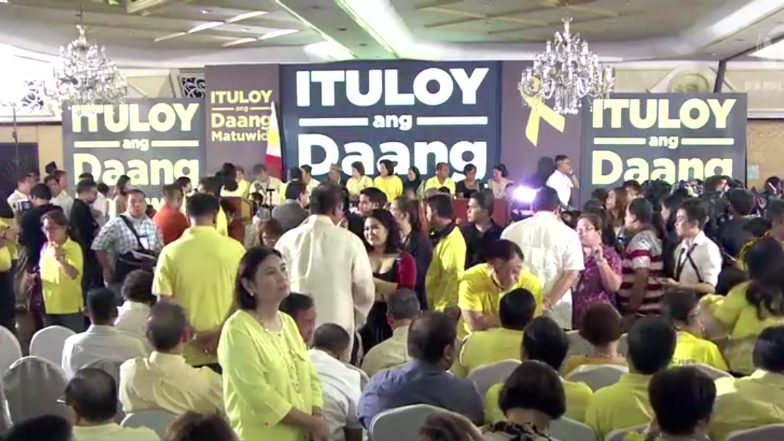 MANILA, Philippines (UPDATED) – Malacañang Palace calls it a “gathering of friends.” A congressman allied with the Liberal Party (LP) calls it a “meeting” of its members that just happens to be open to the media.

It’s called a lot of things but one thing is for sure: for Manuel Roxas II, the 10:30 am event at the historic Club Filipino on Friday, July 31, marks the beginning of his bid for the presidency in 2016.

Crowd began to build up at 9 am. The entire Roxas family is at the Cory Aquino Kalayaan Hall in the Club led by the Roxas matriarch Judy Araneta-Roxas, Roxas’s wife Korina Sanchez, and his son Paolo Gerardo.

Roxas will be announcing his plans for the coming presidential elections after he is endorsed by President Benigno Aquino III, who arrived at Club Filipino at 10:54 am.

Aquino’s endorsement of Roxas comes after months of hours-long meetings with him and key personalities for 2016. Among them, the person who came close to snatching the prized endorsement from Roxas: Senator Grace Poe. (READ: Mar Roxas: The long road to endorsement)

A Roxas campaign in 2016, LP sources tell Rappler, will not be about the man himself. It will be centered on an idea – for the reforms made through the Aquino administration’s “Daang Matuwid” to continue beyond 2016.

The campaign colors are a dead giveaway as well. Roxas’ trademark blue is now a thing of the past. Instead, the Liberal Party’s bright yellow takes center stage. If the guest list for the Friday event is any indication, it also means that the campaign – and the journey back to Malacañang – will rely heavily on the grassroots: local government, civil society, the beneficiaries of “Daang Matuwid.”

Aside from LP allies who hold key positions in government those who will be part of the program are: civil society organizations, a beneficiary of the government’s Pantawid Pamilyang Pilipino Program, a overseas Filipino worker turned businessman, the mayor of Lanao del Norte, and a business process outsourcing (BPO) worker.

Roxas’ bid will not be a “traditional campaign,” according to LP stalwart and Budget Secretary Florencio Abad in a previous interview with Rappler.

“It’s not going to be run the conventional way. The design of the campaign will be different,” Abad said.

The party machinery can only reach so far in the 2016 elections, the party believes. For them, it will ultimately be up to the voters to appreciate the merits of electing a good leader.

“Winnability is important but popularity and winnability aren’t the only ingredients so we need to take into consideration integrity, competence and experience,” Congressman Bolet Banal, an LP member, earlier told reporters in an interview. Roxas has been struggling in the surveys.

Although it seemed as if Aquino was torn between endorsing Roxas, an LP stalwart and Poe, whose survey numbers are nothing short of impressive, the President’s choice became clearer in the days leading up to the endorsement.

During his last State of the Nation Address (SONA), Aquino heaped praises on his interior secretary. “Mar, you are proving: You can’t put a good man down. Just as my mother and father had faith, so too should you have faith that our countrymen know who truly puts country before self,” said Aquino of Roxas.

For Aquino, the LP, and those that remain faithful to the coalition, the idea is to push for continuity.

Moments after the SONA, official government social media accounts and personal accounts owned by those connected to the LP began posting snippets of the SONA, the government’s achievements with the hashtag #SimulaPaLang.

The key message for the campaign is clear: with Mar Roxas at the helm, “Daang Matuwid” continues and the Aquino’s administration’s good governance and anti-corruption platform flourishes.

The immediate obstacle to this, of course, would be a Poe candidacy. The survey front runner, after all, still part of the ruling coalition. Vice President Jejomar Binay, who defeated Roxas in the 2010 presidential race, already launched his bid last July 1. – Rappler.com