Aug 20, 2015 8:35 PM PHT
Paterno Esmaquel II
Facebook Twitter Copy URL
Copied
For 2016, the review of the source code of voting machines is scheduled around 3 months before the elections – a process done only 4 days before polls in 2013 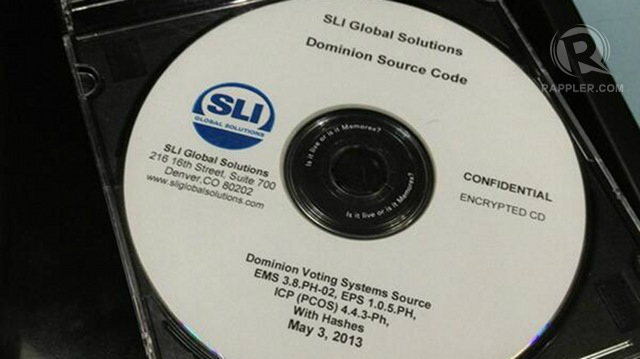 MANILA, Philippines – For the presidential elections in May 2016, the Commission on Elections (Comelec) said it is set to open voting machines for scrutiny earlier than it did in 2013.

Comelec Chairman Andres Bautista said the poll body is scheduled to open the machines’ “master blueprint” for review before February 2016, or at least 3 months before the elections.

This master blueprint is called the source code.

“This is important because organizations usually complain that they have too short a time to review the source code. So now we’re opening up everything so you have all the time now until the election day to review all the codes,” Comelec Commissioner Christian Lim said in Filipino.

A Philippine law defines the source code as “human-readable instructions that define what the computer equipment will do.”

Source codes contain instructions for counting and canvassing votes – which, if manipulated, could lead to fraud. (READ: FAQs: Why worry about PCOS code?)

To ensure close scrutiny of voting machines, Bautista said the Comelec is scheduling another review before the source code review.

Lim explained that the the base code “is the basic source code” of a program. This is the code that hasn’t been customized to comply with Philippine election laws.

The source code review comes as the Comelec is set to use 93,000 optical mark reader machines of controversial firm Smartmatic in May 2016.

Smartmatic’s critics have urged the Comelec to blacklist the Venezuelan firm from election services. (READ: Competitor scores Smartmatic for ‘monopoly’ in polls’)

The critics have claimed that Smartmatic machines can be easily rigged. (READ: Poll watchdog pushes for ‘laptop count’ to replace PCOS) – Rappler.com