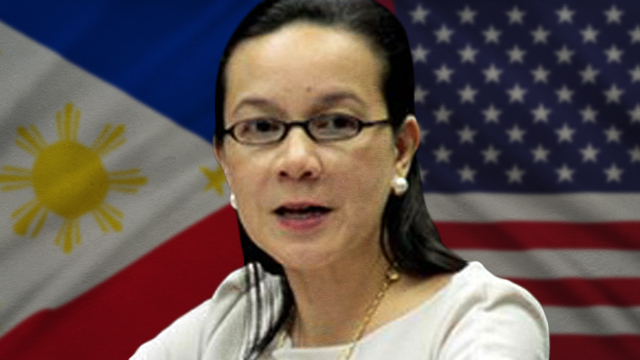 Amid fears of “tampering” of documents, the presidential polls front runner now says she is relieved to finally have the chance to explain her side in the proper forum.

Below are the main points of her reply and the timeline of her life as a Filipino, based on documents she submitted.

From birth to present

September 3 – This is Poe’s date of birth in documents. Edgardo Militar found infant Poe in the Parish of Jaro in Iloilo.

September 6 – Emiliano Militar reported to the Office of the Civil Registrar of Iloilo City that they found an infant. (READ: In Iloilo, Grace Poe finds new clues to real parents) 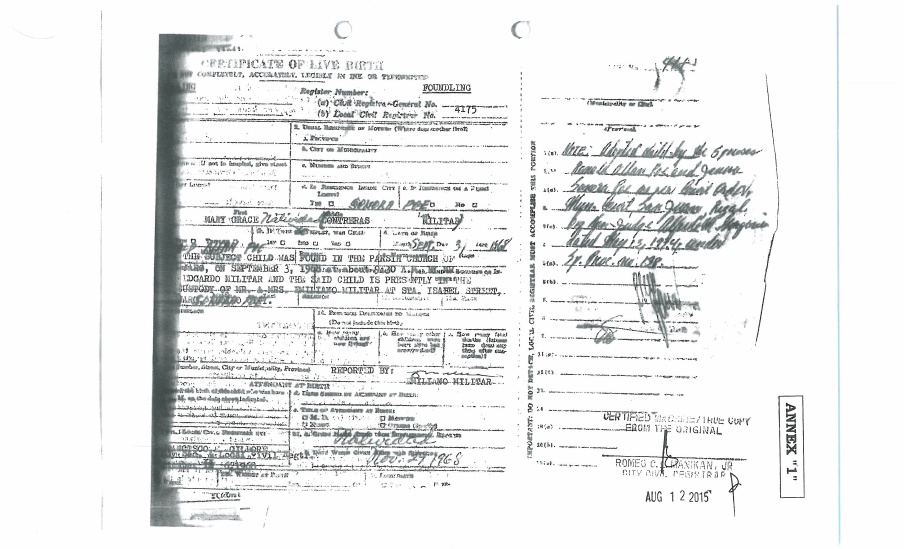 At the time, her name was legally changed to Mary Grace Natividad Sonora Poe. 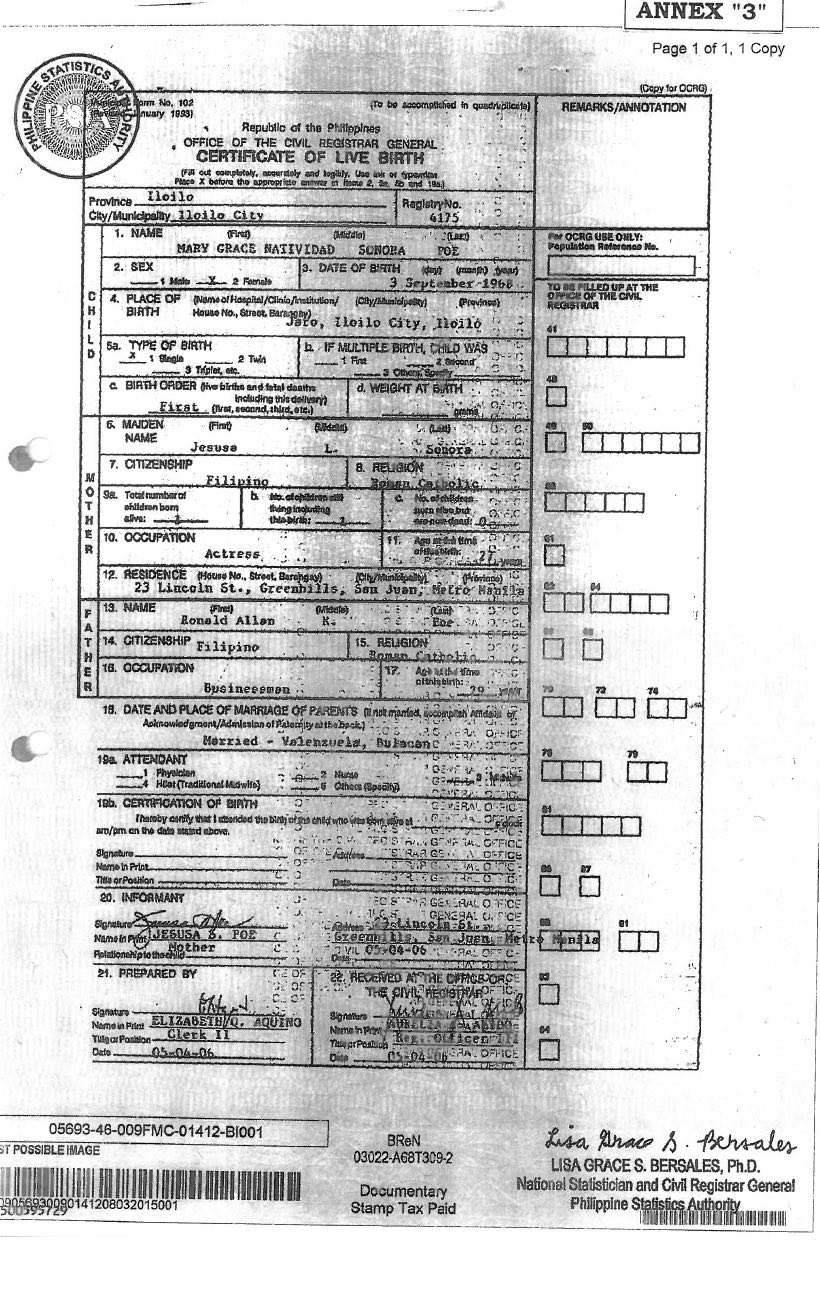 While petitioner Rizalito David said Poe’s adoption did not confer to her the same Philippine citizenship of her adoptive parents and that she remains to be stateless, Poe argued that the rights of a foundling are supported by international declarations, most of which the Philippines is a signatory to.

On August 21, 1990, the Philippines ratified the United Nations Convention on the Rights of the Child, protecting the right of a new-born to a nationality, and to ensure that every child is protected from statelessness from birth.

The 1966 International Covenant on Civil and Political Rights (ICCPR), which the Philippines ratified on October 23, 1986, recognized the right of every child “to acquire a nationality.”

While the country adopted these two conventions years after Poe was born, her camp said they are retroactive. Citing the Vienna Convention on the Law of Treaties, they said there is no prohibition against the retroactive application of treaties unless a different intention appears.

What is prohibited, Poe’s camp said, is the application of a treaty to a fact or status which does not exist before the treaty entered into force. After all, they said Poe remained to be a foundling before and after the ratifications.

Poe’s camp also cited the deliberations of the framers of the 1935 Constitution. While it did not expressly mention foundlings in Section 1, Article 4, former Senator Manuel Roxas said they would not include foundlings because the number of cases are few and that international laws are there to protect them.

“Mr. President, my humble opinion is that these cases are few and far in between, that the constitution need [not] refer to them. By international law the principle that children or people born in a country of unknown parents are citizens in this nation is recognized, and it is not necessary to include a provision on the subject exhaustively,” Roxas said, as cited by Poe’s verified answer.

Poe’s lawyers also cited other countries that have the same citizenship law as the Philippines (jus sanguinis or “by blood”). Countries such as Austria and United Kingdom have passed laws that presume foundlings to be born of parents who are citizens of the country in which they are found.

Her lawyers also argued that the Philippines had long recognized the generally accepted principle of international law on foundlings. Citing DOJ Opinion Number 189, series of 1951, Poe’s camp said the DOJ recognized foundlings as citizens of the country in which they are found. 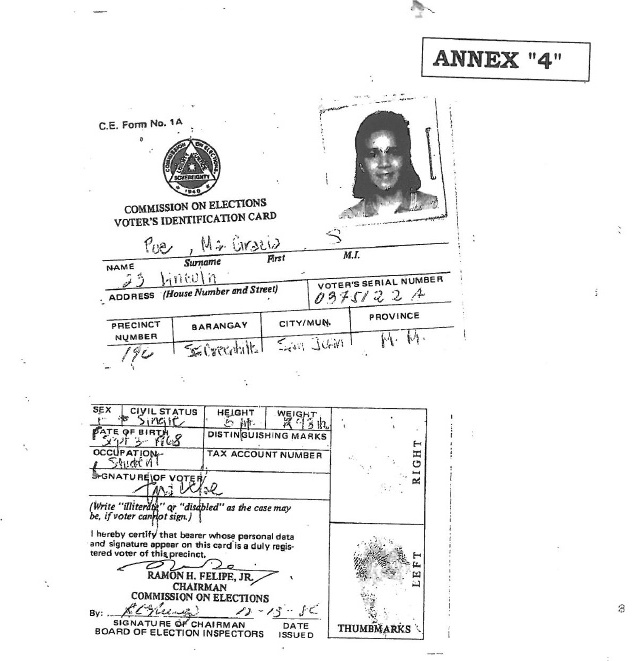 April 4 – As a deemed natural born Filipino, she was issued a Philippine passport.

July 29 – Then newlyweds Neil and Grace went to the US to start a family.

April 16 – Son Brian was born a US citizen in Washington, DC.

May 19 – Poe was issued a Philippine passport. She went back to the Philippines to give birth to her second child.

July 10 – She gave birth to second child Hanna in the Philippines.

October 18 – Poe was naturalized as a citizen of the US after being petitioned by her husband who is a dual citizen. As she took an oath of allegiance to the US, she renounced her Philippine citizenship:

The camp of Poe, however, said Poe took an oath of allegiance to the US “only as a necessary condition for her naturalization.”

“After her naturalization, [Poe] maintained her ties to the Philippines and visited the country frequently. She never foreclosed the possibility of one day returning to the Philippines, as indeed, she returned in 2005,” stated in the verified reply.

April 8 – Then pregnant Poe went back to the Philippines with second daughter Hanna.

May 10 – The 2004 presidential elections was held. Poe’s father FPJ ran and lost to then incumbent President Gloria Macapagal Arroyo in what was widely believed to be a rigged elections.

June 5 – She gave birth to youngest child Anika in the Philippines.

July 8 – She went back to the US with Hanna and Anika.

December 13 – Upon hearing of the condition of her father, she went back to the Philippines and arrived on this date.

From December 13 to February 3, 2005 – Poe stayed in the Philippines to help arrange father’s funeral and settle his estate.

February 3 – She left the Philippines and went back to the US.

May 24 – After deciding as a family, Poe returned to the Philippines while husband Neil stayed in the US to finish projects and arrange the sale of their US home. 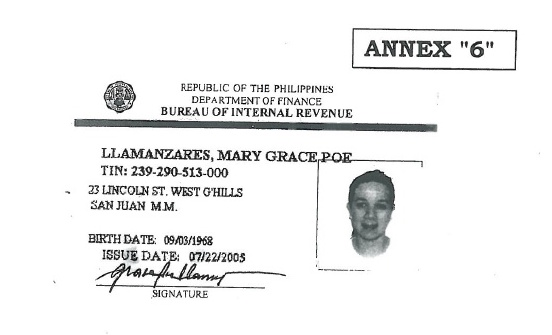 It is during this year that Poe, a US citizen at the time, said she started her residency in the Philippines.

May 4 – After resigning from his work in the US, husband Neil returned to the Philippines.

July 7 – As required by Republic Act Number 9225 or the “Citizenship Retention and Reacquisition Act of 2003,” Poe took her Oath of Allegiance to the Republic of the Philippines for her to re-acquire her natural born status. She also requested the same for her 3 children, which is allowed under the same law.

Section 3 of the law states that “[a]ny provision of law to the contrary notwithstanding, natural-born citizenship by reason of their naturalization as citizens of a foreign country are hereby deemed to have re-acquired Philippine citizenship upon taking the following oath of allegiance to the Republic:” 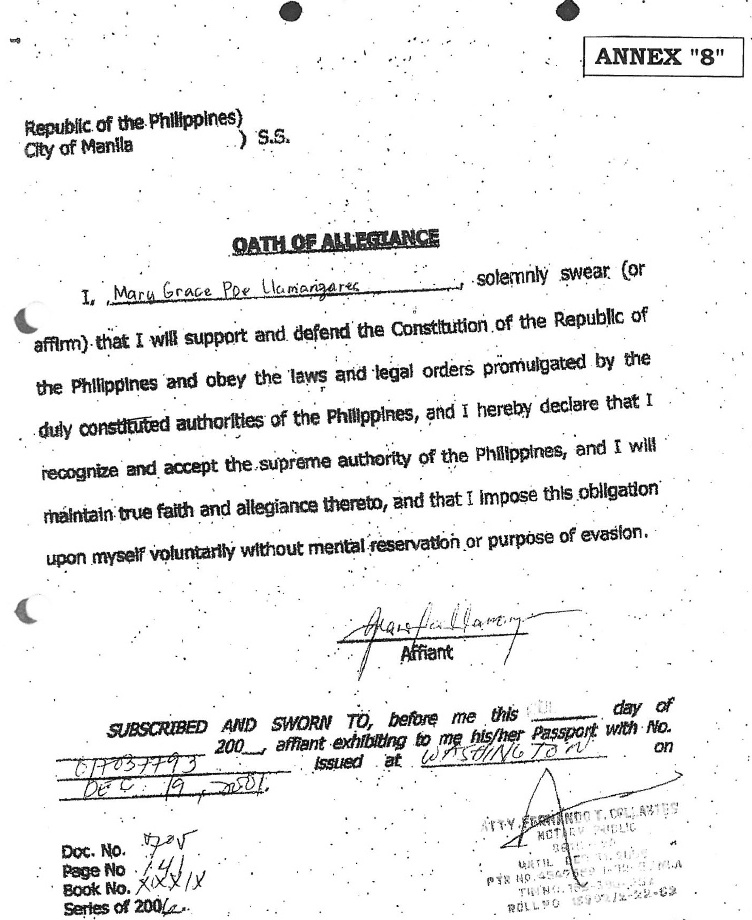 July 10 – Poe filed for dual citizenship, in accordance to RA 9225. Ironic as it may seem, this law used by Poe to push for her case was signed by former President Gloria Arroyo in 2003, who allegedly cheated her father in the 2004 presidential elections.

July 31 – The BI issued Identification Certificates (IC) for Poe and her kids. This means Poe and her 3 kids re-acquired their Philippine citizenship as per the law. At this point, they are now dual citizens of the US and the Philippines. 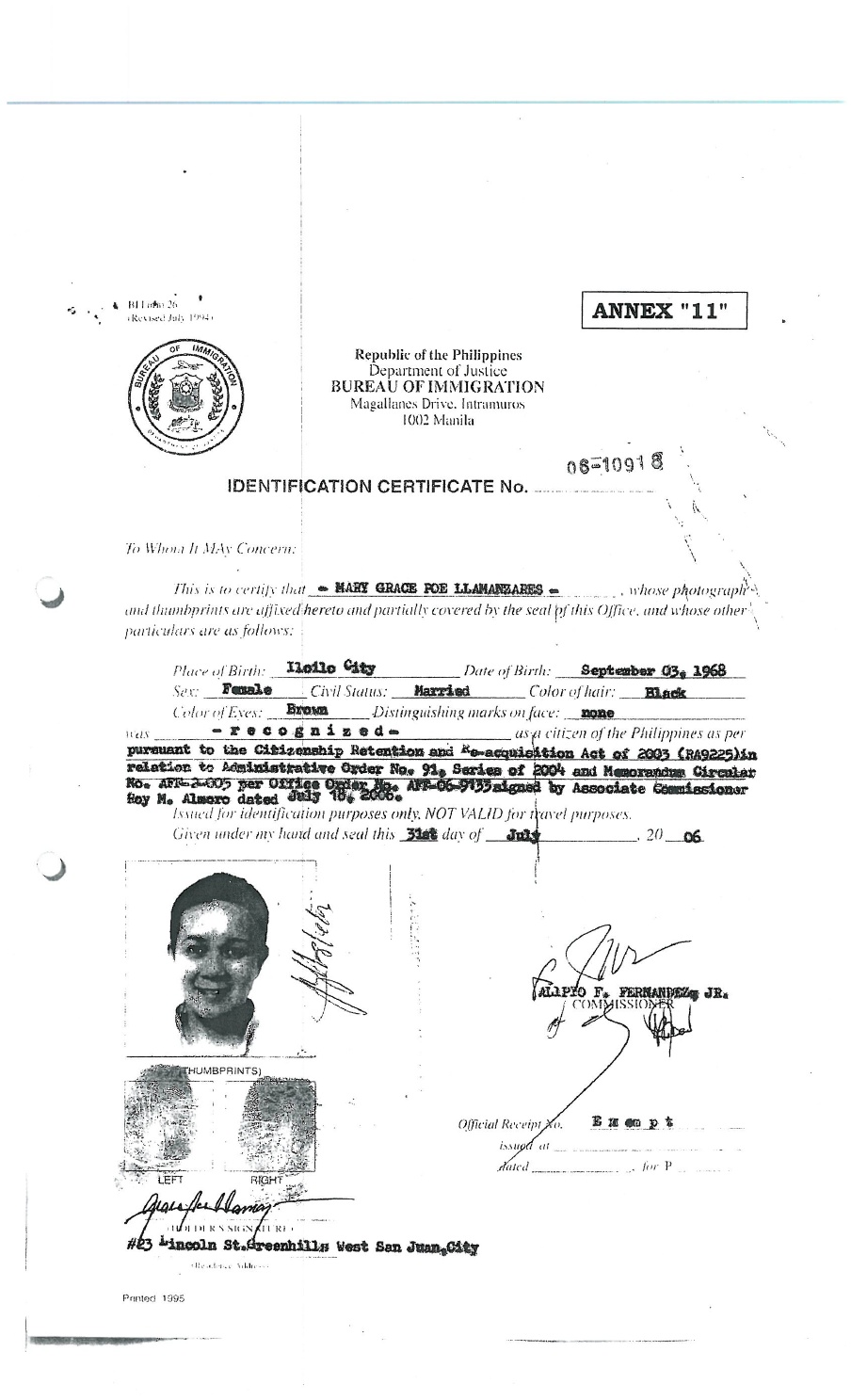 August 31 – Poe registered as a voter of Barangay Santa Lucia, San Juan. It is a requirement for a voter to have resided for at least a year in the Philippines before the elections. With this and with the presumption of regularity, Poe’s voter ID implied she was in the country not later than August 31, 2005.

October 13 – As a dual citizen, she was issued a Philippine passport.

Published reports said that Poe used her US passport from 2005 to December 2009 at least 21 times in entering and leaving the country. Some say these repeated acts alone may weaken her defense of animus revertendi or intention to return to domicile. (READ: Grace Poe and Pandora’s box: Legal issues in her candidacy)

It is important to note, however, that from 2005 to early July 2006, Poe was a US citizen and, therefore, only had a US passport.

From July 2006 to 2009, meanwhile, she already acquired dual citizenship of the Philippines and the US and had the discretion to use either of the two passports in her travels.

Poe’s camp argued that her oath of allegiance to the Philippines in 2006 “was not ‘forfeited’ or rendered ‘meaningless’ simply because she continued using her US passport after she had reacquired her natural-born Philippine citizenship on 7 July 2006.”

October 6 – President Benigno Aquino III appointed her as chairperson of the Movie and Television Review and Classification Board (MTRCB), but Poe said she “did not accept it immediately.” In the verified answer, Poe said she was informed that the same RA 9225 prohibits appointment of a dual citizen to government UNLESS she renounces her foreign citizenship.

Section 5 of the law states that:

“Those seeking elective public in the Philippines shall meet the qualification for holding such public office as required by the Constitution and existing laws and, at the time of the filing of the certificate of candidacy, make a personal and sworn renunciation of any and all foreign citizenship before any public officer authorized to administer an oath.” 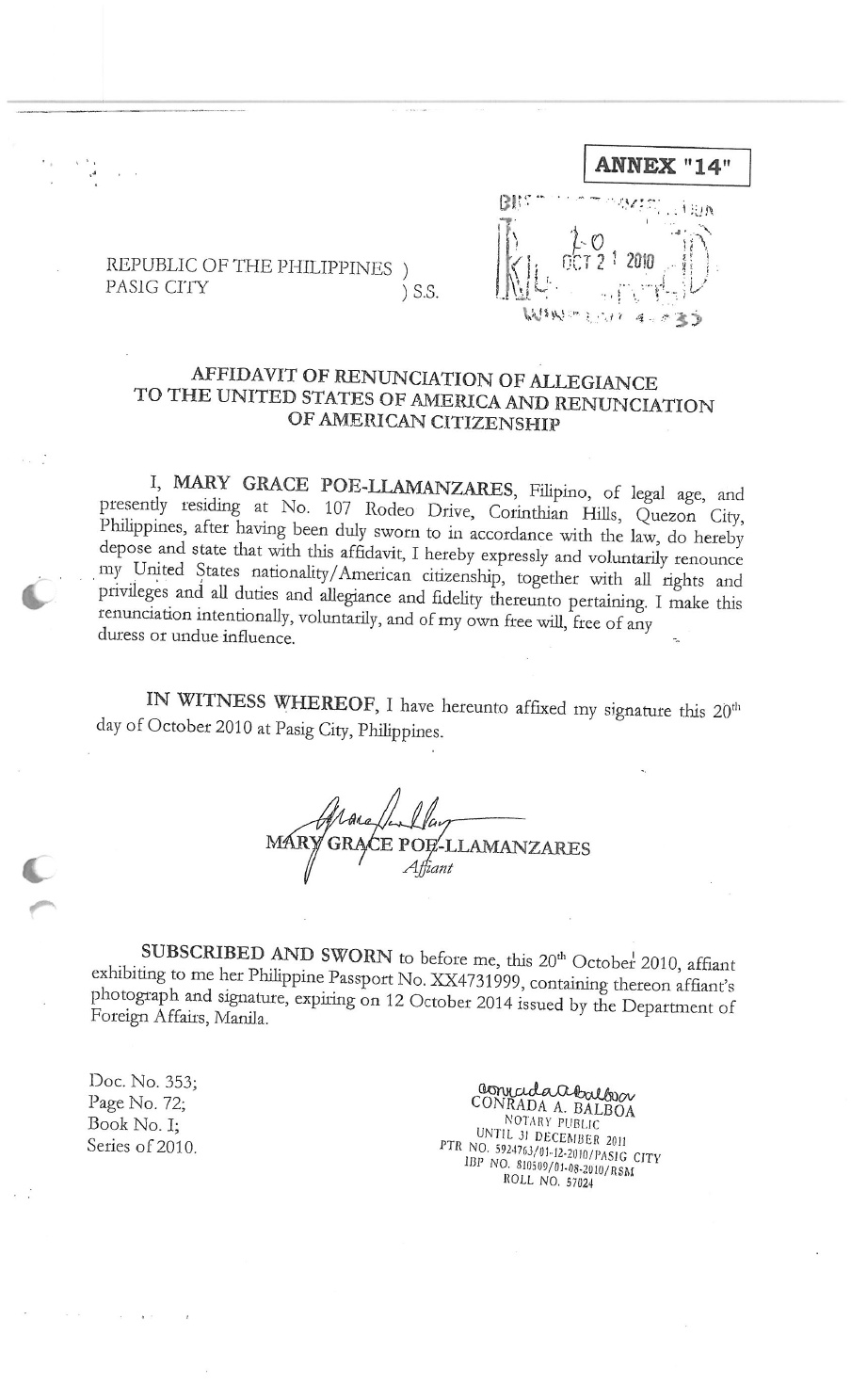 October 21 – She submitted to the BI the notarized document and took oath as MTRCB chair. Poe argued that when she sat as government official, she had already renounced her American citizenship.

Her lawyers also argued that “under Philippine law, Poe continued to be a US citizen until 20 October 2010 when she renounced her US citizenship” before a notary public.

They added “under the laws of the US, her act of taking her oath of office as MTRCB Chairperson was an expatriating act which caused her to lose her US citizenship.”

In her former US passport, it was indicated that she self-expatriated herself on October 21, 2010, the day she took oath in Philippine government.

July 12 – she executed before the Vice Consul at the US Embassy in Manila an Oath/Affirmation of Renunciation of Nationality of the United States. Poe also accomplished a sworn questionnaire before the US Vice consul.

On page 4 of the questionnaire, Poe wrote:

December 9 – Poe’s Certificate of Loss of Nationality of the US was signed by the Vice Consul on this date.

In this document, it was stated that Poe “expatriated her self” on October 21, 2010, when she took an oath of office as MTRCB chair. This is the same date shown in her former US passport. 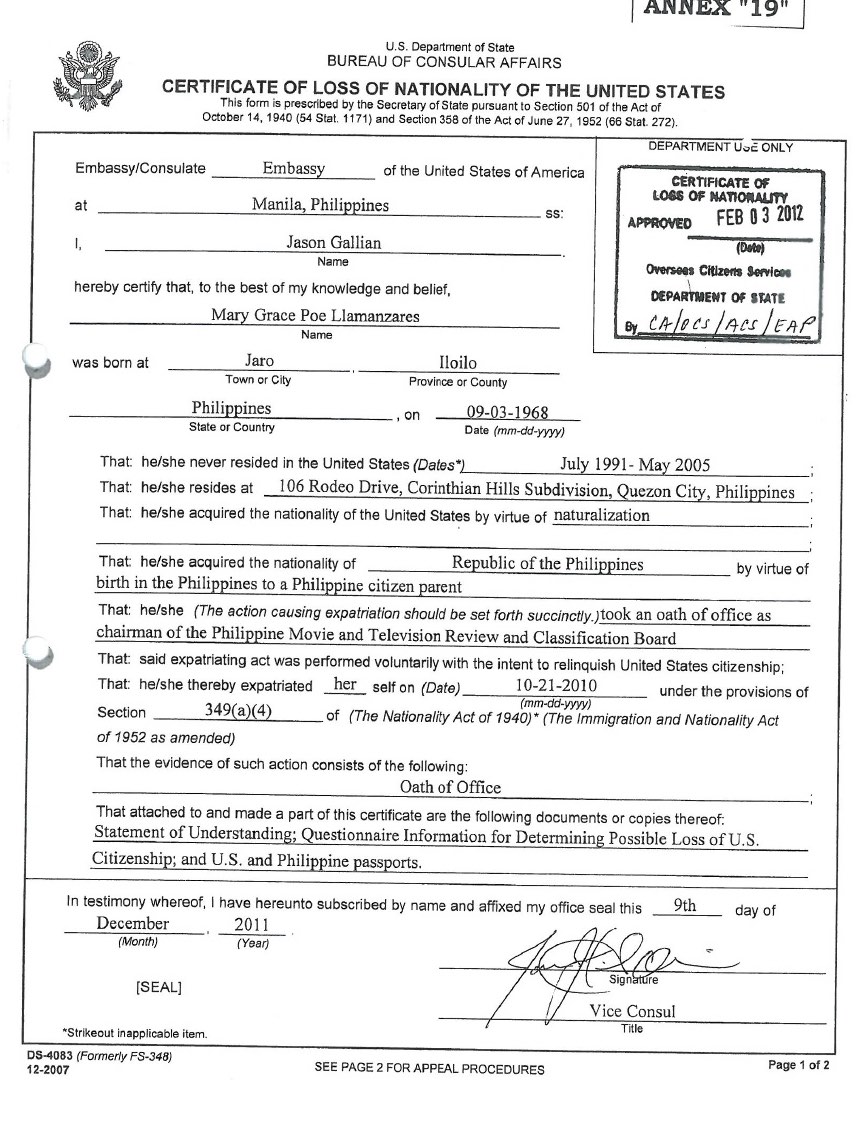 February 3 – The certificate of loss of nationality was “approved” by the State Department only in 2012.

(Now, about the US, they released my renunciation in 2012. Why? Because they have a long process. You cannot just go to US embassy to submit. The have to look into your tax returns from the last 5 years, your properties in the last 5 years. There are many documents needed.)

Petitioner David accused Poe of lying in her COC when she said she had been residing in the country for 6 years and 6 months as of May 13, 2013. With all the arguments earlier discussed, Poe’s lawyers said this allegation is false, as Poe met the two-year residency requirement for a senator.

In a foreshadowing of what may be thrown at her in 2016, Poe’s lawyers, in the verified reply, argued that Poe made an “honest mistake” in her COC.

“The truth is that, as of 13 May 2013, [Poe] had been residing in the Philippines for more than six (6) years and six (6) months.” They said this mistake was an “excusable error arising from complex legal principles that a layman is not expected to fully know, much less understand.” They said Poe was not accompanied by a legal counsel when she filled out the form.

They also argued that “good faith is more manifested” because Poe indicated a shorter period of stay in her COC, saying she would have benefitted more if she indicated a longer period. This, they said, “clearly shows that she honestly misunderstood what was being asked of her in her COC, and that she did not intend to mislead or deceive anyone.”

Her camp said it is not the first time a candidate committed an honest mistake in stating her period of residency in the COC.

“The Supreme Court was faced with precisely this problem in Romualdez-Marcos vs. COMELEC. However, instead of making the candidate pay for her mistake by disqualifying her, the Supreme Court stressed that the ‘residency requirement’ is ultimately a question of fact. The statement in the COC is not ‘decisive.’”

May 16 – Poe was proclaimed senator of the Philippines after topping the senatorial elections.

December 19 – As a senator, she was issued a diplomatic passport.

March 18 – She was issued a regular Philippine passport.

August 6 – David filed a disqualification case against Poe before the Senate Electoral Tribunal.

August 17 – David filed a similar case before the Commission on Elections.

September 1 – Poe submitted her verified answer with supporting documents to the SET, with the following prayers: