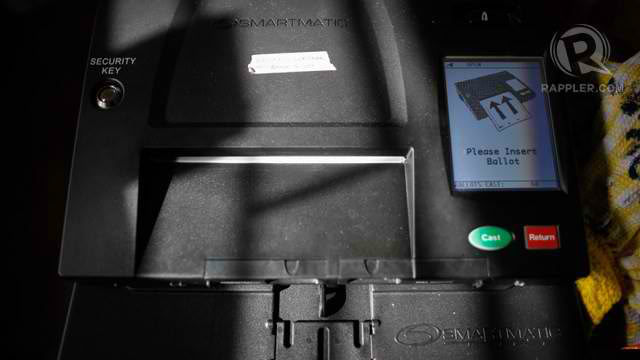 MANILA, Philippines – The Commission on Elections (Comelec) on Tuesday, September 8, said it is set to “clean” and reuse at least 5,000 old vote-counting machines in the Philippines’ presidential elections in 2016.

Disponer means “to prepare,” “to bring order to,” or “to improvise.”

“The commission en banc has decided that we will have the old PCOS cleaned – not all of them but several thousands – and part of these will be used as voting machines for persons with disabilities, among other groups,” Guanzon said in a news conference.

The Comelec is also planning to make the cleaned PCOS machines available for local absentee voters. Because these voters – including media personnel, teachers, and soldiers – have to work on election day, the Comelec allows them to vote on earlier dates.

This plan comes weeks after the Comelec, in a unanimous decision, junked its initial option to refurbish the 82,000 old PCOS machines that the Comelec already bought from technology provider Smartmatic.

The Philippines used these PCOS machines in its first two automated elections in 2010 and 2013.

Instead of refurbishing these machines, the Comelec decided to lease 93,000 new vote-counting machines from Smartmatic. In making this decision, the poll body cited time constraints. (READ: Poll exec hits Smartmatic for refusing to fix PCOS)

‘We cannot really clean all’

Guanzon, a former Commission on Audit commissioner, pointed out it would likely take around two hours to clean each PCOS machine.

She added that the Department of Science and Technology will help the Comelec “find or produce the basic parts” of the PCOS, such as the film, the battery, and the roller.

The cleaning will happen in the Comelec’s warehouse in Santa Rosa, Laguna.

Guanzon, a former mayor of Cadiz City in Negros Occidental, explained to reporters: “This is like: you have 80,000 machines, you’re gonna clean maybe one-third of them and see which batteries are still working, which rollers are still working. For those batteries that are working well, we can transfer them to better functioning machines.”