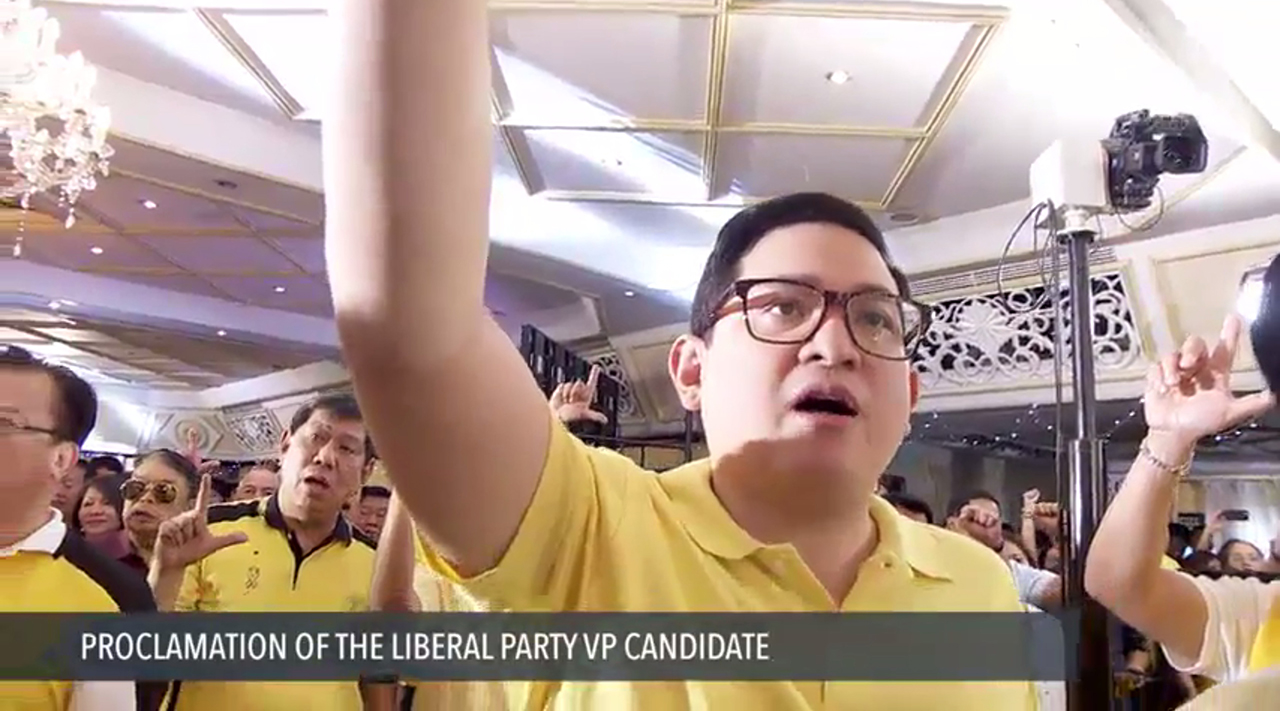 MANILA, Philippines – In a country where political campaigns are run by the same old names and personalities, neophyte legislator and Liberal Party (LP) vice presidential bet Maria Leonor “Leni” Robredo will have a first-term legislator as her campaign manager for the 2016 national elections.

According to sources close to Robredo’s campaign, Senator Paolo Benigno “Bam” Aquino IV will be Robredo’s campaign manager in a race that will see her battle it out with at least 3 senators who have had at least one Senate term and several congressional terms behind them.

He’s the choice of no less than his cousin, President Benigno Aquino III, according to the same sources.

Sources told Rappler that Senator Aquino and Robredo held their first meeting last September 26. This was before both went to the Social Good Summit organized by Rappler at the Resorts World Manila, where they were speakers.

Robredo announced her candidacy on Monday, October 5, or more than 2 weeks after the post was first offered to her by the ruling LP and its standard-bearer Manuel Roxas II. (READ: Low-key political wife goes national)

It was Bam Aquino himself who warmed up the crowd before the event.

Even when the LP, led by Roxas and President Benigno Aquino III, was still wooing Senator Grace Poe to be the administration’s vice presidential bet, there were many in the ruling party who wanted Robredo from the get-go.

Senator Aquino was one of them. Quezon City Represenative Jorge Banal told Rappler that Aquino and his staff have been working alongside Robredo’s staff “since day one.”

“The next important question is: Who should be Mar Roxas’ running mate? I don’t know who he has in mind, or who the…

But even as it became obvious that Poe was planning her own presidential run, Robredo herself was adamant that the vice presidency wasn’t for her. The highest national post she had in mind for 2016, she said then, was a Senate seat.

Behind the scenes, a campaign team was formed to prepare for that possible Senate run. Mixed into that campaign were people from Senator Aquino’s own staff.

Other groups were also pitching in to help prepare for Robredo’s national campaign – should it be for the Senate or for the second-highest elective position in the country.

A month after the signature campaign was launched in front of a small community center at the Baseco Compound in Manila, the Camarines Sur representative finds herself at the historic Kalayaan Hall in Club Filipino, where Roxas had earlier announced his bid for the presidency.

Although he’s a legislative neophyte himself, Senator Aquino is no stranger to politics.

The President’s namesake is the son of Paul Aquino, a veteran political operator who was once the campaign manager of former president turned Pampanga Representative Gloria Macapagal Arroyo and the late Speaker Ramon Mitra Jr, who ran (but lost) for president in 1992.

Paul Aquino is the brother of the slain Senator Ninoy Aquino, father of the President’s.

Paul Aquino’s past was thrust back into the limelight in 2013, when his son ran for senator. Back then, opposition spokesman Navotas Representative Toby Tiangco questioned the younger Aquino’s rise in surveys. Tiangco then challenged Paul Aquino to speak up about alleged election cheating during Arroyo’s time.

Behind the scenes, Paul Aquino played a crucial role in the campaign of Bam, who placed 7th out of 12 slots.

The son is no stranger to campaigns and mobilizations.

Bam Aquino was once Chairman of the National Youth Commission (NYC) and is a “Champion” of “Kaya Natin,” a movement founded by Robredo’s late husband, former interior secretary and Naga City Mayor Jesse Robredo.

The young Aquino was among the 4 administration bets endorsed by the group during the 2013 mid-term elections. “Kaya Natin” is a movement pushing for electoral reforms, government transparency, social accountability, and people empowerment.It counts among its “champions” former and incumbent local officials from different political affiliations.

At least two incumbent senators are “champions” of the movement – Aquino and Senator Aquilino Pimentel III. Robredo herself is part of the group’s Board of Directors.

The people behind “Kaya Natin” are expected to be crucial cogs in Robredo’s campaign as well.

The 2016 elections will be a tough campaign for Robredo, whose term as Camarines Sur representative ends the same year. Unlike the 3 other legislators vying for the post, Robredo is a new entry to Philippine politics.

It doesn’t help that her numbers aren’t exactly promising either.

Robredo even trails behind the last vice presidential candidate to announce his 2016 plans, Senator Antonio Trillanes IV, who placed 8th with 4 percentage points.

The 3 – Escudero, Trillanes and Robredo – all trace their roots to Bicol. Escudero was a former Sorsogon representative while Trillanes’ father grew up in Albay. – Rappler.com