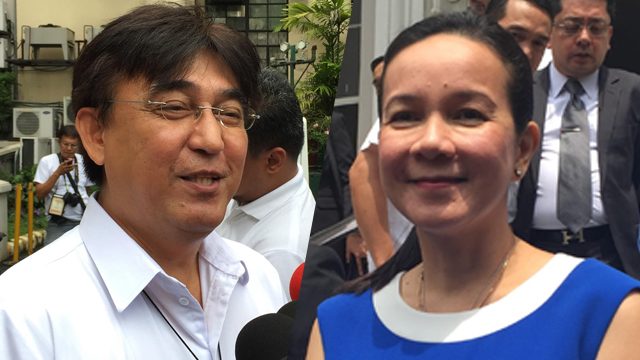 The camp of Senator Grace Poe has filed their memorandum before the Senate Electoral Tribunal (SET) past 5 pm Tuesday, October 6.

This is the deadline for both parties involved in the disqualification case against Poe, who is eyeing the presidency in the 2016 elections.

The case was filed by Rizalito David, a defeated senatorial candidate in 2013. The petitioner is questioning Poe’s qualification as senator, arguing that since she is a foundling, there is a possibility that she is not a natural born Filipino and should have been disqualified as senator. (READ: TIMELINE: Grace Poe’s citizenship, residency)

David’s camp filed an Offer of Evidence on September 30, and a memorandum on Monday, October 5. (READ: David’s camp ‘confident’ majority of SET will vote vs Grace Poe)

Now both camps await the decision of the 9-member tribunal composed of 3 Supreme Court justices and 6 senators, with David’s camp hoping for the decision to come out before the filing of Certificates of Candidacy for the 2016 elections next week.

“The issue that remains before the Senate Electoral Tribunal is the question of whether Senator Poe is a natural born Filipino,” Justin Mendoza, Poe’s legal counsel, said in a mix of English and Filipino as he spoke to reporters after the filing on Tuesday.

Mendoza insisted that the burden of proof remains with David’s camp, but the latter has not proven that Poe’s parents are foreigners – the only way, according to the lawyer, to exclude the senator from the enumeration of citizens under the 1935 Constitution.

“If she’s a foundling, you’re just saying the parents are unknown. Therefore, there is a possibility – and in the case of Senator Poe, a distinct probability – that her parents are Filipinos. She was born here, she was found here, in a Roman Catholic Church. Even her features are ordinarily associated with Filipinos,” he added.

He also noted that the intent of the framers of the Constitution was to consider a foundling as a natural born citizen presumed to have been born to parents who are Filipinos.

“The definition of a natural born citizen under the Constitution is precisely that a citizen from birth who does not have to perform any act to perfect or acquire her citizenship, and that is precisely what the case is for Senator Poe,” Mendoza said.

He said another way to define a natural born citizen is to show that the person is not naturalized.

Poe’s camp has long insisted that the senator is not naturalized because she “never started out as an alien or a foreigner” and “she did not have to perform any act…to become a Filipino citizen from the start.”

In their memorandum, Poe’s camp asked the tribunal to:

Meanwhile, according to Mendoza, the tribunal has required Poe to submit the results of her DNA test 30 days from the September 21 oral arguments. – Rappler.com