Erap to run for president if Poe, Binay disqualified

Oct 13, 2015 4:12 PM PHT
Buena Bernal
Facebook Twitter Copy URL
Copied
(UPDATED) The Manila Mayor says he still has time to consider a presidential bid before December 2015, depending on the results of the legal cases filed against Poe and Binay 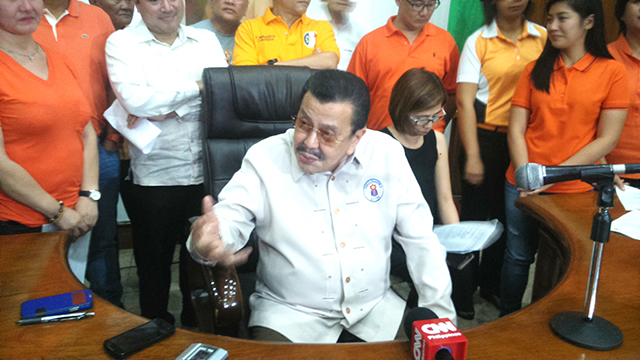 MANILA, Philippines (UPDATED) – Former President now Manila Mayor Joseph “Erap” Ejercito Estrada said he will run for president in 2016 if both the bets he is willing to support are disqualified.

Estrada said Tuesday, October 13, that he can still opt and seek a higher post if both Grace Poe, the daughter of his close friend and movie actor Fernando Poe Jr, and his other close friend, Vice President Jejomar Binay, who are running for president in the 2016 elections are disqualified due to pending cases against them.

Binay initially faced plunder charges in relation to an over-priced multi-million-peso Makati City parking building contract. Poe, on the other hand, is threatened with disqualification over citizenship issues. The Constitution requires presidential aspirants to be natural-born citizens.

On Monday, October 12, the Office of the Ombudsman said it has found probable cause to indict Binay, his son dismissed Makati Mayor Jejomar Erwin Binay Jr, and 22 others for graft over alleged anomalies in the construction of the Makati carpark building project.

Estrada said he is considering a run to “preserve democracy in the country.”

On his first term as chief executive of the Philippine capital, Estrada is running for reelection this 2016. But he said he still has time to consider a presidential bid before December 2015, depending on the results of the legal cases filed against Poe and Binay.

Internal surveys reportedly indicate that Estrada is not ranking well and could lose if he seeks reelection as Manila mayor.

Estrada is set to file his certificate of candidacy (COC) for the Manila mayoralty on Wednesday, October 14. He boasted to the press on Tuesday the pro-poor programs he instituted as Manila mayor.

In an earlier speech a week before the official filing of COCs, Estrada outlined measures he enforced when he was president that, he said, improved the economic condition of the poor. These included preventing electricity rate and train fare hikes.

On Tuesday at the Manila City Hall, Estrada proclaimed the congressional and city council candidates for Manila under his Manila Puwersa ng Masang Pilipino (PMP).

He said he has yet to consult the candidates about who to support as president among the present bets who have announced their bids.

He, however, endorsed for vice president in 2016 the son and namesake of former Philippine dictator Ferdinand Marcos. Senator Ferdinand “Bongbong” Marcos Jr made his vice presidential bid official on Tuesday before the election commission in Intramuros, Manila.

Estrada on Tuesday also vowed not to leave his 2016 city line-up hanging if ever he runs for president instead.

He said his 2013 running mate, Manila Vice Mayor Isko Moreno, can run as mayor of the Philippine capital.

The 3-termer Vice Mayor is set to file his candidacy certificate on October 16, earlier hinting at a senatorial bid.

The city of Manila is beset with perennial problems of heavy vehicular congestion and flooding in major roads, vulnerable employment, and crime in densely poor areas. – Rappler.com

*Editor’s Note: In an earlier version of this story, Binay’s rating in the Laylo Survey was initially listed as 4%. This was a typographical error. This has been corrected to indicate 14%.