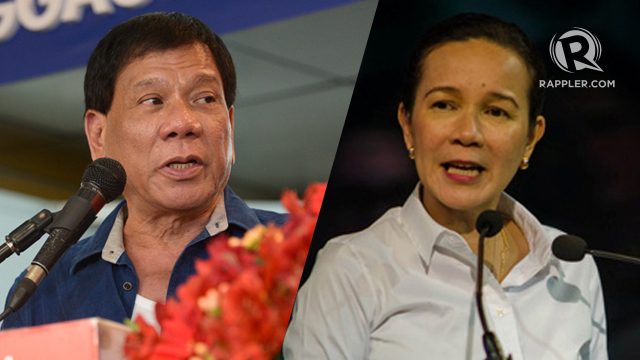 Facebook Twitter Copy URL
Copied
Grace Poe's spokesman, Rex Gatchalian, reiterates the senator is a natural-born Filipino, and that there was nothing political about the decision of the Senate Electoral Tribunal

This was how Davao City Mayor Rodrigo Duterte expressed his disappointment over the decision of the Senate Electoral Tribunal (SET) on Senator Grace Poe’s citizenship issue.

Stressing that the SET case is not a political issue but a constitutional and legal issue, Duterte – who has been giving mixed signals about his 2016 plans – declared on Thursday night, November 19: “The option for me to run for president is already open.”

But Poe’s camp on Friday, only reiterated what the SET decision meant: that Poe is a natural-born Filipino. (READ: Senate Tribunal denies disqualification case vs Poe)

“In a democracy, everyone is entitled to their own opinion. We respect Mayor Duterte and we respect his opinion. But to reiterate, Senator Poe is a natural-born Filipino. International laws and covenants substantiate this fact,” Poe’s spokesman, Valenzuela Mayor Rex Gatchalian, said in a statement Friday, November 20.

He denied that the decision was based on politics and stressed that the 5 senators who voted in favor of Poe – Paolo Benigno “Bam” Aquino IV, Pia Cayetano, Cynthia Villar, Loren Legarda, and Vicente “Tito” Sotto III – all come from different political parties.

“Clearly there is no political accommodation. The 5 members of the SET crossed party lines to uphold the rights of foundlings like Senator Poe,” Gatchalian added.

Aquino is from the ruling Liberal Party (LP), whose standard-bearer for the 2016 presidential elections is former Interior Secretary Manuel “Mar” Roxas II.

Cayetano and Villar are from the Nacionalista Party, while Legarda and Sotto are from the Nationalist People’s Coalition – the party widely believed to be supporting the tandem of Grace Poe and her running mate, Senator Francis “Chiz” Escudero.

Sotto is seeking reelection under the Poe-Escudero tandem. (READ: Cayetano is deal breaker in 5-4 SET vote for Poe?)

Duterte is not the first to cry foul over the SET decision. Manuelito Luna, lawyer of losing senatorial candidate Rizalito David, said the 5 senators voted “based on political considerations.”

One of the senators, Bam Aquino, already denied this. He even gave credit to the LP since “wala namang sumubok na impluwensiyahan ang aking desisyon (no one tried to influence my decision).”

(The expectation in politics is that your decision should be political. But sometimes, we have to think based on principles, based on conscience, and based on the trust given to us by the people.)

Poe’s lawyer George Garcia also shot back at David’s camp for criticizing the SET decision. He said David, who is also eyeing the presidency in the 2016, should move on.

“Mr David has been ill-advised for disparaging the SET decision. It was not a political decision but a clear-cut judgment based on prevailing jurisprudence,” Garcia said in a statement Friday.

Instead of all the talk, he urged David to look for “incontrovertible proof” that Poe is not natural-born.

“Why doesn’t Mr David do all of us a favor, stop assailing the SET and embark on a search for Senator Poe’s parents. And since he appears to be obsessed with Senator Poe’s foreign blood, then maybe he should start making more frequent trips abroad to embark on such a search,” Garcia added. – Rappler.com