Rodrigo Duterte: I am running for president 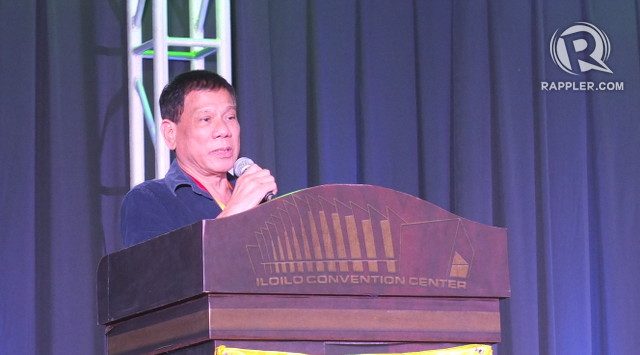 Facebook Twitter Copy URL
Copied
(UPDATED) 'There are things in life that would move a man, a citizen, to do something even if he doesn't enjoy it,' says the Davao City mayor

MANILA, Philippines (UPDATED) – Davao City Mayor Rodrigo Duterte has confirmed that he will run for president of the Philippines in the 2016 elections.

“Yes, I am running,” he told Rappler during a phone interview on Saturday, November 21. Duterte was then in a party in Cavite where he told guests he has decided to gun for the presidency.

What prompted him to say “yes” after saying several times he wouldn’t run? The Senate tribunal decision thumbing down the disqualification case against Senator Grace Poe’s presidential bid.

Duterte believes that Poe, being a foundling, is not a natural-born citizen and is thus not qualified to seek the highest post in the land.

The decision of the tribunal, he said, “cheapens the Constitution, the only thing that holds the country together.”

Asked about the factors he had once enumerated as reasons he could not run – opposition of his family, his old age, his lack of enthusiasm for the job – he said, “There are things in life that would move a man, a citizen, to do something even if he doesn’t enjoy it.”

He is now waiting for an opportunity to talk to the leadership of PDP-Laban (Partido Demokratiko Pilipino-Lakas ng Bayan), the political party that offered the slot of their previous presidential candidate who had withdrawn his candidacy.

He said he would consult, in particular, PDP-Laban president Senator Aquilino “Koko” Pimentel III on the “desired date for filing my certificate of candidacy.”

Only after he secures their blessing will he make a “formal” declaration.

PDP-Laban national chairman Mike Sueno told Rappler in a text message, “We will gladly give him our blessing.”

Duterte also said he is hoping his daughter, Sara Duterte, would be willing to run for Davao City mayor in his stead.

‘A matter of principle’

Duterte’s intention to run for president is anchored on his refusal to accept “an American president” of the Philippines, something he thinks is a distinct possibility if Poe manages to win the elections. (READ: American president? Poe camp reacts to Duterte)

“I’m terribly disappointed. Pwede pala maski hindi natural born (Even someone who is not a natural born citizen can run). I’ve been warning to everybody, I said I am not interested, it does not appeal to me and I do not have a need for it. Pero ‘pag ganito ang laro ng ating bayan (But if this is how the game is played in our country), then the option to run is on the table,” he said during a doctors’ forum in Iloilo City earlier that day.

Duterte reasoned that while the United Nations Convention on the Reduction of Statelessness declares that foundlings are to be “deemed citizens,” it stops short of declaring the foundling a natural-born citizen, one of the requirements for being the president of the Philippines.

If future jurisprudence were to look at the recent SET decision, it would mean even naturalized citizens can run for president, reasoned Duterte.

“Why is [the requirement] exacting? it is exacting because of the presidency,” he said during the forum, adding that he believed the presidency is “sacred.”

(I have nothing against Grace. But give me an Ifugao, Badjao. Give me a plumber, a carpenter, or an accountant as long as they are Filipino. Don’t give me someone who is not Filipino.)

Visibly distressed, he recalled reports that Poe had used her American passport during trips abroad.

“There is a central rule by the Supreme Court which says when you use an alien passport thereby representing you to be a citizen of another country, you have renounced the Philippine citizenship. Why is it not followed? Eh kung ganoon, kanya-kanya na tayo (If that is the case, let’s just go our own separate ways),” he said.

He had disappointed supporters by not filing his candidacy for president but a Commission on Elections policy on substitution allows him to take the slot of a withdrawn candidate from the PDP-Laban party.

Duterte went on to elaborate on what he would do for the country if he is elected, something he had done often even when he had said he was out of the race.

“Pagka dumating ako diyan, presidente, then you can be very sure I will not sit there at ipupusta ko ang buhay ko pati kulong ko, and everything and even go to jail after. Hindi ako dadaan sa presidency na walang mangyari. Kailangan may mangyari o ayaw ko; that’s the deal.”

(When I get to the presidency, then you can be very sure I will not sit there and bet with my life, even go to jail after – I won’t go through the presidency without anything happening. Something has to happen or I don’t want it; that’s the deal.)

Among the specific things he would do? Put up a railway system along the Pasig River, the only thoroughfare in Metro Manila that did not suffer from conflicting rights of way. (WATCH: Duterte, his 6 contradictions and planned dictatorship)

A nod to supporters of the Freedom of Information Act, he said he would “open all the books” and be “transparent with everything.”

Though he “can’t give heaven,” he promised “a comfortable country” for everyone.

“You can go out at night and you don’t have to worry about your children,” Duterte said.

About Metro Manila traffic, he said the root problem was the unchecked purchasing of cars. As for airport infrastructure, the main challenge was the number of airplanes approaching Metro Manila airports despite the lack of runways to accommodate all the traffic.

Alongside his vision of a better Philippines, he warned that if his efforts to improve the country were to be blocked by a corrupt Congress, he would “declare a revolutionary government” and “close down Congress.”

“Because I have to solve so many problems, stop fucking me….If you want me to do it, then I’ll do it but in my way,” he said. – Rappler.com