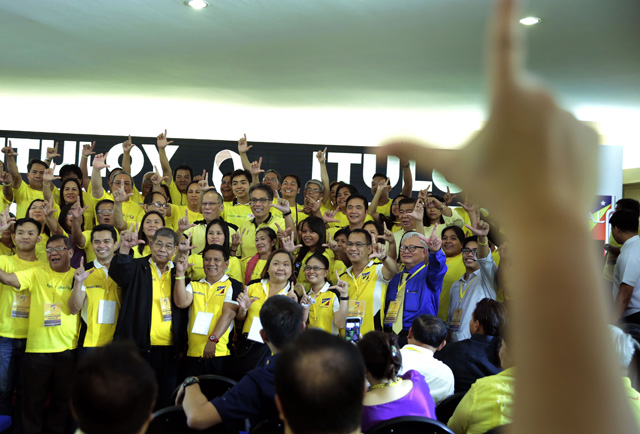 At the same time, however, Erice said that party members planning to support other candidates should just leave.

(I call on our LP members: if you’re supporting other candidates, it’s time you leave the party because one of our oaths is to make sure our candidates win.)

The LP has Manuel Roxas II as its standard-bearer and Camarines Sur Representative Leni Robredo as its vice presidential bet. Its 12-person line-up, meanwhile, is composed of 6 party members and 6 allies of the ruling party.

All out for Duterte?

A handful of LP allies in Mindanao have talked about the likelihood of changing allegiances now that the Davao mayor finally decided to gun for the highest elective post. Duterte is the only presidential aspirant from Mindanao in a race of at least 5 leading candidates. (READ: LP defections for Duterte? ‘That’s how democracy works,’ says Roxas)

Both Roxas and Erice, in separate interviews, said none of the LP members in Mindanao have expressed to them plans of jumping ship.

(It’s just political propaganda. Unlike them, whose members can be counted using your fingers, we in the LP will have a difficult time because we have thousands of members.)

The LP is the country’s ruling party. President Benigno Aquino III is the chairman of the party.

Pundits have speculated that a Duterte candidacy would affect Roxas’ numbers the most. Duterte is the strongest presidential bet in Mindanao, based on recent surveys, and is also supposedly strong in Metro Manila, if a privately-commissioned survey is to be believed.

Roxas, meanwhile, is weak in Mindanao according to latest surveys but is the leading candidate in the Visayas. The LP standard-bearer traces his roots to two provinces in the area – Capiz on his father’s side and Negros Occidental on his mother’s side. (READ: Roxas’ pitch to mayors in Iloilo: I’ll give you a Visayas president)

But while Duterte has been Davao mayor for over two decades, he traces his roots to Maasin, Southern Leyte.

Duterte did not file his Certificate of Candidacy (COC) for president during the week the Commission on Elections (Comelec) set for its filing. Instead, back in October, he filed his COC as re-electionist mayor of Davao.

The Davao mayor intends on being the substitute candidate for PDP-Laban standard-bearer Martin Diño, who has since withdrawn his candidacy. The validity of Diño’s candidacy is also being questioned.

Erice also criticized Duterte’s peace and order track record  as “hyped,” saying that if the country’s crime index in 2014 is to be made as basis, Davao was the 4th highest when it came to reported crime incidents.

Davao has a population of over 1.5 million, according to the latest government data while Quezon City, which had the most reported crime incidents, has over 2.8 million residents. According to data presented by Erice, Davao recorded over 18,000 crime incidents in 2014.

Caloocan has roughly the same population as Davao.

“Bakit naman kailangan i-point out ito? Ngayon lang siguro kailangan pag-usapan dahil gusto maging pangulo eh at sinasabi niya na isa sa kanyang number one advocacy ay crime solution,” said Erice when asked why this data did not become public earlier. (Why do we need to point this out? Now might be a good time to talk about it because he wants to be president and he’s saying that his number one advocacy is crime solution.) – Rappler.com