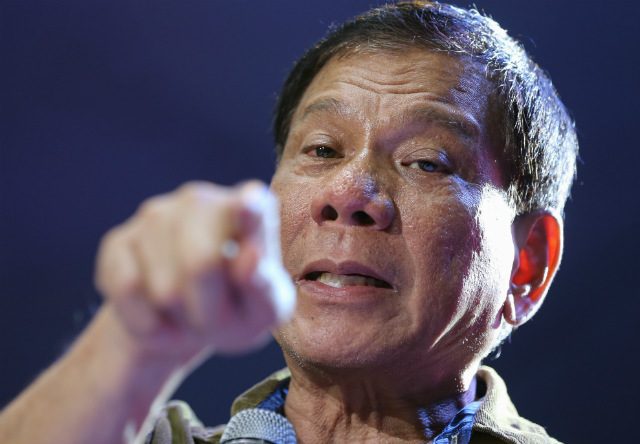 The rights group spoke out as a survey was released showing the frontrunner for the 2016 poll was a mayor dubbed “Dirty Harry” who has openly boasted of personally killing criminals. (READ: Duterte tops SWS poll before cursing Pope)

Amnesty International (AI) Philippines said it asked the five leading presidential hopefuls to give them a copy of their human rights agenda but none complied, despite repeated requests.

“Unfortunately, this challenge has not been accepted as Amnesty International Philippines has yet to receive word from the offices of presidential candidates regarding their human rights platform,” the rights group said.

A survey released Monday by the respected Social Weather Stations group revealed Duterte, the longtime mayor of Davao, leads his rivals in the race to succeed Aquino.

In a report earlier this year, Human Rights Watch said Duterte’s so-called “Davao Death Squad” had killed more than 1,000 people during his tenure as mayor of the city on the southern island of Mindanao. (READ: Duterte: ‘Am I the death squad? True’)

AI Philippines campaign coordinator Wilnor Papa said his group has long called for an investigation of Duterte but “the government seems to look the other way”.

He said the popularity of Duterte and his anti-crime message should not detract from the need to promote human rights.

“We do understand where the Filipino people are coming from… but we don’t believe that to get peace and order, you need extra-judicial executions, you don’t need short cuts (to due process),” he said.

AI Philippines also rated Aquino, who ends his six-year term next year, poorly, saying he had made little progress in ending extra-judicial killings, reining in the police and military and stopping torture by the security services.

Papa said that in the run-up to the May elections, AI Philippines would also “make sure our voices are heard, to show that human rights is not something that can be ignored”.

Critics say the Philippines has long suffered from a “culture of impunity” where powerful figures feel they can get away with murder. – Rappler.com