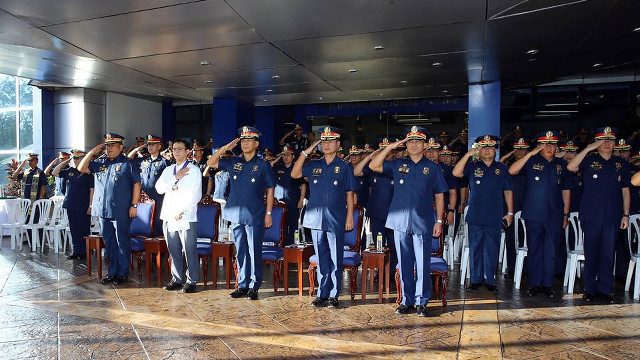 MANILA, Philippines – The tandem of Rodrigo Duterte and Alan Peter Cayetano promises to improve the justice system, and not resort to extrajudicial killing, to eliminate crime and corruption, the vice presidential candidate said.

Central to their plan is the increase of salaries of policemen to P75,000 to P100,000 each within 3 years, Cayetano said at a press conference in Taguig City on Monday, January 4.

“There is no extrajudicial killing in our platform. There is only a firm, fair, and fearless application of the law,” said Cayetano, who is Duterte’s running mate.

The latest political tandem to emerge, the Davao City mayor and the senator from Taguig City are running on a platform centered on fighting crime and corruption.

According to the government’s compensation scheme for uniformed personnel, the lowest rank of police officer (Police Officer I) earns only P14,834 ($315) in monthly base pay. The lowest sum promised by Duterte and Cayetano, P75,000, is 5 times that amount.

Thus, if the tandem were to fulfill their promise, the lowest ranking police officer would earn more than what the chief of the Philippine National Police (PNP) is earning today.

The sum was proposed by Duterte himself in talks with Cayetano. Duterte’s camp confirmed with Rappler that the platform that Cayetano presented was discussed with Duterte. 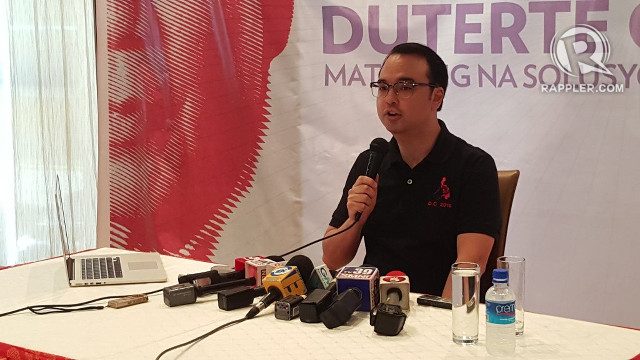 The increase in salaries for police officers is often mentioned by Duterte in speeches. He has previously said he would increase their salaries by 3 or 5 times if he were president. He has said the same about soldiers.

The police, whom Duterte has called the frontliners of the justice system, should be adequately compensated to ensure an effective campaign against criminals. (READ: Duterte vows peace in 3-6 months if elected president)

The “lowly” wages currently being paid to police officers make it easier for police to be swayed to work with criminals who are able to offer princely sums in bribes, said Cayetano.

Where to get the money?

A look at the government’s 2016 national expenditure program shows that PNP budget for personal services (or staff salaries) was P99 billion in 2014 and P60.6 billion in 2015.

The proposed police salary budgets exceed even the total PNP budgets of 2014 and 2015 – P109 billion and P71 billion, respectively.

To fulfill this campaign promise, and assuming the entire national budget stays at P3 trillion (like the 2016 national budget), the government would spend 4-6% of the country’s budget on police salaries.

Where would they get the money?

Cayetano said that the cost of upgrading salaries of law enforcers would not require additional taxation by government, based on his number-crunching.

“Even if our objective is to double [their salaries], it’s P150 billion. The budget went from just over a trillion pesos when President Aquino took over to P3 trillion. So just the normal increase of revenues every year, which is P150 to P200 billion, can already cover the increases [in police salaries] for 2017,” he said.

This could also be done by limiting infrastructure development and improvement to only a few key projects, he said.

“For every one peso collected, two pesos is not collected. So if out of the P3 trillion, almost P2 trillion is taxes, under the World Bank study, we can collect P6 trillion. But P4 trillion goes to corruption,” he said.

Investing in the police force would show a return in several ways, said Cayetano.

Cayetano said he and Duterte would also bring back special criminal courts similar to those instituted during the time of President Fidel Ramos.

“It’s continuous trial, eliminating postponements. Because part of why criminal cases take so long is the witness and even police are neutralized,” explained Cayetano.

These criminal courts would prevent cases from dragging on too long and would instill fear in criminals who will no longer have time on their side.

Part of their platform is the modernization of the Philippine National Police. Cayetano said there should be modern crime laboratories in each region, improved training for investigators, and state-of-the-art crime-fighting equipment.

Davao City, under Duterte, already enjoys a modern crime response center and is one of only 3 areas in the world to have an Integrated Emergency Response System 911 that works and brings help within minutes.

Yet Duterte continues to face criticism for his statements on killing criminals and drug lords. Duterte is known to support the return of the death penalty.

Cayetano came to Duterte’s defense, saying these controversial statements are being misunderstood by the public.

“We don’t want police to go wild shooting criminals…. The rules of engagement provide that if they train a gun at you or they don’t want to surrender, you can shoot them. Mayor Duterte is saying, if they fight, you have to protect yourself,” he said.

Duterte and Cayetano have both risen in recent election surveys. Duterte was tied with Grace Poe as second most popular presidential candidate in a December Pulse Asia poll.

Cayetano’s rating doubled, from 9% in September to 18% in December. He is in 3rd place among other vice presidential bets, tied with Liberal Party candidate Leni Robredo. – Rappler.com