Duterte: No ‘bloodless cleansing’ vs crime 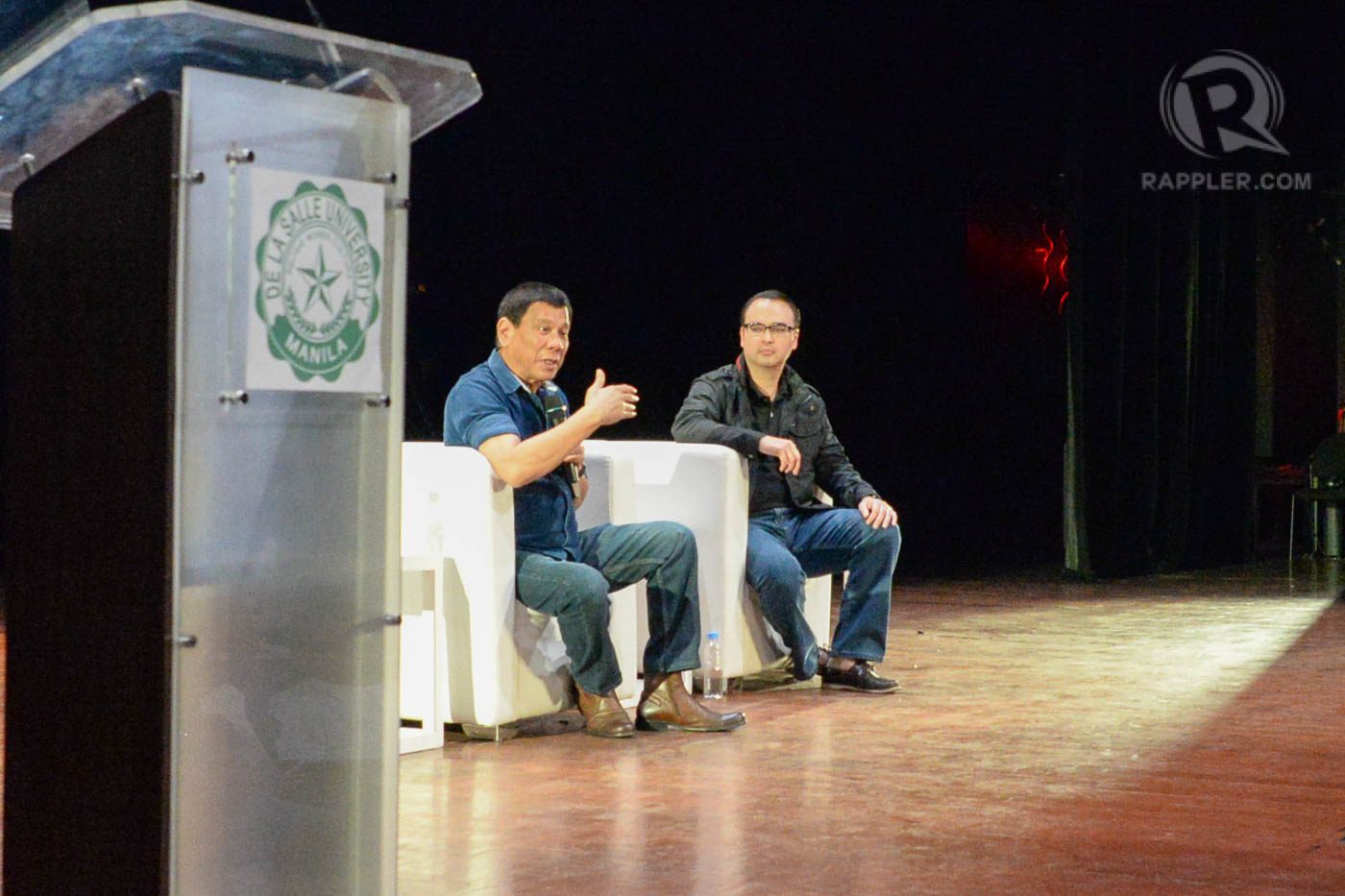 Facebook Twitter Copy URL
Copied
At 'The Leader I Want' forum, the presidential bet says it is unrealistic to believe that fighting criminals, who are likely backed by powerful people, would be bloodless and clean

MANILA, Philippines – When up against powerful criminal syndicates, there is no such thing as “bloodless cleansing,” said presidential aspirant Rodrigo Duterte during Rappler’s #TheLeaderIWant forum on Wednesday, January 20.

The mayor of Davao, who prides himself in his city’s peace and order program, was answering questions on allegedly ordering killings without due process. He denied committing human rights abuses. (READ: Duterte denounces extrajudicial killing: No honor in it)

“Hindi ko ginagawa ‘yan. Talian ko? Parang hindi ka naman lalaki kung patayin mo ‘yung taong nakatali sa likod,” he said during the forum at the De La Salle University, which the DZRH and Media Bayan networks also broadcast live. (I don’t do that. I’ll tie him up? You’re not a man if you kill a person who is tied up.)

He clarified that all the criminals he had ordered killed resisted arrest or threatened the lives of law enforcers.

“Lumalaban talaga because they’re paranoid. Almost invariably they have weapons, lethal weapons to fight it out,” he said, describing drug lords or members of drug syndicates.

“If I become president, there’s no such thing as bloodless cleansing. I propose to get rid of the drugs between 3 to 6 months,” he added. (READ: Duterte, Cayetano platform focuses on crime, economy)

Cayetano: President gave such order too

In a press conference after their speeches, vice-presidential candidate Alan Peter Cayetano backed up Duterte by pointing to the Aquino administration’s own “cleansing” of terrorism.

He said President Benigno Aquino III ordered the terrorist Marwan to be taken “dead or alive.”

“That’s why nobody knocked on doors and showed a warrant of arrest. What they’re accusing the mayor of was actually [the same one] ordered by the President. Why did we not hear from Human Rights Watch against the President?”

‘Rule in the outside world’

Members of the audience were given a chance to react to statements made by the two politicians.

A La Sallian student had this to say: “When Mayor Duterte was describing how bad it was in Davao, how these drug lords were actually carrying guns and threatening people…. From my perspective, okay so they’re not upholding the responsibility to respect other people’s lives so when they were killed, that means it wasn’t actually an abuse of human rights. So I think Mayor Duterte is just standing up for justice in his city.”

In the press conference, Duterte explained that it is not realistic to believe that fighting criminals, who are likely backed by powerful people, would be bloodless and clean.

“That ain’t the rule in the outside world. Others say there is speedy trial, due process. They think of a situation in their minds that would suit their words to their thinking. That’s the problem, if you cannot connect with reality,” he further explained himself during a press conference after the forum. – Rappler.com