Facebook Twitter Copy URL
Copied
Some have misgivings, however, about Duterte's promise to end crime, saying, 'It's easier said than done. How will he make sure policemen don't go overboard and just kill whoever they want?'

MANILA, Philippines – “As a businessman, we welcome him because of his unorthodox way of doing things against graft and corruption, [for] peace and order,” said a Filipino-Chinese businessman about Rodrigo Duterte.

“If he can do it in Davao, hopefully he can do it throughout the Philippines,” continued Dr Henry Lim Bon Liong after hearing Duterte’s speech in front of his organization on Tuesday, January 19.

Liong is the executive vice president of the Federation of Filipino-Chinese Chambers of Commerce and Industry Inc (FCCCII), one of the biggest nationwide groups representing the Filipino-Chinese community.

Many members of the group gave Duterte a standing ovation as he arrived in their headquarters in Binondo, Manila – home to the country’s oldest Chinese community, Manila’s Chinatown.

One officer couldn’t help but notice that never before had he seen “such an overflow in our hall.”

Filipino-Chinese businessmen and professionals of all ages sidled up to the mayor for photos. There was a lot of hand-shaking and exchanges of pro-Duterte baller bracelets.

When things quieted down a bit, Duterte was introduced to the group as “the man who gets things done.”

Duterte repeated his promise to end criminality, corruption, and the spread of drugs. He emphasized his firm belief that peace and order sets the stage for thriving businesses and investments – something close to the federation’s heart. (READ: Duterte to businessmen: Davao City is my Exhibit A)

Asked which election issue resonates the most with the group, its president Angel Yu said, “Peace and order.”

“Most of the Filipino-Chinese community are in business so if there is peace and order, there is business,” he said in a mix of English and Filipino.

For Yu and other members, Duterte is the presidential candidate who has proven he can make good on this promise.

(The evidence he made out of Davao, people are impressed because it was voted, I think, 5th safest city in the world. In peace and order, the mayor has no rival. He is really number one there.)

But more than protecting their businesses, Filipino-Chinese businessmen have a more personal reason for valuing politicians who make fighting crime their priority. 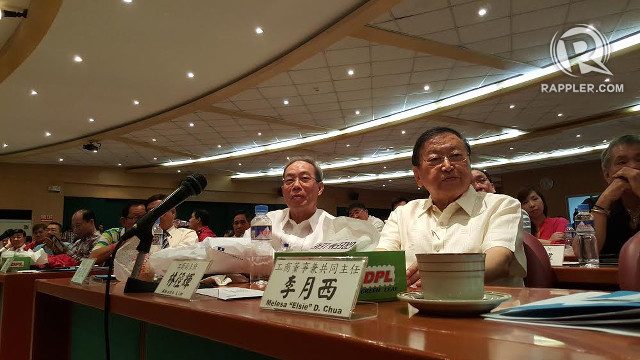 “The Filipino-Chinese community is scared. Are they going to stay or are they going to move out? That is the question. But later on, with Duterte coming out as mayor, he solved the kidnapping cases so these people feel safe so they support him,” said Yu.

In fact, a Filipino-Chinese woman’s firm belief in Duterte’s ability to help her eventually saved her from her kidnappers in 2013.

But a board member said he has misgivings about Duterte’s campaign promise to end crime and drugs in 3 to 6 months.

“It’s easier said than done. How will he make sure policemen don’t go overboard and just kill whoever they want?” he asked.

Duterte’s stance on China also impressed some federation members. Duterte believes in bilateral talks with China if the present international arbitration case the Philippines is pursuing ends in gridlock.

This means he believes the Philippines and China should talk one-on-one instead of involving other countries.

“Some of the politicians want it multilateral. That’s difficult. Why would Japan and Australia look out for our interests? It would make things complicated, for me. But if only two of us will talk, it’s easier,” said Yu.

Resolving the West Philippine Sea dispute would allow the two bickering countries to work together in other pressing issues.

“For thousands of years we’ve been neighbors, we’ve been on good terms. Relatively, the West Philippine Sea is a small issue. In business, we can sit down and talk then there are more areas we can open for cooperation,” Yu added.

Though many of FCCCII members, especially the Davao City chapter, support Duterte’s candidacy, Yu said their group is willing to hear out other candidates.

Asked about his assessment of other candidates, Yu said Liberal Party standard-bearer Manuel Roxas II would likely continue the programs of President Aquino.

“We appreciate what President Aquino is doing, We are improving every year, at the same time, our peso will stabilize,” he said.

But some in their camp believe it may not be enough to copy from Aquino.

“I think Mar Roxas will continue the programs of president Aquino but now people look at too many angles. Financially, it’s good. But there are also some who say, it’s not wrong, but it’s not enough,” said Yu. – Rappler.com