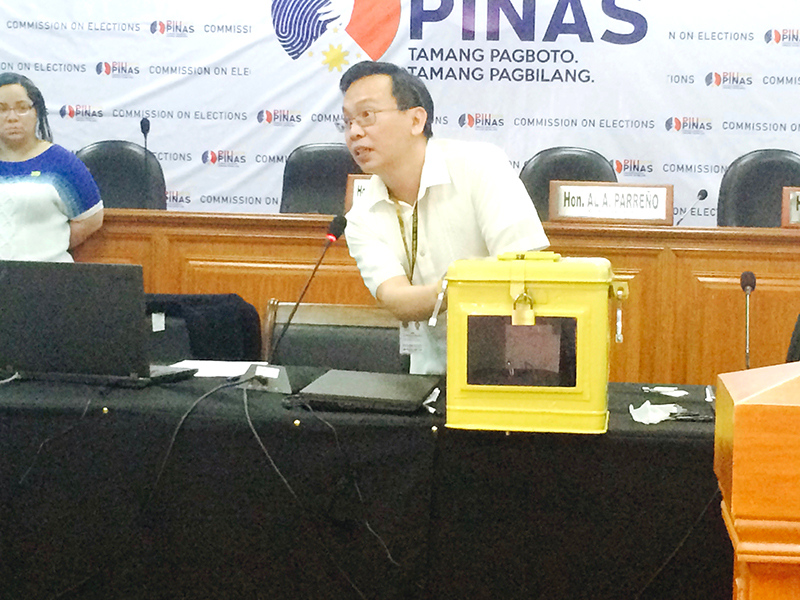 MANILA, Philippines (UPDATED) – The Commission on Elections (Comelec) on Tuesday, January 26, received the final version of the software that would manage the automation of the 2016 national elections.

The EMS software sets up the automation of the polls and manages election-related data. It also prepares all ballot templates for each town and city nationwide, and creates configuration files for the vote-counting machines. (READ: How does the PH automated election system work?)

The software and related files were saved in a thumb drive, then sealed and turned over to the Comelec. This was witnessed by representatives of political parties and local groups.

It was temporarily stored in a yellow ballot box and guarded overnight at the Comelec office in Intramuros, Manila.

On Wednesday morning, January 27, the poll body will deposit the thumb drive in escrow in a vault at the Bangko Sentral ng Pilipinas (BSP).

The Final Trusted Build (FTB) process converts the source code into binary or executable code that the computer can interpret and run, said the Comelec.

Hosting the FTB process on Tuesday was among the Comelec’s efforts to promote transparency in the country’s 3rd automated polls.

The FTB was conducted in a “trusted environment” by SLI Global Solutions, the international entity that will certify the source codes created by technology provider Smartmatic-Total Information Management (TIM). 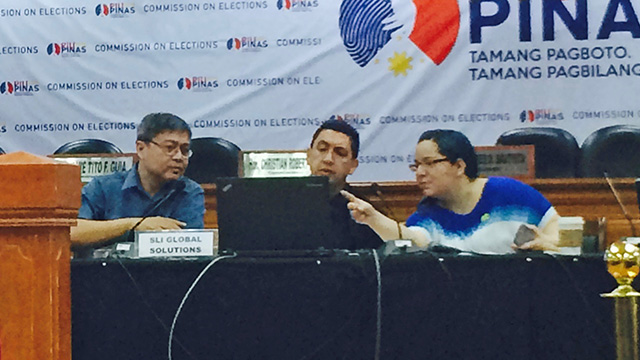 “Hash codes” of the EMS software will also be generated and released, so that the public could check if the source code had been tampered with.

“The hash code is the assurance that whatever has been tested will be the same for the machines that will be used for the elections,” explained Comelec Commissioner Christian Robert Lim.

The Final Trusted Build of the source codes for the vote-counting machines and the canvassing system to process the election results will take place on February 8.

Local code review yet to start

Meanwhile, IT consultant Lito Averia of the National Citizen’s Movement for Free Elections (Namfrel) questioned the conduct of the final trusted build activity, saying that the review by local groups and parties of the customized EMS source code was not yet finished.

Averia explained that there are two levels of the source code review: that of the base code, and of the customized code that will comply with election laws.

“In this case, the Trusted Build process is going ahead without the benefit of the local groups having reviewed the customized code…. To me, it does not build an assurance that they’re working on the same source code,” he continued.

In response, project manager Marlon Garcia of Smartmatic explained that time constraints – to meet a February 9 deadline for the issuance of a certification report – led to the decision to proceed with the trusted build, ahead of the completion of the customized code review.

Nevertheless, Peter Antonio Banzon, head of the technical evaluation committee, said that discrepancies found in the customized code review will be properly addressed and evaluated.

“The last thing we want is to have a non-trusted system being used for the elections,” he said. – Rappler.com