Feb 4, 2016 9:00 PM PHT
Patty Pasion
Facebook Twitter Copy URL
Copied
They vow to go to Marcos' sorties and 'not allow him to campaign without exposing their family's lies' 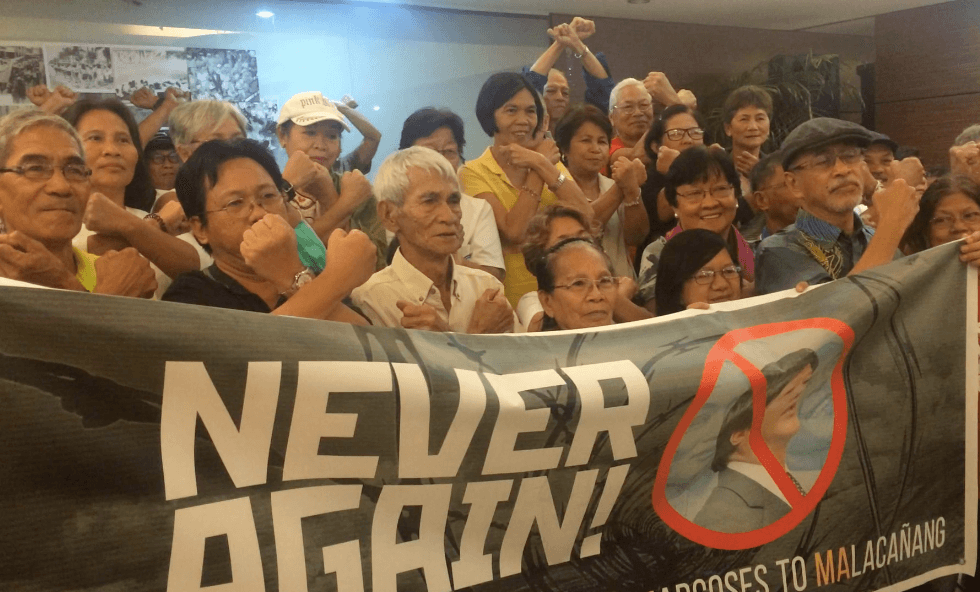 MANILA, Philippines – A coalition of martial law victims will be closely following the campaign activities of vice presidential bet Ferdinand “Bongbong” Marcos Jr to make sure they make noise and hopefully frustrate his bid to “return to Malacañang.”

Some of the victims of the dictatorial rule of Marcos’ father and namesake formed on Thursday, February 4, a coalition called “Campaign Against the Return of the Marcoses to Malacañang,” aptly abbreviated as Carmma (karma). Karma is a Hindu concept of a person reaping the consequences of his actions.

Lead convener Bonifacio Ilagan of Selda said he and his fellow Martial Law victims fear that “the Marcos grand scheme to recapture Malacañang is just a stride away” with the younger Marcos being on top of pre-election polls.

Based on the last Social Weather Stations (SWS) survey in December, Marcos is statistically tied with poll front runner Senator Francis Escudero. Marcos got a voter preference of 25% while Escudero got 28%.

Carmma will be officially launched in Metro Manila on February 22, days ahead of the 30th anniversary of the People Power Revolution that falls on the 25th.

(Our fellow victims from Mindanao, the Visayas, and different regions of Luzon will be attendance. On February 25, Carmma will join the commemoration of the EDSA People uprising.)

Victims of human rights violations during the Marcos dictatorship vowed to “hound Bongbong Marcos wherever he goes.”

They are set to use traditional and non-traditional media to capture as much attention from the voting public. Ilagan said they will print their group’s manifesto in full page advertisements in broadsheets during the campaign kickoff on Tuesday, February 9. They also plan to hold concerts and plays to deliver their message.

Present at the Carmma meeting on Thursday was television director Bibeth Orteza. She suggested the use of images, videos, and the social media to engage the youth voters, who are mostly naive about what happened in the 1970s.

Asked whether they are endorsing any of Marcos’ contenders in the race, activist and University of the Philippines professor Dr Judy Taguiwalo clarified that Carmma members are free to vote for anyone except Marcos.

(Our unity is only in statements, manifestos, and plans. We are not partisan for any particular vice presidential [candidate] as a group.)

The movement also said that even if they are in need of donations, they will not accept cash from politically-motivated entities. – Rappler.com