STA. ROSA, Laguna — For the first time, the Commission on Elections (Comelec) opens to the public its warehouse for the vote-counting machines to be used in the May polls.

The 5-hectare hub is being leased by bus operator JAM Liner to the Comelec for about P69 million a year.

The facility is wide, well-ventilated, and, as per Comelec Chairman Andres Bautista, free from any security threats for now. 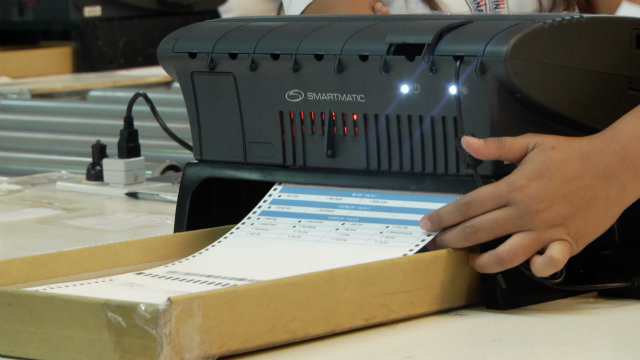 This 5-hectare facility in Santa Rosa, Laguna is playing a crucial role in the run-up to the 2016 elections.

For a price of about P69 million a year, the Commission on Elections is leasing this compound from bus operator JAM Liner to test and store the 97,000 vote-counting machines or VCMs that will be used on May 9, election day.

Inside is the main production facility, where the VCMs and servers are tested, as well as two storage facilities for the VCMs.

Comelec chairman Andres Bautista says the Santa Rosa warehouse is much better compared to the old one in Cabuyao in terms of ventilation, security, and access to the area.

ANDRES BAUTISTA, COMELEC CHAIRMAN: One of the innovations of this warehouse as compared to the Cabuyao warehouse is the construction of the viewing deck. In the interest of transparency, we are open to groups coming over as long as they provide us notice. And you will see later the viewing deck where you can basically have a good view of everything that’s going on in respect of the warehouse. In fact, we want to invite students to go here on a field trip to show them what we are doing here so that they can also learn from what goes on in an election preparation.

As of February 4, technology provider Smartmatic delivered 90,000 VCMs in the country, with another 6,000 in transit from Taiwan. The Santa Rosa facility houses more than 70,000 VCMs, of which more than 60,000 were already tested.

But what exactly happens to the the VCMs once they are delivered here?

First, the machines are placed inside the storage facilities before they are subjected to the hardware acceptance test or HAT.

This test makes sure the VCMs are accurately scanning and interpreting the results of the ballots. Real ballot papers, but without the names of the official candidates, are used for the test.

If they pass, the VCMs are labelled then stored per clustered precinct, ready for delivery. If one fails, the machine will be labelled as under quarantine and will be repaired. In the meantime, a spare VCM from Smartmatic will take its place.

There is also a Memory Configuration Room inside the compound. It is accessible only to a limited number of Comelec and Smartmatic employees because it houses the servers for the election management system, which will manage the automated polls in May.

Security in the compound is tight, with security personnel from the Comelec Organic Security Force augmented by the police conducting security checks before entering the buildings.

While the Santa Rosa compound is easy to find because it is near a major highway, Bautista assures that it is safe from any security breach.

ANDRES BAUTISTA, COMELEC CHAIRMAN: What’s good here in terms of security is that the facility is near the inside area of the compound, so we can post people around it. The actual warehouse is far from the gate, so if the technology provider asks us in an extreme situation, we can got more PNP personnel and if necessary, the Armed Forces. If they need some tanks, if they want to propose some tanks, we can make arrangements as well. We don’t think security, at the moment, is a concern.

The 2016 elections is expected to be a tight race among candidates. The voting public is hoping that Comelec and Smartmatic would do all they can to ensure that the machines that would count their precious votes are clean and safe from election rigging.