Marcos best president if not for dictatorship – Duterte 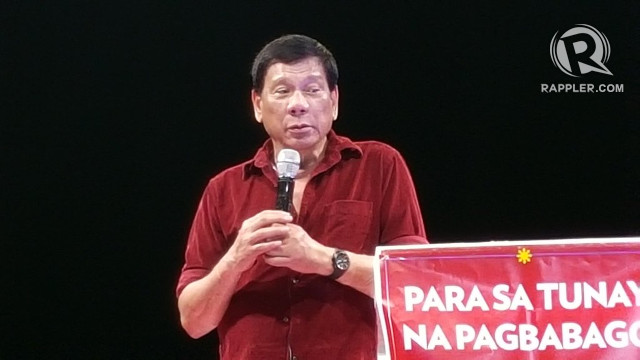 His statement was greeted by cheers from the crowd.

(The Biyayang Dagat and Masagana 99, that was the time when we didn’t import food.)

Biyaya ng Dagat was a program of the Marcos government that allowed small fisherfolk to take out loans. To help them pay back the loan, the program sought to widen the market for fish products and improve the fisheries sector as a whole.

The Masagana 99 program spread the use of a high-yielding rice variety developed by the International Rice Research Institute (IRRI). The goal was to increase the productivity of rice land in the country.

The program is credited for launching the Philippine Green Revolution, making the nation self-sufficient in rice and allowing it to export rice for the first time.

Duterte, who has said agriculture and food security will be among his priorities if elected, doesn’t mind borrowing ideas if they are good ones. (READ: Duterte, Cayetano platform focuses on crime, economy)

He said he is not like other politicians who try to reinvent the wheel so as not to be accused of copying.

His openness to lifting a page from Marcos’ book will likely reinforce comparisons between him and the former dictator.

Duterte’s strong-man type of leadership is credited for instilling discipline and order in Davao City.

Before deciding to run for president, he also told Rappler’s Maria Ressa that if corrupt politicians were to block his initiatives, he would declare a dictatorship.

But he has since clarified that he is a “hardliner” on crime and corruption but would “allow the people all their democratic freedom.”

His primary example of this is Davao City where he said people are disciplined but still enjoy privileges of a democratic society.

Duterte has been associated with Marcos in another way. Marcos’ only son, Senator Ferdinand “Bongbong” Marcos Jr, had offered to be Duterte’s running mate.

In fact, there are some who would rather see a Duterte-Marcos tandem elected.

Duterte’s statements come two weeks before the anniversary of the EDSA Revolution which toppled the Marcos dictatorship. – Rappler.com