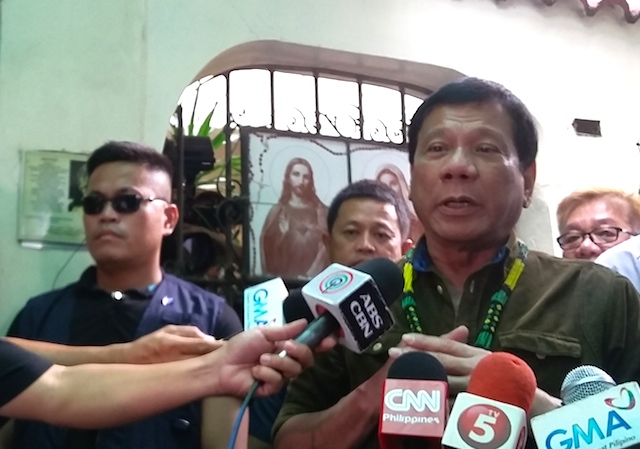 CAGAYAN,  Philippines –  In line with his campaign promise to end crime within the first 6 months of his presidency, Davao City Mayor Rodrigo Duterte said he will grant presidential pardon to law enforcers convicted of killing criminals and civilians in the line of duty.

The presidential candidate made the statement before a crowd of about a thousand people in Tuguegarao City on Wednesday, February 10, the second day of the campaign. He vowed to “take full responsibility” for deaths in the fight against crime under his term.

In discussing his anti-crime strategy, which has resonated with many Filipinos, Duterte said he will provide a “pre-signed form” to law enforcers, which assures the latter of a presidential pardon should they get prison terms for deaths during encounters with criminals.

“Kapag nagkapahirapan at gisahin ng Congress, ng Ombudsman, ang [Commission of} human rights ang mga pulis (When push comes to shove and Congress, the Ombudsman, the Commission on Human Rights grill policemen), there is a provision in the Constitution that the president can pardon the criminal whether conditional or full,” Duterte, a lawyer, said.

Duterte said he will direct policemen and the military to not be deterred in killing “all” criminals because it is his “personal order.” (READ: Duterte: No ‘bloodless cleansing’ vs crime)

“And if the Ombudsman and Human Rights Commission question them, I will tell them to just point their fingers at me,” he said to the cheering crowd.

The Davao mayor also said he himself will bail out the officers if they are slapped with lawsuits.

Duterte said this strategy will give law enforcers a sense of security when running after criminals. In return, people will feel more secure when roaming the streets.

He added: “It is the job of the administration to provide security to the people….So you can walk around…without the fear of being molested.”

During his 40-minute speech, the tough-talking mayor continued to chide the Aquino administration for its “failure” to curb crime.

He reiterated that his self-set target of 3 to 6 months to stamp out crime is meant to pressure himself to deliver on this promise.

As in previous public statements, Duterte said he would push for the restoration of the death penalty to deter crimes, if elected president.

The mayor has been both praised and criticized for his offered solution to ending crime.  (READ: Duterte: ‘Am I the death squad? True’)

Critics fear increased human rights violations of law enforcers under the presidency of Duterte, who has been accused of summary executions of criminals in Davao City. (WATCH: Rappler Talk: Human Rights Watch on Duterte and the death squads in Davao)

Duterte’s spokesperson, Peter Lavina, described Duterte’s decision to head to North Luzon, the “undisputed territory of an enemy,” as a “strategy taken right from the book of the Art of War.”

In the latest Pulse Asia Research, Incorporated survey conducted from January 24 to 28, Duterte was weakest in the Balance of Luzon – which includes Northern Luzon – getting only 8% of votes if elections were held during the survey period. Senator Grace Poe topped other candidates in the area, followed by Vice President Jejomar Binay.

“Duterte is heading to where others least expect him to….Going to Nothern Luzon is crucial because it is where Duterte is least known and it is definitely the farthest to witness the flourishing of Davao,” Lavina said.

He said Duterte is “determined” to prick Binay’s influence in Northern Luzon.

Cagayan Valley is known to be the bailiwick of Binay. His mother is from Isabela province. – Rappler.com