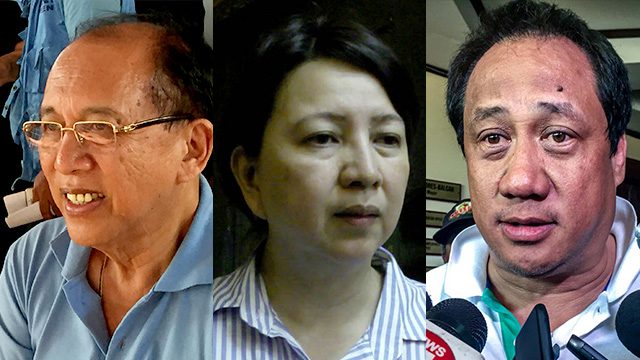 “There is no formal proclamation yet, but minus the formal proclamation, the marching order of the former president is to help the Vice President,” former Quezon Representative Danilo Suarez told Rappler on the sidelines of the United Nationalist Alliance standard-bearer’s sortie in Arayat, Pampanga, on Sunday, March 6.

Suarez is co-chairman of Lakas-Christian Muslim Democrats (Lakas-CMD), the political party of Arroyo. He is one of the advisers in the Binay campaign associated with the former president. (READ: Who are the people behind Team Jejomar Binay?)

Arroyo is under hospital arrest for plunder charges over the alleged misuse of  Philippine Charity Sweepstakes Office funds while she was president. She is suffering from multilevel cervical spondylosis or the weakening of the bones.

Last year, Arroyo asked the anti-graft court Sandiganbayan to allow her to be placed under house arrest in her La Vista residence or in Pampanga, which was backed by the House of Representatives. The Ombudsman has opposed the move.

According to Suarez, Binay’s expression of concern for Arroyo’s health has “reverberated” with voters in the province.

Binay and Arroyo used to be political foes – he was among Arroyo’s staunchest critics over corruption scandals and allegations of election fraud in 2004. Binay was the campaign manager of the late actor Fernando Poe Jr, whose daughter, Senator Grace poe, is a top contender in the 2016 presidential race.

Binay had also accused Arroyo of orchestrating his suspension for graft allegations when he was Makati mayor in 2006.

Former Candaba mayor Jerry Pelayo said this won’t happen to Binay in the May polls as there is stronger support for him in the province.

(Here in Pampanga, the incumbent and former mayors who are rivals in the elections all agreed they would support Binay. They can do whatever they want in the local elections, but all are well represented here, including the 22 municipalities and 3 cities. They all sent a delegation which means in Pampanga, Binay is their idol.)

Former Zambales representative Mitos Magsaysay, another Arroyo ally, also told Rappler that voters in Zambales and the rest of Central Luzon favor Binay’s programs, particularly promises of free healthcare and education, scrapping income tax for workers earning P30,000 and below, and the expansion of the Pantawid Pamilyang Pilipino Program (4Ps).

Some 4,000 regional, provincial, and municipal leaders from Aurora, Bataan, Bulacan, Nueva Ecija, Pampanga, Tarlac, and Zambales took their oath as members of the group.

Honasan is at the bottom of surveys on vice presidential bets. Among UNA’s exclusive senatorial candidates, only Sarangani Representative and boxing icon Manny Pacquaio is currently among the probable winners.

“I helped organize Senator [Grace] Poe and Chiz [Escudero] rally last
week. I also welcomed [Davao Mayor Rodrigo] Duterte’s visit to city hall last February
and I will welcome Vice President Binay’s visit to Angeles today and helped
him in his sorties last year in the city’s Pampang market and SM City
Clark,” he said in a text message to Rappler on Monday.

“This morning, Senator Ping Lacson was with me at the city hall and Isko
Moreno and [Roman] Romulo last month.. I welcome all national candidates in Angeles. Si Mar Roxas lang and ‘di pa dumadaan sa city hall (Only Mar Roxas is yet to visit city hall)…That’s the whole story,” Pamintuan added. – with reports from Jun Malig/Rappler.com