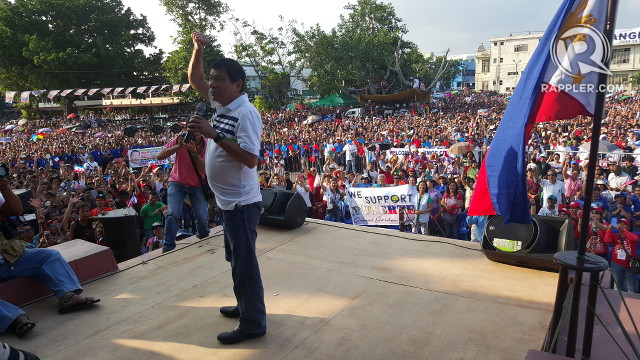 As a reporter covering Rodrigo Duterte’s campaign, I’ve listened to a good number of his speeches. I’ve heard him speak in front of businessmen in Makati, urban poor in Valenzuela, and Super Typhoon Yolanda victims in Tacloban.

I’ve listened to enough of his speeches to know his next punchline and anticipate an audience reaction, whether it’s laughter at his joke about a rival presidential candidate, roars of approval at his rants against corruption, or attentive (sometimes bored) silence when he begins his history lesson on Ferdinand Magellan bringing Catholicism to Mindanao.

I know that, in front of a youthful audience (say students in a presidential forum), he’ll joke about his contempt for the “selfie” phenomenon, whereas if it’s an urban or rural poor crowd, he’ll pick a pretty lady and ask her where her mother is (presumably to ask permission to take his new crush to Davao City).

Duterte’s speeches are fascinating. Usually around an hour long, they are impromptu because he does not read from any notes but are also in a way rehearsed because of the number of times he has given the same speech.

And no matter the audience, it is the same speech. It follows a rough outline: his fight against crime, drugs, and corruption. 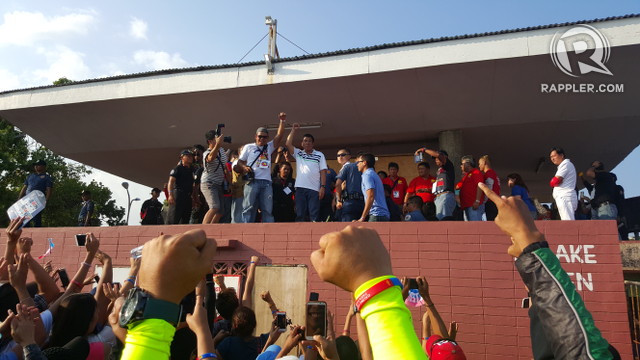 He inserts certain jokes or remarks to fit his audience. In front of an affluent crowd or students, he will speak mostly in English. When speaking to the impoverished, he speaks Taglish or Bisaya. He always curses, but he curses more when speaking to the masses. Believe it or not, it’s his cursing that never fails to generate laughter even in formal, upscale settings.

He uses props, like the Philippine flag or photos of a mining site in Agusan del Norte. He is adept at onomatopoeia (clucking sounds stand for gunshots) and impersonation (former justice secretary and now senatorial candidate Leila de Lima is the usual victim).

Depending on the province or region, he’ll mention any link he has with his audience: in Laoag City, he said his son-in-law is Ilocano, while in Cebu he said his father is Bisaya.

Duterte knows how to endear himself to an audience. Even businessmen who aren’t sold on Duterte admit he cracks them up. Old, young, rich, poor, Pangasinense, Leyteño, Manileño find it hard not to chuckle at least once when listening to him.

Duterte’s speeches are also his way of explaining himself. Unhampered by time constraints, Duterte goes on an all-out gab spree to impart his governance philosophy and platform, complete with plenty of diversions and wise-cracks.

Any voter seeking to understand Duterte should listen to at least two full speeches (scroll to the end of the article for 3 complete videos).

My contribution to this endeavor is this dissection of his speech. Here are 12 elements that he never fails to mention in any speech.

1. He is a socialist at heart.

“I would be, God willing, the first president coming from the Left. Ako po, Bayan, and I have been Bayan for the many years I have been mayor. I am not a member of the Communist Party of the Philippines. We follow the path of socialism. But itong extremism is not good for me. Ang pagka-socialist ko ay left of center, ito lang ‘yan sa kili-kili, huwag kayong matakot. Pero my dimensions in life, anak lang ako ng mahirap.” (Los Baños, March 11, 2016)

(Translation: I would be, God willing, the first president coming from the Left. I am Bayan, and I have been Bayan for the many years I have been mayor. I am not a member of the Communist Party of the Philippines. We follow the path of socialism. But this extremism is not good for me. My being a socialist is left of center, only up to here in the armpit, don’t be scared. But my dimensions in life, I am only a poor man’s son.)

2. He is angry at government for oppressing the people.

“I’m really disgusted the way government is being run because it is oppressing the people.” (Los Baños, March 11, 2016)

To illustrate his point, he will usually point out how the government has allowed the tanim-bala (bullet-planting) scam to victimize Overseas Filipino Workers or how the Aquino government vetoed the P2,000-pension hike when Social Security System consultants were given huge bonuses.

“Dito sa drugs, this has to stop. It is rampaging all around the country and they have graduated from the urban areas to the rural areas. May mga lugar dito sa Pilipinas, Visayas, and even Mindanao, na they have penetrated the market of the rural folks and hanggang ngayon ang pinagbabayad sa kanila, carabao, kambing, manok, itlog.” (Los Baños, March 11, 2016)

(Translation: As to drugs, this has to stop. It is rampaging all around the country and [druglords] have graduated from the urban areas to the rural areas. There are some places in the Philippines – Visayas, and even Mindanao – where they have penetrated the market of the rural folks and until now, they are asking for payment in the form of carabaos, goats, chickens, eggs.)

4. For the corrupt, obedience to the law is optional.

“In the Philippines today, corruption has really eaten into every facet of governance. Here in the Philippines, those who deal in corruption and crime, it’s always, obedience to the law is optional. Up here, you have the corrupt who are tax-exempt, the rich who think the Filipno is stupid. Down here, you have the low-lives – kidnappers, druglords, thieves. The ordinary people are caught in the middle – the people who don’t know any general, mayor, or governor.” (Los Baños, March 11, 2016)

Duterte: We in Visayas, Mindanao, you in Ilocos, we are given corrupt, stupid leaders who spend gov't money #PHVote pic.twitter.com/fABLsf4tZo

5. His promise to suppress crime and corruption in 3 to 6 months.

(Translation: They say that’s too ambitious. My God, try me. That’s what I told the Davao criminals before. I had them called out, ‘Do you want to go out of the city? Do you want to go to Manila? Life is good there. Just go there, you want?’ Those who didn’t believe me are dead. What do we have to talk about?)

6. He will use the police, military to crack down on drug lords.

“Ang sabi ko sa military pati police (I told the military and police), only criminals, drug-related offenses, I will tell the police and military, ‘Go out and kill them.’ Period. Before you become a police, you have the situations where you can really kill. Of course, in the enforcement of the law, because it is really to overcome the resistance and if you find yourself in jeopardy of losing your life, shoot…Ako bahala (I will take care of it). Basta (Just) follow my orders and do it in accordance with the book. Huwag kayo lumabas doon (Don’t go beyond what the book says). No abuses. I have the best police force in the entire Philippines, talagang (really) behaved.” (Los Baños, March 11, 2016)

7. The police, military will do their jobs because he will double their salaries.

(Translation: If you really want me to be president, this year, after elections, the salaries of the police and military will be doubled…Then they will be given rice so they have something to eat every day. Their children will have free education from kindergarten to high school, only in public school. When they die in the line of duty, they will receive 3 years’ worth of salaries…Now, if I double their salaries and they still ask for bribes [makes clucking sound to indicate gunshots].)

8. Allegations of his human rights violations are yet to be proven.

“[Leila de Lima] was the chairman of the Commission on Human rights. She was yacking for 3 years, why didn’t she file a case against me?” (Los Baños, March 11, 2016)

Duterte also never fails to remind his audience that it was under De Lima’s watch as justice secretary that criminals in Bilibid prison were found to be living the high life while incarcerated.

9. He has pro-poor programs.

“Ospital ng mayaman o mahirap (Hospitals whether for rich or poor), they will be required to put up a 10- or 20-bed facility sa mga taong hindi makabayad (for patients who can’t pay)…Kung mayaman ang ospital (If it’s a rich hospital) I will require 30 to 50 beds. Pagamot mo ‘yan, ako ang magbayad (Treat the patient, I will pay).” (Dagupan City, March 2, 2016)

He usually promotes his pro-poor platform when facing a low-income audience. Other programs he will mention: his continuation of the Pantawid Pamilyang Pilipino Program (4Ps) and his provision of a P1-billion fund per region to loan to promising small and medium enterprises.

10. His understanding of the roots of the Muslim Mindanao crisis.

“When he said, ‘I will call all these people here Filipinos,’ what do you think was the reaction of the Moro peoples? So they fought and until now, they are fighting for their real identity…That is the problem of Mindanao which many do not understand. They are angry because the land of Mindanao, not even a small piece was given to them. All the logging concessions were mostly American, and now Filipino and Chinese businessmen. All the big pineapple plantations, banana plantations, multinationals. They keep on fighting and the poorest region is ARMM.” (Los Baños, March 11, 2016)

11. His appeal for equal treatment of all regions in the face of Manila-centrism.

“Alam mo tayo, magkaiba ang tribo. May Tausug, Maranao, Tagalog, Bicolano, Ilocano. Alam mo magkaiba-iba ang dialect natin, magkaiba-iba ang kultura, even the idiosyncracies. But now what remains to hold us together is itong Philippine flag. The written manifestation of the flag is the Constitution. I hope that everybody would remain loyal to that flag kasi pag hindi, you start to fuck it, gagamitin niyo ‘yung pera at hayaan ninyo kami in our poverty there, ni wala kaming enough resources after giving all our money to you and you send us pittance at magulo, you leave to us a serious problem of maybe a fractured island.” (Los Baños, March 11, 2016)

(Translation: You know, we are from different tribes. There are Tausug, Maranao, Tagalog, Bicolano, Ilocano. You know, our dialects are different, so is our culture, even our idiosyncracies. But now what remains to hold us together is this Philippine flag. The written manifestation of the flag is the Constitution. I hope that everybody would remain loyal to that flag because if not, if you start to fuck it, you steal the money and let us live in our poverty there, we don’t even have enough resources after we give you all our money and you send us a pittance and things are messy, you leave to us a serious problem of maybe a fractured island.)

He often uses this rhetoric to justify why a shift to a federal form of government is necessary. Federalism would allow regions to retain most of their income instead of sending most of it to the national government in Metro Manila.

12. Jokes about his rival presidential candidates.

Duterte rarely jokes about female presidential bets Grace Poe and Miriam Defensor-Santiago. The only time he did poke fun at Poe was to say she will surely win because everyone mentions her in their prayers (“Hail Mary full of grace…”).

Here are 3 compete videos of Duterte’s speeches in front of various audiences.

In front of the urban poor of Tondo, Manila during his proclamation rally on February 9, 2016:

In front of wealthy businessmen in Makati on January 14, 2016:

Duterte speaks to businessmen in Makati at the Rotary Club of Manila. #PHVote