MANILA, Philippines – Senators Francis Escudero and Ferdinand Marcos Jr are “statistically tied” for the vice presidential race in the latest poll of The Standard conducted by Laylo Research Strategies.

Conducted from March 26 to April 1, the survey covered 3,000 “likely voters” or those registered with biometrics, and sure to vote in the May 2016 elections. The poll spanned 79 provinces, 40 highly urbanized cities, including 17 cities in the National Capital Region. It had a nationwide error margin of ±1.8%.

After Robredo on the 3rd spot, Senator Alan Peter Cayetano followed with 15%, Antonio Trillanes IV with 5%, and Gringo Honasan with 3%. 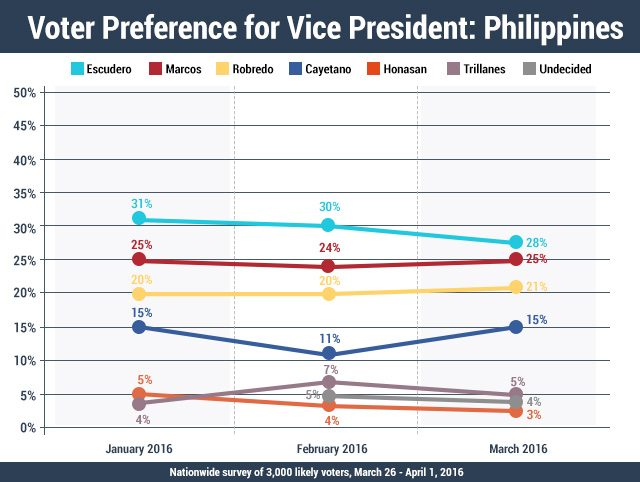 The third in a series of surveys , the latest poll shows Escudero on a gradual downward trend. From 31% in January 2016, he dropped to 30% in February 2016 and dropped yet again to 28% in this latest poll. (READ: Chiz still top choice for VP, Cayetano drops)

Marcos improved over his previous 24% (a slight drop from the earlier 25% of January 2016), as did Robredo who did slightly better than her previous 20%.

Cayetano gained the most among the vice presidential candidates, rising 4 percentage points from his 11% in February 2016. He regained what he lost in that poll, reclaiming the 15% preferential rating he had in January.