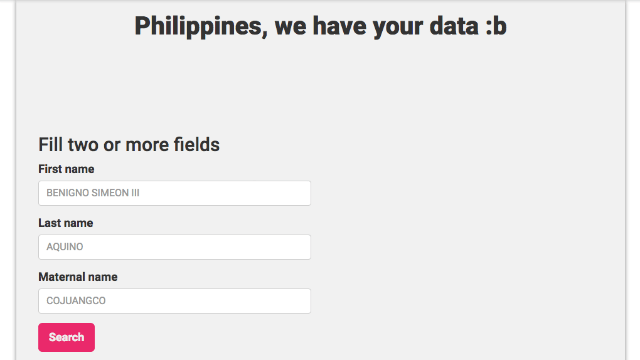 Facebook Twitter Copy URL
Copied
Netizens express shock and anger after finding out that their birthdays, addresses, and passport info, among others, have been exposed

MANILA, Philippines – Fear and alarm spread on social media Thursday, April 21, as Filipino voters learned that their personal information, which had been stolen during the Commission on Elections data breach, were already uploaded to a free-for-all site.

On the site, people can type in their names to check if their personal information is part of the leak.

To people’s horror, as well, anyone can view any voter’s data, just by conducting the simple search.

Some social media users tried to make light of the situation.

Others urged everyone to stop spreading the link as it could be dangerous.

One netizen advises people to be cautious, moving forward from this leak.

Rappler also urges the public not to share the link to the site, as doing so would make those whose information have been exposed even more vulnerable.

Be a wise netizen. – with reports from Aldrin Brosas & John Paul Laban/Rappler.com

Aldrin Brosas is a Rappler social media intern and a Communication Arts major from Aquinas University of Legazpi.

John Paul Laban is an AB Communication junior from Ateneo de Naga University. He is also an intern at Rappler.