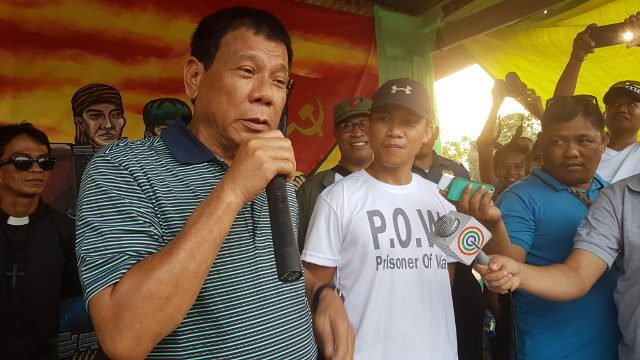 Duterte revealed this agreement on Tuesday, April 26, as he spoke to the community in Barangay Batang in Tulunan, North Cotabato, before the release of PFC Eduardo Hilaga Jr.

Hilaga is the 6th of the 11 prisoners of war whom the NPA has released to Duterte this week. Five POWs are still being held by the rebels in southern Mindanao.

Duterte said he talked with NDF founding chairman Sison via Skype Monday night. Sison is in The Netherlands.

(Now it’s time to stop. I talked with Sison last night on Skype. The military in the other room did not know I was talking to Sison. Since 1970 I’d been listening to Sison because I was among the first members of the Kabataang Makabayan. Now, I am 70 years old, still there is war. He was my teacher, so I told him, sir, please come home, let’s talk. We are always at war, what will happen? So he promised to me if I win the presidency, he will come home and I will bring him here, let’s have a program.)

A ceasefire, according to Duterte, is necessary for leaders of different groups to talk and hopefully achieve peace. “It will take about two to three years, but we must talk,” he told reporters.

A teary-eyed Hilaga told reporters he was taken by the rebels on April 21, when the NPA established a checkpoint along Malasila, Makilala, North Cotabato.

Rushing on his motorbike, and to report to his headquarters, he identified himself at the checkpoint as member of the 7th Infantry Brigade of the 602nd brigade based in Tulunan. He thought those manning the checkpoint were fellow soldiers.