The survey showed 30% of 4,000 respondents saying they would pick the Camarines Sur representative for vice president. 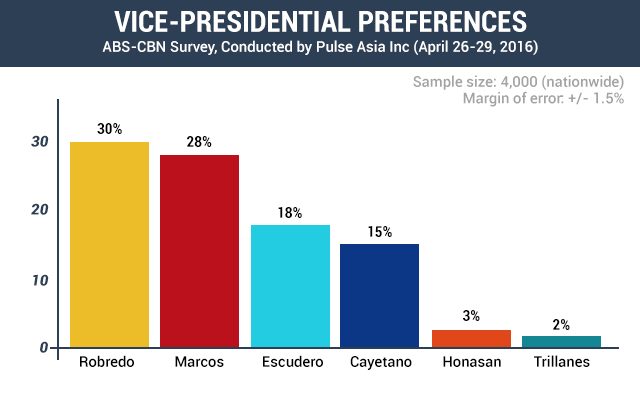 Marcos saw his numbers dip by 3 percentage points, bringing his preference rating down to 28% from the last ABS-CBN poll conducted April 19 to 24.

The survey’s margin of error of 1.5%, however, puts the two contenders at a statistical tie.

Senator Francis Escudero was a distant 3rd at 18%, unchanged from his showing in the previous survey. Senator Alan Peter Cayetano likewise saw his numbers unchanged at 15%.

Senators Antonio Trillanes IV and Gregorio Honasan were at the tail-end of the list with 2% and 3%, respectively. Robredo is the top vice presidential candidate among voters in the Visayas, obtaining a 42% preference rating. Marcos, meanwhile, is the top pick in Metro Manila (42%) and the rest of Luzon (33%).

Robredo and Marcos are also the leading vice presidential picks among all socio-economic classes.

Meanwhile, 28% of Filipino voters would consider voting for Escudero if their original candidate for the position backs out of the race, making him the top alternative vice presidential bet.

The results of the latest ABS-CBN survey were first released via a post on the TV network’s official website late Tuesday night, May 3. The full survey report was released Wednesday morning, May 4. – Rappler.com