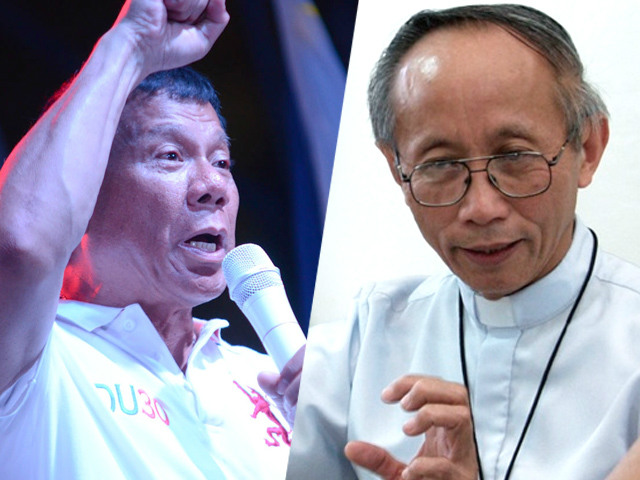 MANILA, Philippines – An archbishop in Mindanao, the turf of Davao City Mayor Rodrigo Duterte based on recent surveys, slammed the presidential candidate for more than 1,400 extrajudicial killings in his own city.

In one of the strongest pastoral letters on the May 9 elections, Cagayan de Oro Archbishop Antonio Ledesma also condemned adultery as “sinful and immoral.”

Duterte himself has said he is willing to kill to stop crime in the Philippines. He has also admitted that he is a womanizer.

In his pastoral letter titled “A Matter of Conscience,” Ledesma said, “Candidates who have not undergone change themselves and live moral lives are not worthy and capable of changing our society.”

“Change begins within each one of us. It is we as a people who can change our society.  So once again, we appeal to you to vote according to your conscience. And to vote for candidates of conscience – i.e., persons of moral integrity,” he added in his letter on Monday, May 3.

Of the 3 election-related pastoral letters received by Rappler recently, this is the only one that singles out a presidential candidate. Ledesma just referred to the candidate, though, as “the Mayor” of Davao City.

While Catholic bishops do not explicitly campaign for or against any specific candidate, Ledesma’s mention of “the Mayor” is telling.

It is also striking that this statement comes from one of the strongest Catholic voices in Mindanao, the southern Philippine island group that is the country’s poorest.

Duterte, whose ratings continue to rise in Mindanao, has brandished himself as the first soon-to-be president from the southern Philippines.

Born in Iloilo City, Ledesma has served in Mindanao since 1980, when he became assistant parish priest in Siay, Zamboanga del Sur.

Ledesma, 73, belongs to the Jesuits or the Society of Jesus, the biggest male religious order in the Catholic Church, which runs Ateneo universities across the Philippines.

Ledesma and Duterte, however, differ on key issues.

‘Thou shall not kill’

Ledesma said Duterte, for one, should be accountable for the extrajudicial killings in Davao City.

He cited a “deeply disturbing report on Davao City” that he received recently.

This report said that from 1998 to 2015, the Commission on Human  Rights and Human Rights Watch “have documented 1,424 extrajudicial killings” there.

Unfortunately, “none of the perpetrators of the so-called ‘Davao Death Squad’ have been apprehended.”

“The prime responsibility for the inaction over these unsolved crimes must rest squarely on the Mayor and local government officials. A city with such a high rate of unsolved killings cannot be called a city of peace and order,” Ledesma said.

Ledesma explained that human life “is sacred.” He referred to the fifth commandment: “Thou shall not kill.”

He said: “As Christians, we believe in the dignity of every person made in God’s image and from which flow human rights – the most basic of which is the right to life. The Church proclaims the Gospel of life and opposes the culture of death.”

“Some manifestations of the culture of death are abortion, war, capital punishment – and extra-judicial killings. These summary killings, without formal charges and due process, can never be justified – whether or not the victims are suspected criminals or rebels or workers on strike. These killings are illegal, immoral and sinful,” Ledesma said.

No to ‘autocratic regime’

In his statement, Ledesma mentioned other concerns in choosing candidates.

He said: “Adultery is sinful and immoral, a violation of the sixth and ninth commandments. Can a genuine Christian, in conscience, vote for those who flaunt their infidelities?”

He advised them, too, to avoid “corrupt candidates” and those “who destroy the environment through irresponsible logging and mining, and issue permits that destroy our natural resources.”

He then reminded voters not to sell their votes.

“We urge you to vote for candidates of conscience with a consistent pro-life ethic and reject candidates who promote the culture of death,” he said.

Ledesma added: “The choice you make will determine whether we live in the light and progress as a nation or bring back the darkness that we have experienced and rejected in the past – an autocratic regime characterized by violence, human rights violations and corruption, and a reign of terror and greed.”

Like Ledesma, Cotabato Archbishop Orlando Cardinal Quevedo stressed the sanctity of life in his 6-point guidelines for the May 9 polls.

Quevedo said in a circular letter: “The immoral termination of the life of the unborn and of innocent people, the termination of life even of suspected criminals in utter disregard of due process, are very serious violations. Select a candidate who by belief and practice demonstrates support for the right to life.”

Quevedo, the first cardinal from Mindanao, also said Catholics should support candidates who push for peace in the southern Philippines. “Select a candidate who will be a just peacemaker,” he said.

On top of these, he stressed the need for moral integrity, respect for faith, an option for the poor, and a good track record.

He said voters should “not be mesmerized by surveys and claims of change by any means.”

“Follow the road of the Christian disciple, faithful to the Lord Jesus and to the teachings of his Church,” Quevedo told Catholic voters.

Other priests, for their part, have said they fear a Duterte presidency.

Within their circles, a sentiment among Catholic bishops is that Duterte should not be president.

A priest explained to Rappler that Duterte is the “antithesis” of many Christian values, such as respect for women and for human life. “His words, actions, and platforms aren’t acceptable as a man of integrity,” he said.

“He thinks of himself as beyond the requirements of moral standards, which is very dangerous of a leader,” the priest added.

The Catholic Bishops’ Conference of the Philippines (CBCP) earlier hit Duterte for cursing Pope Francis in a speech.

In a rare and strongly worded statement titled “Mayor Duterte?” issued on December 1, 2015, the CBCP also described crimes such as murder and adultery as part of “a great scourge of Philippine politics.”

Months later, on May 1, the CBCP issued a pastoral letter signed by its president, Lingayen-Dagupan Archbishop Socrates Villegas, for the May 9 elections.

Without naming any candidate, the CBCP said, “A choice for a candidate who takes positions that are not only politically precarious but worse, morally reprehensible, cannot and should not be made by the Catholic faithful and those who take their allegiance to Christ and his Kingship seriously.” – Rappler.com