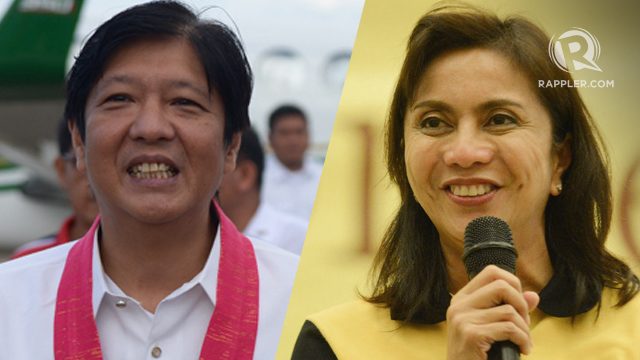 Facebook Twitter Copy URL
Copied
The next vice president might win by a 'hairline,' based on the last SWS survey before voters troop to the polls on May 9

Marcos and Robredo are in a statistical tie, with the former at 29% and the latter at 28% voter preference, the results of the survey, conducted May 1-3 among 4,500 registered voters, showed.

The results of the surveys have all been released first on BusinessWorld.

BusinessWorld, quoting political analyst and University of Santo Tomas professor Edmund Tayao, said that the next vice president could win by a “hairline,” based on the survey results.

In the same survey, Davao City Mayor Rodrigo Duterte keeps his lead in the race for the presidency, despite the issue of hidden wealth levied by Trillanes against him.

Meanwhile, Senate President Franklin Drilon is the top choice of voters for the Senate, leading the so-called “magic 12” in the SWS survey results.

The survey comes just days before more than 54 million Filipinos are set to troop to polling precincts nationwide to vote on Monday, May 9.