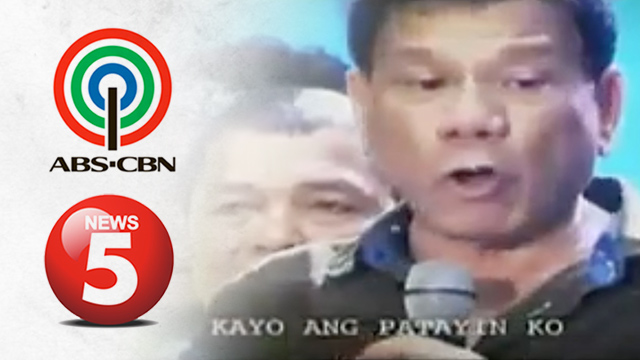 MANILA, Philippines – Television network ABS-CBN said it was their duty to air the controversial advertisement that features children attacking the suitability of leading presidential candidate Mayor Rodrigo Duterte for the highest post of the land.

In a statement posted on their web site, the TV giant said the political advertisement was reviewed by its ethics committed and was found to be compliant with the guidelines of the Commission on Elections (COMELEC).

“The controversial political advertisement being talked about in social media, which aired on ABS-CBN, was produced and paid for by Sen. Antonio Trillanes IV. Prior to the airing, ABS-CBN’s ethics committee reviewed the content of the material, which complies with the requirements of pertinent election laws,” the TV station said.

“By airing the said commercial, ABS-CBN is being consistent with COMELEC guidelines, which prohibit radio or television stations to discriminate in the sale of air time against any political party or candidate. We are duty bound to air a legitimate ad,” it added.

Senator Alan Peter Cayetano on Friday, May 7, secured a temporary restraining order against the continued airing of the political advertisement. He is Duterte’s running mate.

Cayetano filed a petition for preliminary injunction against the top executives of the network before the Regional Trial Court of Taguig City, where his wife is the mayor.  The respondents are ABS-CBN chairman Eugenio “Gabby” Lopez III, Augusto Almeda-Lopez, Carlo Katigbak, Socorro Vidanes, and August Benitez.

Meanwhile, TV 5 denied airing the said advertisement. They said they decided not to air because there were requirements that were not complied with.

GMA 7 has yet to issue a statement on the issue. The Movie and Television Review and Classification Board (MTRCB) said the Commission on Elections (COMELEC) has the sole jurisdiction to regulate political advertisements.

On Thursday, May 5, supporters of Mayor Duterte criticized TV stations ABS-CBN, GMA-7 and TV-5 for airing the advertisements paid for by vice-presidential candidate Senator Antonio Trillanes. The ad showed clips of the Davao mayor cursing and making his controversial rape remark. They were spliced with videos of children rhetorically asking if Duterte is the model that adults want for them.

Cayetano said that the advertisement was part of a bigger conspiracy against him. – Rappler.com