Robredo vs Marcos: Who is the better fit for a Duterte presidency? 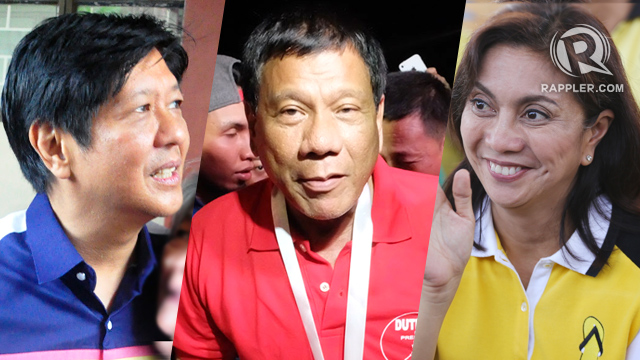 MANILA, Philippines – Which vice presidential candidate will be a better fit for a Duterte presidency: Leni Robredo or Ferdinand “Bongbong” Marcos Jr?

Political analysts Clarissa David and Richard Heydarian answered this question Tuesday, May 10, during Rappler’s live coverage of the 2016 elections.

Davao City Mayor Rodrigo Duterte, meanwhile, enjoys the lead in the presidential race with 15,644,122 or 38.6% of the total votes.

For David, Robredo is a “great fit” for Duterte because of two things: her focus on the social sector, and her “very clear interest” in addressing poverty through government offices created for the purpose.

“She has on-the-ground experience, she knows what the loopholes are, she knows what the barriers are, she has a very clear idea of what needs to be done. And these are not motherhood statements proclaiming we need to spend money on these and that. She’s talking about streamlining processes, these are very detailed arguments that can only come from somebody who has dealt with the system,” she explained.

Duterte, she said, will need a “strong person” like Robredo to look at social issues, since the presidential front -unner seems to be focused on peace and security.

But Heydarian said a Duterte-Robredo only looks like a good balance on the surface.

“For every argument you can make for Leni, you can also make it for Bongbong. He was a good governor in Ilocos, he has delivered competently,” Heydarian said.

“But of course, Leni has the Jesse Robredo aura, while he has the Marcos dictator aura, so the skeleton in the closet is a problem for him,” he added.

What about a possible tandem with Marcos? Heydarian said this tandem will have to deal with perceptions.

“I think perception is very important in politics. Clearly a Marcos-Duterte tandem kind of raises the specter of regime change, possibly. That’s the impression of some people, that if you’re going to have a Duterte-Marcos, this is not going to be a 6-year deal,” he said.

Explaining further, he lamented the lack of maturity of Philippine democracy and how Filipinos are falling for the “strongman syndrome.”

“[The strongman syndrome is] this simplistic, misguided idea that you can solve complicated, 21st century governance problems by just putting a tough-talking guy at the top,” Heydarian added.

He, however, urged the public not to preempt Marcos.

“But of course, let’s be fair, Bongbong Marcos has been very clear: ‘I’m not my father in the sense that I’m not gonna impose Martial Law.’ With respect to the more flamboyant incoming president Duterte, well, he has made a lot of people jitter because he has openly jested or maybe even seriously talked about dictatorship.”

David said when Marcos was leading in the early hours after the elections, “you can sense the heartbreak in people.”

“People who are governed by Bongbong Marcos in Ilocos are very supportive of him, the Marcoses did real governance, but they cannot deny – but they have been denying – that this is the history of the Philippines, and this is what happened. It will always be there, throughout his 6 years as vice president, that is always something that they’re going to have to deal with.”

Heydarian said it will also matter what Cabinet position will go to Robredo and Marcos. For instance, he thinks Marcos will be a good foreign secretary.

“I think he properly appreciates the complexities of dealing with complex issues like the South China Sea, dealing with America. He’s gentle, charming, soft-spoken,” he explained.

To this, David answered: “But the world knows Marcos. This is what the world is criticizing us for right now.”

Heydarian said the very fact that Duterte is now poised to be the next president of the Philippines and Marcos has made it this far in the vice presidential race “already has raised eyebrows around the world about the maturity of the Philippine democracy.”

Whatever the outcome of the vice presidential race may be, he urged the one who will lose to be sportsmanly about the loss and “think about what is the interest of the country and not to shed doubt on the credibility of the elections.”

On Tuesday, the Marcos’ camp already raised the possibility of dagdag-bawas (point-shaving) in the Commission on Election’s (Comelec) unofficial transmission of votes. On the same day, Robredo urged Marcos to stop “unfair” allegations of cheating.

Days before May 9, Marcos had already accused Robredo’s ruling Liberal Party of plotting to cheat its way to victory or scheming to oust Duterte if the mayor and Robredo won.  Robredo countered that Marcos was apparently using her to woo Duterte’s supporters as she denied the allegation.

Marcos based this allegation on the results of the last few surveys by various pollsters days ahead of the elections, showing him and Robredo in a statistical tie or Robredo ahead of him. He had alleged that the survey results had been manipulated to condition the public’s mind that Robredo’s ratings were surging. – Rappler.com